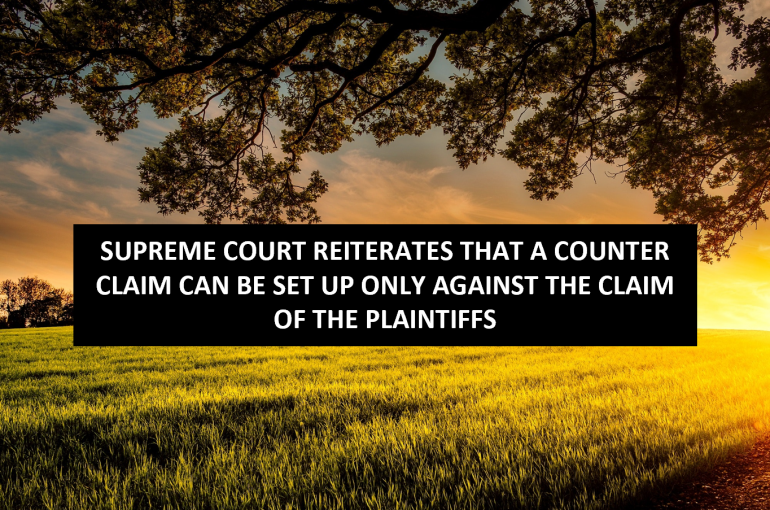 Recently, a three Judge Bench of the Supreme Court comprising of Justice Uday Umesh Lalit, Justice S. Ravindra Bhat and Justice Sudhanshu Dhulia made an observation regarding counter claims to be filed only against the claim of the plaintiffs, vide Judgment dated 17-08-2022 in Satyender and Others vs Saroj and Others, Civil Appeal No. 4833 of 2022.

c) The Defendant No. 1-Son (Sub-Tenant) submitted that he was not at all concerned with the said Suit Property, as he was very young, when his father, the Defendant No. 2 sub-let the Land in his favour, in collusion with the revenue officials.

d) The Defendant No. 2-Father submitted in his written statement that he and his brothers inherited the tenancy from his father, Mr Ganpat Rai and thus, continued the tenancy under Ms Ram Kaur. He denied that they were under tenancy of the Plaintiffs.

e) Additionally, the Defendant No. 2 filed a Counter Claim stating that they had tenancy / possession over two other plots, which did not form part of the Suit Property.

The Trial Court dismissed the Suit on the ground that the Plaintiffs could not prove their right on the Suit Property and that there was any sub-tenancy created in favor of the Defendant No. 1.

Aggrieved, the Plaintiffs filed an Appeal before the lower Appellate Court, which was dismissed on multiple grounds including that the Plaintiffs could not prove that tenancy of Mr Ganpat Rai had come to an end when he surrendered his tenancy to Ms. Ram Kaur in 1976 and that the Plaintiffs failed to implead the brothers of Defendant No. 2 in the Suit, as all of them had collectively inherited the tenancy from their father, Mr Ganpat Rai.

Aggrieved, the Plaintiffs filed an Appeal before the Punjab and Haryana High Court (Second Appeal) in Saroj and Others vs Satyender and Anr., RSA No. 140 of 2009 (O&M), which was allowed with the following observations, vide Judgment dated 19-07-2017:

ii) Further, the Counter Claim filed by the Defendant was with respect to tenancy over Killa nos. 6//18 and 23, but the same were not a part of the Suit Property. The High Court observed that as per Order 8 Rule 6A of the Code of Civil Procedure 1908 (CPC) (Counter-claim by defendant), a counter claim by a defendant has to be limited to raising a counter claim to the claim of the plaintiff and an independent claim not concerning the plaintiff cannot be raised as a counter claim. Hence, the High Court held that in this case, the Defendants did not have cause of action against the Plaintiffs in so far as Killa nos. 6//18 and 23 were concerned and thus, the High Court rejected the Counter Claim.

Aggrieved, the Defendants filed an Appeal before the Supreme Court. The Apex Court passed a Judgment dated 17-08-2022 and made the following observations:

2) That the High Court rightly interpreted Order 8 Rule 6A of CPC and observed that “a counter claim can be set up only “against the claim of the plaintiffs”. Hence, the Defendant is barred from raising a Counter Claim with respect to such Khasra / Killa Nos. which were not a part of the Suit Property or in respect of which the Plaintiffs did not claim title / ownership in their Suit.

Based on the aforesaid observations, the Supreme Court held that the Trial Court and the Lower Appellate Court had already evaluated the evidence and decided that the Plaintiff had failed to prove their case as owner of the Suit Property. Further, the High Court erred in allowing the claim of the Plaintiff in respect of Khasra No. 7//13 and 21//3/2, which were not a part of the Suit Property. Hence, the High Court Judgment dated 19-07-2017 to such extent was set aside.

Under the law, a defendant in a suit has the option of either filing a counter claim or a set off to the plaintiff’s case. Generally, a set off is filed in a money suit where the defendant wants a set off of his claims against those of the plaintiff.

In the present case, the Supreme Court has dealt with this aspect of the case that defendants’ counter claim must be within the four corners of the plaintiff’s plaint and should not go beyond the same.