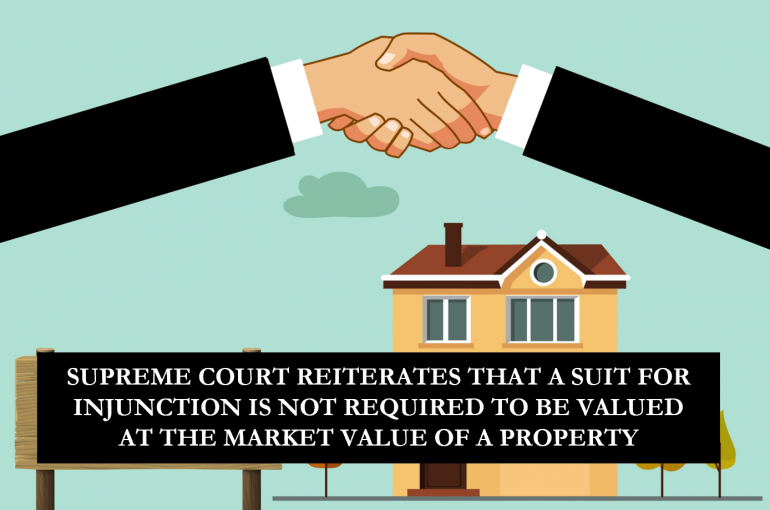 A two Judge Bench of the Hon’ble Supreme Court of India comprising of Justice Dinesh Maheshwari and Justice Vikram Nath passed a Judgment dated 17-06-2022 in the case of Bharat Bhushan Gupta v. Pratap Narain Verma & Anr. (Civil Appeal No. 4577 of 2022, Arising out of SLP (C) No. 9780 of 2019) and held that a suit for mandatory and prohibitory injunction is not required to be valued at the market value of a property.

In the present case, the Plaintiff (Appellant herein) instituted a case for mandatory and prohibitory injunction and recovery of damages against his elder brother and his Munshi before the Court of Senior Civil Judge, South West District, Dwarka, New Delhi (Trial Court). The Plaintiff was the owner of Plot No. RZ-28, Indira Park Extension, Near Hanuman Mandir, Uttam Nagar, New Delhi admeasuring 252 sq. yards (Property). He had purchased the Property in the year 1981. The Plaintiff had raised three-rooms tin shed on the said Property in the year 1983-84 and since the Property was lying unutilised, the Defendant No. 1 (Respondent No. 2 herein), elder brother of the Plaintiff, made a request for using the Property for storage purposes in connection with his work as a building contractor. Accordingly, the Defendant No. 1 was admitted as a gratuitous licensee at will on the said Property.

As the Defendants were not ready and willing to vacate the Property, the Plaintiff instituted a Suit for Mandatory and Prohibitory Injunction and Recovery of Damages against Defendants before the Trial Court.

As the matter came up for hearing, the Defendant No. 2 alleged that the Property did not belong to the Plaintiff and that the Suit was instituted based on forged and fabricated documents and with a sole purpose to grab the Property. The Defendant No. 2 also filed an Application under Order 14 Rule 5 of Code of Civil Procedure, 1908 (CPC) (Power to Amend and Strike Out, Issues) seeking orders for framing of additional issues, which was dismissed by the Trial Court vide separate Order dated 31-08-2021. He also filed an Application under Order 7 Rule 11 CPC (Rejection of Plaint) stating that as the value of the Property at the time of the filing of the Suit was Rs. 1.8 Crores, as admitted by the Plaintiff, the Trial Court did not have the jurisdiction to adjudicate the Suit. The Trial Court dismissed the said Application with a cost of Rs.2000/- vide Order dated 11-07-2018.

“18. In the facts and circumstances of the instant case, the testimony of the plaintiff has been recorded and the plaintiff has himself stated to the effect that the market value of the suit property was around Rs.1.8 crores at the time of the filing of the suit. It is apparent thus, that the valuation of the suit for the purpose of Court Fees and jurisdiction at Rs.250 for each of the reliefs of injunction is wholly arbitrary.

With above directions, the High Court disposed of the Petition.

Impugning the Order dated 18-03-2019, the Plaintiff (Appellant) approached the Hon’ble Supreme Court of India seeking Special Leave to Appeal. At the outset, the Apex Court on 26-04-2019, while issuing Notice, stayed the operation of the Impugned Order of the High Court.

The Bench after perusing the facts and the submissions of the Parties to the dispute, referred to Section 7 (iv)(d) of the Court- Fees Act, 1870 which is reproduced below:

The amount of fee payable under this Act in the suits next hereinafter mentioned shall be computed as follows: –

The Supreme Court made an observation that, the Plaintiff has valued the Suit for the purpose of Court Fees, jurisdiction at Rs. 250 for each of the reliefs for injunction and at Rs. 1 lakh for damages; and has paid the Court Fees accordingly. The Bench held that the High Court erred in not considering the unquestionable principle of law that a Suit for Mandatory and Prohibitory Injunction is not required to be valued at the market value of the Property.

“9.1. It remains trite that it is the nature of relief claimed in the plaint which is decisive of the question of suit valuation. As a necessary corollary, the market value does not become decisive of suit valuation merely because an immovable property is the subject-matter of litigation. The market value of the immovable property involved in the litigation might have its relevance depending on the nature of relief claimed but, ultimately, the valuation of any particular suit has to be decided primarily with reference to the relief/reliefs claimed.

“14. For what has been discussed hereinabove, we may simply put the upshot in other words that the High Court has totally omitted to consider the applicable provision of law i.e., Section 7(iv)(d) of the Court Fees Act as also the principles of law stated in the very same decision being referred to and relied upon in the impugned order itself. Thus, the impugned order deserves to be set aside.”

Therefore, the Supreme Court while allowing the Appeal set aside the Impugned Order dated 18-03-2019 passed by the High Court and restored the Order of the Trial Court dated 11-07-2018.