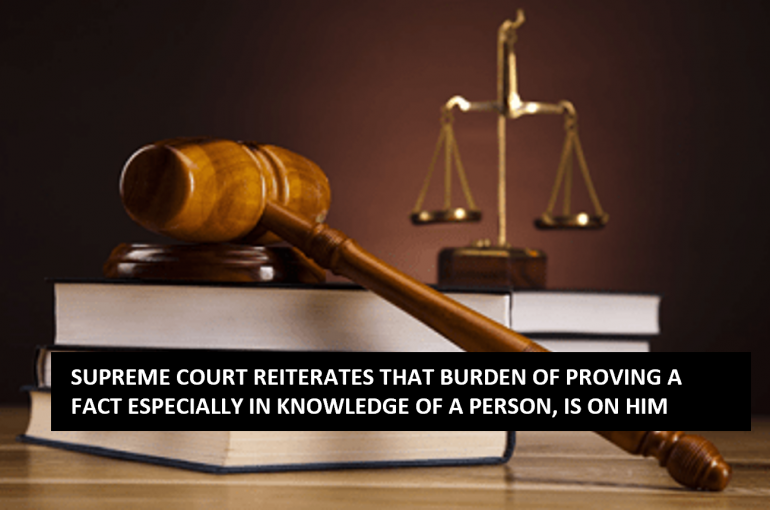 SUPREME COURT REITERATES THAT BURDEN OF PROVING A FACT ESPECIALLY IN KNOWLEDGE OF A PERSON, IS ON HIM

In a recent Criminal Appeal, the Supreme Court comprising of three Judge Bench of Chief Justice N.V. Ramana, Justice Krishna Murari and Justice Hima Kohli in Bidyadhar Praharaj vs State of Odisha Criminal Appeal No. 860 of 2022 vide Order and Judgement dated 20.05.2022, upheld the Impugned Order dated 08.11.2016 passed by the High Court of Odisha at Cuttack and reaffirmed that burden of proving a fact especially in knowledge of a person, is on him in terms of  Section 106 (Burden of proving fact especially within knowledge) Evidence Act, 1872.

In the post-mortem, it was revealed that the Deceased died due to compression in lower part of the neck. Thus, death was homicidal in nature. Therefore, a Charge Sheet was filed against the Appellants and Accused No.3  for offences under Sections 302 (Punishment for murder), 201 (Causing disappearance of evidence of offence, or giving false information to screen offender), 109 (Punishment of abetment if the act abetted is committed in consequence and where no express provision is made for its punishment) read with 34 (Acts done by several persons in furtherance of common intention) of IPC.

Being aggrieved by the Order and Judgement dated 30.03.2015 of Sessions Court, the Appellant preferred an Appeal before the High Court of Odisha at Cuttack. The High Court vide Impugned Order dated 08.11.2016 acquitted the Accused No.3 from all charges while upholding the conviction of Accused No. 1 and 2. However the conviction under Section 302 IPC was modified to conviction under Section 304 (II) IPC, thereby reducing the term of rigorous imprisonment for a term of 5 years and fine of Rs. 10,000/-

While the Respondent State contended that all the facts i.e. the relationship between Accused No.3 and Deceased, exchange of money between Accused No.3 and Deceased, date, place and time of murder of Deceased, and the presence of Appellants inside the tenanted portion of the house, has rightly observed that the incident did occur at the time and place alleged by the Prosecution wherein Appellants were definitely involved.

The Apex Court after hearing both the Parties observed that the relevant facts and contentions made by the Appellants and the Respondent raises the key issue which requires determination in the instant case is that whether the Prosecution has successfully discharged its burden of proof, and that the chain of events has been successfully established so as to attract application of Section 106 of the Evidence Act, 1872.

In the instant case, the Apex Court thus held that the Prosecution had succeeded in establishing intention of the Appellants for the commission of the offence. Therefore, having regard to the above facts and reasons stated therewith, the Supreme Court held that the entire sequence of events strongly point towards the guilt of the Appellants, and that the Appellants have failed to offer any credible defense in this regard. Thus, the Apex Court reaffirmed the Order of the High Court and the Appeals were accordingly dismissed.