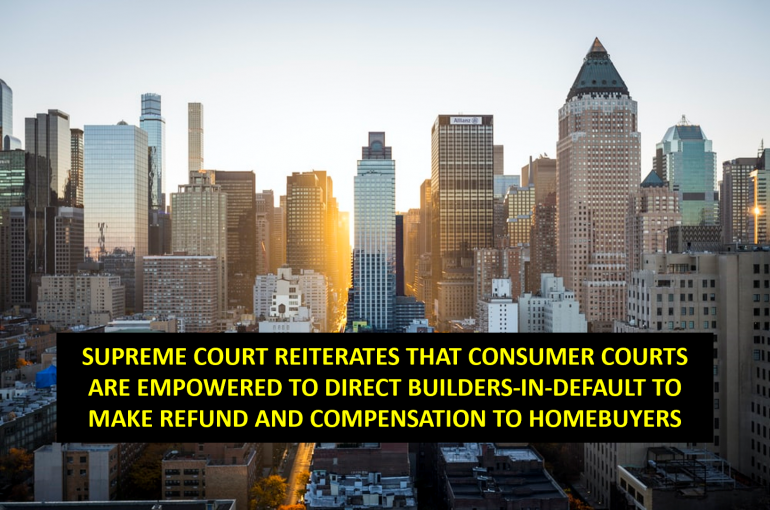 Recently, a three Judge Bench of the Supreme Court comprising of Justice Uday Umesh Lalit, Justice S Ravindra Bhat and Justice Pamidighantam Sri Narasimha passed a Judgment dated 07-04-2022 in a matter of Experion Developers Pvt Ltd vs Sushma Ashok Shiroor Civil Appeal No. 6044 of 2019 and Sushma Ashok Shiroor vs Experion Developers Pvt Ltd Civil Appeal No. 7149/2019 and reiterated that consumer courts are empowered to direct builders-in-default to pay compensation and refund to homebuyers.

In this case, one, Sushma Ashok Shiroor filed a Complaint (Complainant) before the National Consumer Disputes Redressal Commission (NCDRC) against Experion Developers Private Limited (Builder) alleging failure to deliver possession of an apartment in Windchants, Sector 112, Gurgaon, Haryana (Apartment). The Complainant had paid Rs. Rs.2,06,41,379/- to the Builder and a Builder-Buyer Agreement was executed on 26-12-2012 (Agreement). As per the terms of the said Agreement, the Builder was supposed to handover possession of the Apartment within 42 months of approval of building plan, i.e. on or before 26-06-2016. The Complainant pleaded that she was in desperate need to shift to the said Apartment and hence, made regular phone calls and personal visits to the Builder office. However, the Builder failed to handover the possession as per the terms of the Agreement.

Therefore, the NCDRC directed the Builder to refund Rs.2,06,41,379/- paid by the complainant along with interest @9% p.a. from the date of last deposit before the due date of possession till actual payment on the amount paid before due date of possession and after this date if any amount is deposited, then from the date of deposit till actual payment. The NCDRC reduced the interest from 24% p.a. (as claimed) to 9% p.a. on the ground that if allottees opt out of the project and seek refund when the project is more or less complete, the sustainability of the project could be in danger, therefore, a balanced view is to be taken in such matters.

1) That the clauses in the Agreement are one-sided and unfair and therefore, not binding, as the Complainant had no other option but to sign on the dotted line of the Agreement drafted by the Builder. Thus, they constitute unfair trade practice under Section 2 (1) (r) of the Consumer Protection Act 1986 (Act). Hence, the Complainant is not bound to accept the possession of the Apartment and is also entitled to seek refund of amount deposited by her along with interest.

2) That the Supreme Court has in various cases held that remedies available under Consumer Protection Act are over and above the other remedies available under special statutes such as the Real Estate (Regulation and Development) Act 2016 (RERA Act). Further, Section 88 of the RERA Act (Application of other laws not barred) provides that “The provisions of this Act shall be in addition to, and not in derogation of, the provisions of any other law for the time being in force”.

3) Further, under Section 14 of the Consumer Protection Act (Finding of the District Forum), the consumer court is well within its power to decide upon a case where compensation and refund has been sought by a homebuyer for deficiency in not delivering the flat as per the terms of the builder buyer agreement. The homebuyer can also seek for compensation with possession of the Apartment. In this case, as the Complainant only asked for refund and compensation, the NCDRC has correctly exercised its power under Section 14 (Finding of the District Forum) read with Section 22 (Power of and procedure applicable to the National Commission) of the Act and passed directions for refund of amount with interest.

4) Hence, consumer courts are empowered under the Act to award just and reasonable compensation to homebuyers and to direct for removal of deficiency of services and unfair trade practices resorted by builders.

5) Further, the Apex Court held that the NCDRC rightly directed the Builder to pay interest @ 9% p.a. but the said interest is payable from the date of deposit of the amounts and not from date of last deposit, as wrongly directed by NCDRC.

Thus, based on the aforesaid observations, the Supreme Court reiterated that Consumer Protection Act and RERA Act do not contradict each other and hence, the consumer courts are empowered to direct payment of refund and compensation with or without handing over possession of flat to homebuyers. As a result, the Apex Court partly allowed the Civil Appeal No. 7149/2019 filed by the Complainant and dismissed the Civil Appeal No. 6044/2019 filed by the Builder.

The Supreme Court has consistently held that a consumer (buyer) can seek relief simultaneously under the RERA Act and Consumer Act. This is certainly beneficial for the buyer.  However, despite pro buyer orders, the buyer invariably has to wait for years as builders always make it a point to delay execution and sometimes this can unfortunately take several years.