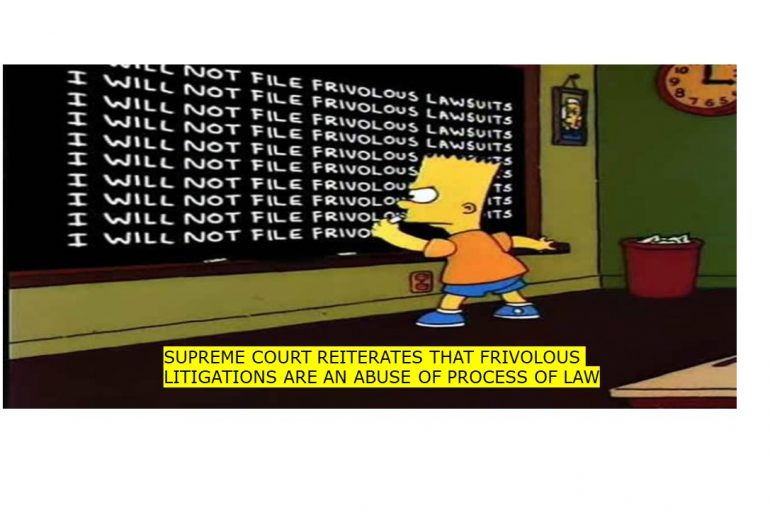 In a recent Special Leave Petition (Civil), a two Judge Bench of the Supreme Court, comprising of Justice C.T. Ravikumar and Justice Sudhanshu Dhulia passed an Order and Judgement dated 22.06.2022 in ‘Charu Kishor Mehta v. Prakash Patel & Ors., Special Leave Petition (Civil) No. 11030 /2022’ and confirmed the Order and Judgement dated 13.06.2022 passed by the High Court of Bombay, and held that filing frivolous cases in a court of law is an abuse of process of law.

In this case, the Petitioner-Plaintiff had availed credit facility from the Oriental Bank of Commerce, Mumbai and had outstanding dues running approximately to the tune of Rs. 277,00,00,000/-. The Bank ultimately moved an Application before Debts Recovery Tribunal (‘DRT’) for recovery of its dues from the present Petitioner and others. This Application was allowed by the DRT, Mumbai by Order dated 24.07.2006 and consequently a Recovery Certificate was issued and the borrowers and guarantors were directed to repay the outstanding dues. This Order dated 24.07.2006 was challenged before the Debts Recovery Appellate Tribunal (‘DRAT’) and further challenged several other orders and measures which were subsequently taken by the Bank for the recovery of the amount under the provisions of the Securitisation and Reconstruction of Financial Assets and Enforcement of Security Interest Act, 2002 (‘SARFAESI Act’). On 30.09.2013, the Bank had assigned the debts concerning the present dispute as well as the underlying securities in favour of M/s. Phoenix A.R.C. Pvt. Ltd. (Secured Creditor). Thereafter, a settlement took place between the Petitioner and the Secured Creditor and a Settlement Deed was signed between the Parties on 01.10.2013. The Petitioner, however failed to repay the amount or even handover the possession of the secured asset to M/s. Phoenix A.R.C. Pvt. Ltd. In clear breach of the Settlement Deed dated 01.10.2013, attempts were being made by the Petitioner in obstructing the execution of the Recovery Certificate by filing numerous proceedings before the Authorities under the SARFAESI Act as well as before the Bombay High Court and the Supreme Court of India.

In one such Suit filed by the Plaintiff in a Trial Court, the Defendant had moved an Application under Order VII, Rule 11 of the Code of Civil Procedure, 1973 for rejection of the Plaint. The Trial Court after hearing all the concerned parties, allowed the Application under Order VII, Rule 11, and rejected the Plaint on the ground that the Plaintiff had approached the DRT as well as the Deputy Registrar, Co-operative Societies and the Suit filed before the Trial Court was only to nullify the effect and operation of the auction proceedings conducted by the Recovery Officers, DRT under the provisions of the SARFAESI Act. The Petitioner filed an Appeal before the Bombay High Court against this Order of the Trial Court which was dismissed by the High Court vide Order dated 13.06.2022.

Aggrieved by the Order of the Bombay High Court dated 13.06.2022, which is challenged before the Supreme Court. The Apex Court, after referring to Section 34 of the SARFAESI Act, observed that a full reading of Section 34 shows that the jurisdiction of the civil court is barred in respect of matters which a Debts Recovery Tribunal or an Appellate Tribunal is empowered to determine in respect of any action taken “or to be taken in pursuance of any power conferred under the SARFAESI Act. The Supreme Court held that Trial Court was justified in allowing the Application under Order VII, Rule 11 of the CPC. The Bombay High Court Order dated 13.06.2022 was also upheld by the Apex Court.

The Supreme Court, further observed that it was not only the proceedings
before the Civil Court initiated by the Petitioner which was an abuse of the law, but the entire conduct of the Petitioner was a clear reflection of the fact that the Petitioner has been doing so repeatedly, after being a signatory to the Settlement Deed dated 01.10.2013. The present Petition was held to be an abuse of the process of law and to cause harm to the other parties to the litigation, some of whom may have been needlessly drawn into the litigation.

The Apex Court referred to the case Subrata Roy Sahara v. Union of India (2014) 8 SCC 470, where it was held that “The Indian judicial system is grossly afflicted, with frivolous litigation. Ways and means need to be evolved, to deter litigants from their compulsive obsession, towards senseless and ill-considered claims. One needs to keep in mind, that in the process of litigation, there is an innocent sufferer on the other side, of every irresponsible and senseless claim. He suffers long drawn anxious periods of nervousness and restlessness, whilst the litigation is pending, without any fault on his part.”

The Supreme Court, thus dismissed the Special LeavePetition and levied a cost of Rs. 5,00,000 on the Petitioner.