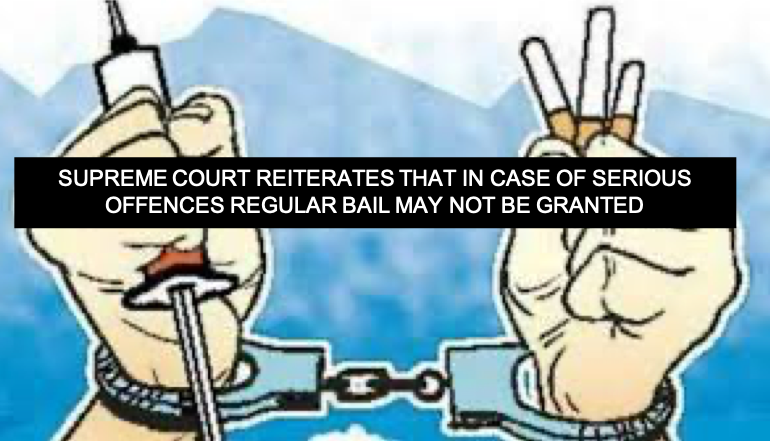 In a recent case decided by a three Judge Bench of the Hon’ble Supreme Court of India comprising of Chief Justice of India N.V. Ramana, Justice Krishna Murari and Justice Hima Kohli in the matter of Ramjhan Gani Palani vs. National Investigating agency and anr. Crl. No. 8942 of 2021, a Judgement dated 27th April, 2022 has been passed, whereby, the Apex Court dismissed the Special Leave to Appeal filed by the Petitioner, on the ground that there was sufficient material to deny the discretionary bail to the Petitioner.

The case of the Prosecution is that on receiving an intelligence input, the Directorate of Revenue Intelligence (DRI) had intercepted a Pakistani boat in the Indian Territorial Waters which was trying to escape on 21st May, 2019. The Indian Coast Guard had chased and caught the Pakistani boat with one captain and five crew members on board. The captain of the boat had admitted to dumping bags in the sea along with a satellite phone. The bags contained 211 packets of 236.622 Kgs of Narcotic substance, Heroin which was retrieved from the sea and coastal area. The investigation revealed that Narcotics were being brought into Gujarat from Pakistan through the sea route and the captain stated that the delivery had to be made at a particular position in the sea and communication had to be sent on Channel no. 8 and for which he was to use the call sign “Mohammed” and the Indian Counterpart was to respond with the sign “Ramzan”.

On receiving the aforesaid information, a radio operator deputed by the Indian Coast Guard conducted a hit and trial method by calling “Mohammed-Ramzan-Ramzan” on a very high frequency (VHF) Channel No. 16 and in response to the said call, the Petitioner who was on board in an Indian fishing boat replied with “Ramzan-haan bolo” on VHF Channel No.8.

The Prosecution’s version is that there was only one fishing boat with 12 crewmen in the immediate vicinity that belonged to the Petitioner. The captain and the crewmen appeared in neat and clean clothes and had managed to catch only 5 fishes even though the Petitioner claimed to be fishing on high sea for 4-5 days. Even the fishing net and the deck of the boat were found unsoiled which was clearly suspicious. As a result, the Petitioner was detained on a reasonable belief that he was the Indian recipient for the drug consignment brought into the Indian Territory by the Pakistani Ship.

Learned Special Judge, National Investigating Agency (NIA), Ahmedabad rejected the Regular Bail Application filed by the Petitioner vide Order dated 19th March, 2021. Aggrieved by the said Order, the Petitioner preferred an Appeal which was dismissed by the Division Bench of Gujarat High Court vide Order dated 19th October, 2021, whereby the High Court  held that there was more than a prima facie case made out against him.

Aggrieved by the High Court Order dated 19th October, 2021, the Petitioner filed an Appeal before the Supreme Court. The Apex Court passed a Judgement dated 27th April, 2022 and observed as follows:

2) The Learned Counsel for the Respondent opposed the Appeal and stated that after the arrest of six Pakistani Nationals on 24.05.2019, the Petitioner was arrested and a Complaint was registered under the provisions of the Narcotic Drugs and Psychotropic Substances Act, 1985 (NDPS Act) against all the seven accused. The Petitioner was charged with offences punishable under Sections 28 (Punishment for attempts to commit offences), 29 (Punishment for abetment and criminal conspiracy) and 30 (Preparation) of the NDPS Act and the punishment for the said offences would be imprisonment for a minimum period of ten years which can extend upto a maximum of twenty years.

3) The case was further transferred to the NIA on the orders issued by the Ministry of Home Affairs, Government of India. As per the Charge sheet filed before the NIA Special Court, nine Pakistani Nationals who were wanted accused were absconding and their role in this matter was still under investigation. It was urged that this case is related to smuggling of Narcotic drugs, for sale in India and for generating funds to promote terrorist activities which is a serious offence and hence it is a valid ground for denying relief of bail to the Petitioner.

4) The Supreme Court after carefully considering the arguments of both the Parties held that there is sufficient material to deny discretionary relief of bail to the Petitioner. The Apex Court further observed as follows:

10. The Petitioner has been chargesheeted for a serious offence where the minimum punishment prescribed is of ten years. We are, therefore, not inclined to exercise our discretion in favour of the Petitioner by interfering with the impugned Order, at present.

11. Needless to state that the observations made hereinabove, are limited to examining the prayer made by the Petitioner for grant of regular bail and shall not be treated as an observation on the merits of the case, particularly when the trial has yet to commence.

Thus, based on the aforesaid observations, the Supreme Court dismissed the Special Leave to Appeal and held that in case of serious offences regular bail may not be granted. Hence, the Appeal was dismissed.