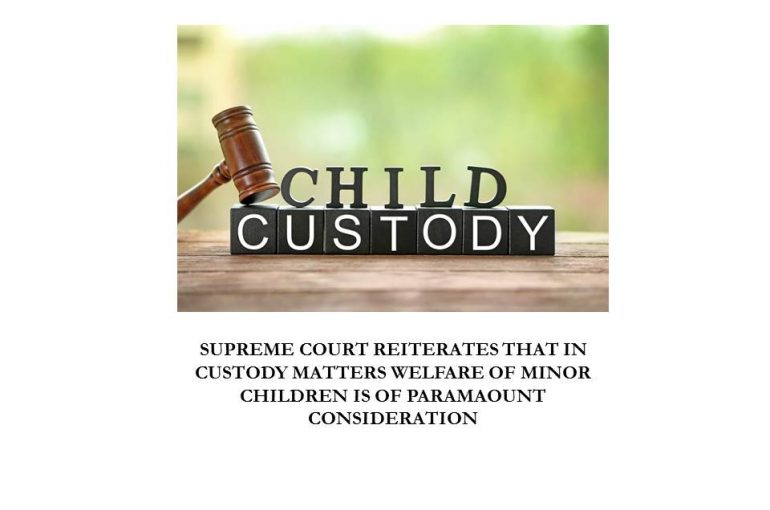 A two Judge Bench of the Hon’ble Supreme Court of India comprising of Justice M.R. Shah and Justice Aniruddha Bose passed a Judgment dated 09-06-2022 in the case of Swaminathan Kunchu Acharya v. State of Gujarat & Ors. (Criminal Appeal No. 898 of 2022) and reiterated that in case of custody of a minor child, the paramount consideration remains welfare and interest of the child.

In the present case, parents of one Pranav Acharya aged 5 years (hereinafter referred to as Corpus), used to reside and work in Ahmedabad. Unfortunately, both the parents of the Corpus died during the second wave of Covid­19. While the parents were infected with Covid-19, the minor Corpus was residing with his maternal aunt i.e. the Respondent No.4 herein (aged 46 years) who used to stay in Dahod, which is a tribal area/district in Gujarat.

However, the High Court in Special Criminal Application No. 6708/2021, directed the Appellant to give custody of the Corpus on 31-05-2022 to Respondent No. 4 vide Impugned Judgment and Order dated 02-05-2022. The High Court based its judgment on the view that the Paternal Grandparents are in their old age i.e. 71 years and 63 years respectively against which Respondent No. 4 is aged 46 years and has a bigger family. Also, the Appellant was a retired Government servant depending upon the pension against which Respondent No. 4 was a Government employee and therefore she will be in a better position to take care of the minor Corpus. The High Court has also further observed that Respondent No. 4 will have to provide paternal grandparents a right to meet the Corpus on regular basis, preferably twice in a month, whenever convenient to both the families.

Aggrieved and dissatisfied with the Impugned Judgment and Order dated 02-05-2022 of the High Court, the Appellant preferred an Appeal before the Apex Court. After taking into consideration the facts and circumstances of the case, the Bench noted that the grounds considered by the High Court in granting the custody of the minor Corpus to Respondent No. 4 may be relevant but not germane. The Supreme Court in this regard observed as follows:

Therefore, based on these observations and findings, the Apex Court held that the Impugned Judgment and Order dated 02-05-2022 passed by the High Court whereby the custody of the minor Corpus was granted to Respondent No. 4 rather than handing it to the Appellant-Grandfather was unsustainable. The Bench quashed the said Order dated 02-05-2022 and directed that the custody of the minor Corpus shall continue with the Appellant-Paternal Grandfather, who was directed to take care of the minor child. The Respondent No. 4 was given the visitation rights to meet the Corpus on regular basis preferably once in a month, subject to the convenience of the child, video calls on a regular basis and that during the vacation and/or holiday, the Appellant may permit the minor Corpus to visit and stay with the Respondent No.4 – the maternal aunt, subject to the wishes and convenience of the Corpus   and that it does not adversely affect the interest of the Corpus including his education and extra curriculum activities. With these directions, the Appeal was allowed.