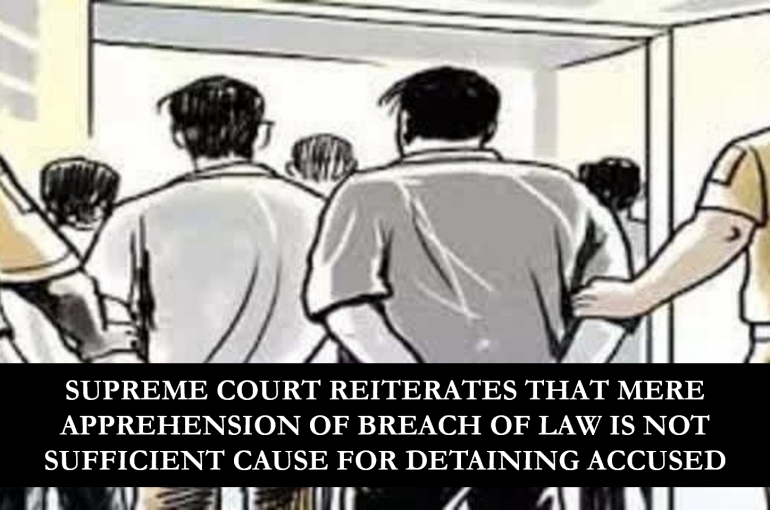 A Division Bench of the Hon’ble Supreme Court of India comprising of Justice Dr Dhananjaya Y Chandrachud and Surya Kant passed a Judgment dated 04-04-2022 in the case of Mallada K Sri Ram v. The State of Telangana & Ors [Criminal Appeal No 561 of 2022 (Arising out of SLP(Crl) No 1788 of 2022)] and held that an order for preventive detention cannot be ordered merely because a person is implicated in a criminal proceeding.

In the present case, the brother of Mallada K Sri Ram-Appellant (Detenu /Accused No. 2) was working with M/s Ixora Corporate Services (Company), Banjara Hills, Hyderabad. A Complaint dated 13-10-2020 was lodged by the Company with the SHO, Banjara Hills alleging that another employee of the Company by the name of K Mahendra (Accused No.1), who was in charge of the HR Department at the Company had opened a salary account with the Federal Bank without authorization and in conspiracy with the Detenu/Accused No.2 he collected an amount of Rs 85 Lakhs from 450 job aspirants. It was also alleged that the Accused No.1 in connivance with the Accused No.2 hatched a plan to collect money from individuals by misrepresenting that they would be given a job at the Company and collected money from aspirants for opening a bank account and supplying uniforms.

The concerned Detaining Authority passed an Order of Detention dated 19-05-2021 against the Accused No.1 under the provisions of Section 3(2) of the Telangana Prevention of Dangerous Activities of Bootleggers, Dacoits, Drug-Offenders, Goondas, Immoral Traffic Offenders, Land Grabbers, Spurious Seed Offenders, Insecticide Offenders, Fertiliser Offenders, Food Adulteration Offenders, Fake Document Offenders, Scheduled Commodities Offenders, Forest Offenders, Gaming Offenders, Sexual Offenders, Explosive Substances Offenders, Arms Offenders, Cyber Crime Offenders and White Collar or Financial Offenders Act 1986 (Act) on the ground that “The illegal activities of the detenu were of such a reach and extent, that they would certainly affect the even tempo of life and were prejudicial to the public order.”

This Order of Detention dated 19-05-2021 was challenged before the High Court for the State of Telangana (High Court) under Article 226 of the Constitution seeking a Writ of Habeas Corpus. The Division Bench of the High Court dismissed the Writ Petition vide Impugned Judgment and Order dated 25-01-2022 on the ground that “The detaining authority had sufficient material to record subjective satisfaction that the detention of the detenu was necessary to maintain public order and even tempo of life of the community.”

Assailing the Impugned Judgment and Order dated 25-01-2022, an Appeal was filed before the Hon’ble Supreme Court of India. The Bench after taking into consideration the facts of the case and the arguments advanced by the parties to the dispute, observed that the Order of Detention was passed after almost seven months after the registration of the first FIR dated 15-10-2020 and about five months after the registration of the second FIR dated 17-12-2020. The Apex Court therefore observed:

“The nature of the allegations against the detenu are grave. However, the personal liberty of an accused cannot be sacrificed on the altar of preventive detention merely because a person is implicated in a criminal proceeding. The powers of preventive detention are exceptional and even draconian. Tracing their origin to the colonial era, they have been continued with strict constitutional safeguards against abuse. Article 22 of the Constitution was specifically inserted and extensively debated in the Constituent Assembly to ensure that the exceptional powers of preventive detention do not devolve into a draconian and arbitrary exercise of state authority.”

The Apex Court also observed that in the last five years, it has quashed over five detention orders under the Act for incorrectly applying the standard for maintenance of public order and relying on stale materials while passing the orders of detention.

Thus, based on the aforesaid grounds, the Supreme Court while allowing the Appeal set aside the Impugned Judgment and Order of the High Court dated 25-01-2022 and quashed and set aside the Order of Detention dated 19-05-2021 passed by the Detaining Authority against the Accused.