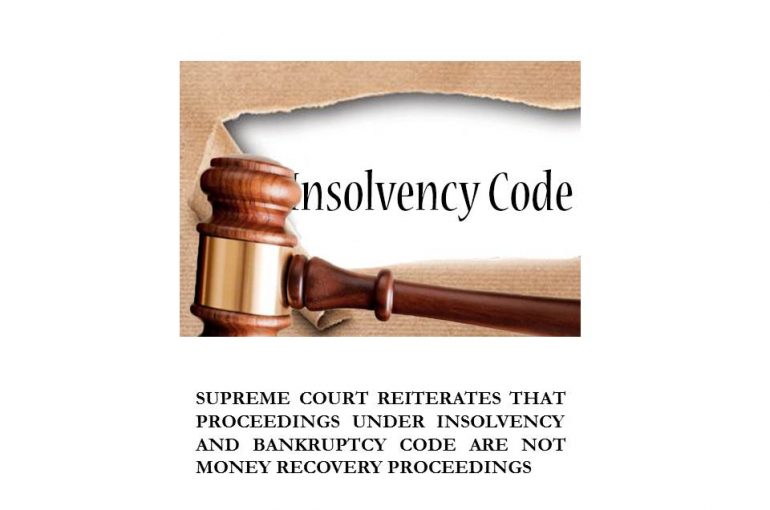 A Division Bench of the Hon’ble Supreme Court of India comprising of Justice Dinesh Maheshwari and Justice Aniruddha Bose passed a Judgment dated 25-04-2022 in the case of Invest Asset Securitisation and Reconstruction Pvt. Ltd. versus Girnar Fibres Ltd (Civil Appeal No. 3033 of 2022) and reiterated that the provisions of the Insolvency and Bankruptcy Code, 2016 (the Insolvency Code) are not to be construed as money recovery proceedings.

In the present case, the account of Girnar Fibres Ltd (Respondent) was declared as Non-Performing Asset (NPA) by the State Bank of India (SBI) on 28-02-2002 and subsequently it was declared sick by Board for Industrial and Financial Reconstruction (BIFR) on 25-04-2006 under the Sick Industrial Companies Act, 1986. Thereafter, the loan was assigned to Invest Asset Securitisation and Reconstruction Pvt. Ltd. (Appellant) by SBI on 22-09-2011. However, the reference filed by the Respondent was dismissed by BIFR on 04-05-2016.

Subsequently, the Appellant filed an Application under Section 7 of the Insolvency Code against the Respondent on 01-10-2018.

Before the National Company Law Tribunal, Chandigarh Bench, Chandigarh (NCLT) and the National Company Law Appellate Tribunal, Principal Bench, New Delhi (NCLAT) the Appellant contended that the cause of action was on 05-05-2016 which is after the dismissal of reference by BIFR and therefore, the Application was filed within the period of three years as per Article 137 of Schedule I of the Limitation Act, 1963 (Act). The contention of the Appellant was rejected by the NCLAT and it held that the reference before BIFR ended on 13-08-2015 and also the period between 25-04-2006 and 04-05-2016 cannot be excluded for the purpose of calculating the limitation period and thus on this ground the Application preferred by the Appellant was barred by limitation. Further, the NCLAT held that right to sue accrued when the default occurred way back on 28-02-2002; and that the material on record does not evidence any acknowledgement of liability in terms of Section 18 of the Act. The NCLAT vide Order dated 18-11-2021 dismissed the Appeal.

Aggrieved by the NCLAT Order dated 18-11-2021 an Appeal was filed before the Hon’ble Supreme Court of India under Section 62 of the Code. The Apex Court after perusing the facts of the case, observed that the right to sue accrued on the date of declaration of NPA i.e. 28-02-2002 but there is no evidence of any acknowledgement of liability in terms of Section 18 of the Act.

The Bench while upholding the Order dated 18-11-2021 held that “that the provisions of the Code are essentially intended to bring the Corporate Debtor to its feet and are not of money recovery proceedings as such. The intent of the Appellant had only been to invoke the provisions of the Code so as to enforce recovery against the Corporate Debtor. We find no fault in the Tribunal and the Appellate Tribunal having declined the prayer of the Appellant.”

Furthermore, the Supreme Court held that if any other proceedings have been or are taken up by the Appellant, the same shall be dealt with and proceeded on their own merits and in accordance with law.

The Appellate Tribunal while rejecting the Appellant’s Application was correct in interpreting that the time frame for filing the Application had to be in keeping with the three year period allowed by the Limitation Act, 1963. That the limitation occurred way back on 28.02.2002 and that the material on record does not evidence any acknowledgement of liability in terms of Section 18 of the Limitation Act, 1963. The Supreme Court after seeing the Appellate Tribunal’s Order was of the opinion that the Appellant was using the proceedings under the Insolvency Code as recovery proceedings rather than to bring the corporate debtor to its feet. Of late the proceedings under the Insolvency Code to arm twist the Corporate Debtor for recovery.