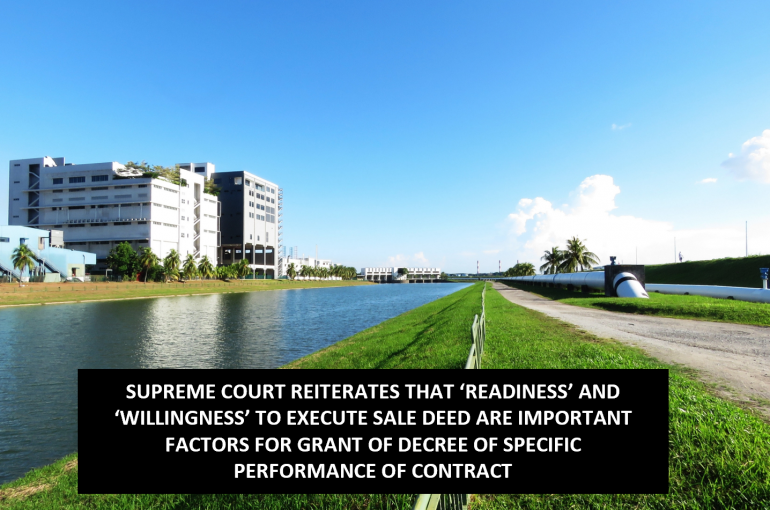 A two Judge Bench of the Supreme Court comprising of Justice Sanjiv Khanna and Justice Bela M. Trivedi passed a Judgment dated 12-10-2022 in the matter of P. Daivasigamani vs S. Sambandan Civil Appeal No. 9006 of 2011 and observed that the Respondent had complied with the requirements of Section 16(c) of the Specific Relief Act 1963 (Act) (Personal bars to relief) by making a specific pleading regarding his readiness and willingness to execute the sale deed, which is one of the important factors for grant of decree of specific performance of contract in his favour.

In the present case, the Appellant, Mr. P. Daivasigamani, the owner of the Suit Property located at Ayanambakkam, District Ambattur, entered into an Agreement to Sell dated 05-10-1989 with the Respondent, Mr. S. Sambandan in respect of the said Suit Property. On the date of execution of the Agreement, the Respondent paid Rs. 50,000.00 by way of earnest money deposit (EMD). Further, as per the terms of the Agreement, sale had to be completed within 6 months. The Respondent claims to have performed his part of the Contract inter alia (i) by requesting the Appellant to execute the sale deed (ii) by showing his readiness and willingness to perform his part of the Contract, (iii) by calling upon the Appellant vide Letter dated 17-03-1990 to execute a Power of Attorney and to conclude the sale transaction, (iv) by sending a Legal Notice dated 26-03-1990 to the Appellant which was returned with an endorsement ‘refused’, (v) by causing to be published a Public Notice in the Tamil daily “Dhina Thanthi” on 02-05-1990 and in English daily “Indian Express” on 06-05-1990, thereby informing the public not to enter into any sale transaction with the Appellant in respect of the Suit Property, etc. However, despite repeated follow ups and efforts made by the Respondent, the Appellant failed to respond or perform his part of the Contract.

Aggrieved, the Respondent filed a Suit for Specific Performance of the Agreement to Sell before the Learned Subordinate Judge, Poonamallee (Trial Court) in O.S. No. 212 of 1993. The Appellant denied receipt of Rs. 50,000.00 and further denied receipt of any correspondence from the Respondent. The Trial Court partly decreed the Suit, vide Judgment dated 28-06-2002, and held that (a) the Respondent failed to prove his readiness to execute the sale deed as he could not prove his financial capacity to pay the balance Rs. 6,00,000.00 within the stipulated timelines, hence, he is not entitled to the decree for specific performance of the Agreement, but (b) the Respondent would be entitled to recover the EMD of Rs. 50,000.00 with 12% p.a. interest from date of Agreement to date of realisation.

Aggrieved, the Respondent filed an Appeal before the Madras High Court at Madurai in Appeal Suit No. 196 of 2002, which was allowed, vide Judgment dated 15-06-2010, as the Respondent made several efforts and attempts to show his willingness to execute the sale deed and pay balance sale consideration and that the Respondent had complied with the requirements of Section 16(c) of the Specific Relief Act 1963 (Personal bars to relief), which requires the plaintiff to prove performance of, or readiness and willingness to perform the Contract. Hence, the High Court held that the O.S. No. 212 of 1993 would stand decreed in respect of the prayer for specific performance.

Aggrieved, the Appellant filed an Appeal before the Supreme Court. The Apex Court while passing the Judgment dated 12-10-2022, made the following observations:

1) That as per Article 54 of Limitation Act 1963, a suit for specific performance of contract can be filed within 3 years from date fixed for the performance, or, if no such date is fixed, then when the plaintiff has notice that the performance has been refused. In the present case, since after execution of Agreement to Sell dated 05-10-1989, the Respondent had sent several correspondences to the Appellant and caused publication of notice in newspapers until 06-05-1990, to which the Appellant did not respond and thereafter the Suit was filed on 26-03-1993, which is within the 3-year limitation period running from the date the Respondent noticed that the performance was refused by the Appellant. Thus, the Suit is not barred by limitation

2) That as per Section 16(c) of the Specific Relief Act 1963, specific performance of a contract cannot be enforced in favour of a person who fails to prove that he has performed or has always been ready and willing to perform the essential terms of the contract which are to be performed by him, other than terms of the performance of which has been prevented or waived by the defendant.

3) That the term ‘readiness’ referred to in Section 16(c) of the Act means the capacity of the plaintiff to perform the contract, which would include the financial position to pay the purchase price. Whereas, the term ‘willingness’ referred to in Section 16(c) of the Act refers to the intention of the plaintiff as a purchaser to perform his part of the contract, which can be inferred from the plaintiff’s conduct. Further, continuous readiness and willingness on the part of the Plaintiff from the date the balance consideration was payable, till the decision of the Suit, is a pre-essential condition for grant of relief of specific performance.

Thus, based on the aforesaid observations, the Supreme Court held that in the present case, the Respondent had duly complied with the requirements of Section 16 (c) of the Act by making specific pleading in respect of his readiness and willingness to execute the sale deed supported by reliable evidence. Further, that the Appellant had failed to perform his part of Contractual Obligations, though called upon by the Respondent to perform. Hence, the Appeal was dismissed and the High Court Judgment dated 12-10-2022 granting Decree for Specific Performance was upheld. Further, the Apex Court directed the Respondent to pay Rs. 1 Crore towards sale consideration in the interest of justice, over and above the amount that might have been deposited by the Respondent, in view of the steep rise in prices since 1989 to 2022. On such deposit made by Respondent, the Appellant has been directed to execute the sale deed in favor of the Respondent.