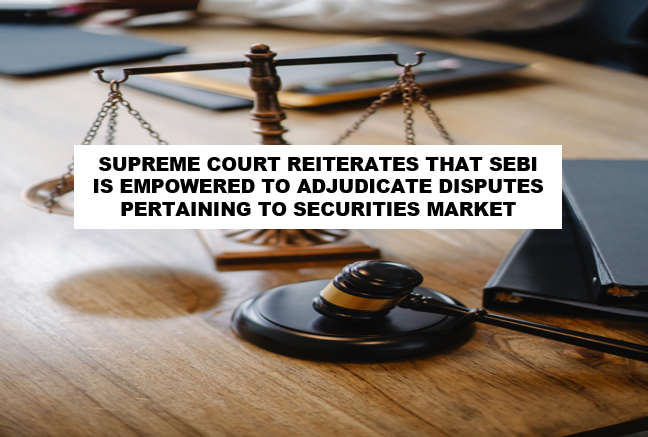 Recently, a two Judge Bench of the Hon’ble Supreme Court comprising of Justice Pamidighantam Sri Narasimha and Justice A.S. Bopanna passed a Judgment dated 04.01.2023 in the case titled IFB Agro Industries Limited v. Sicgil India limited and others, Civil Appeal No. 2030 of 2019 and reiterated that in respect of matters and disputes pertaining to securities market, the Securities and Exchange Board of India (SEBI) is empowered to adjudicate and determine violations thereof.

On 19.01.2004, the Respondent No. 1 acquired 600 Equity Shares of the Appellant, and this resulted in the aggregate shareholding of the Respondents to reach beyond 5% of the Appellant’s Paid-Up Share Capital, thereby invoking Regulation 7(1) of the Securities and Exchange Board of India (Substantial Acquisition of Shares and Takeover) Regulations, 1997 [SEBI (SAST) Regulations].  According to Regulation 7(1) of the SEBI (SAST) Regulations, when an acquirer, either by himself or with any person acting in concert with the acquirer, acquires 5% or more of the total paid-up share capital of a company, then a disclosure has to be made to the acquiree company and the stock exchange. In compliance with this Regulation, the Respondents are said to have sent an intimation to the Appellant on the very next day i.e., on 20.01.2004. The Appellant received this intimation on 22.01.2004. According to the Appellant, the disclosure required by Regulation 7(1) was not made in the format specified.

Thereafter, on 19.07.2004, the Appellant filed a Petition before the Company Law Board under Section 111A of the Companies Act, 1956 (which is now Section 59 of the Companies Act, 2013) (Rectification of register of members) praying for rectification of its register of members for deleting the name of the Respondents as the owner of shares which are over and above the 5% threshold. As of the date of filing of the Section 111A Petition, the Respondents collectively held around 8.22% of the Appellant’s Paid-Up Share Capital.

During the pendency of the Petition under Section 111A of the Companies Act, 1956, the Companies Act, 2013 came into force, and the matter stood transferred to the National Company Law Tribunal (NCLT), Kolkata Bench, in C.P.No.550/KB/2004.

It is clear that the power exercised by the Company Law Board and the powers exercised by the SEBI fall in different and distinct jurisdictional fields. Therefore, the present order shall not preclude the jurisdiction of SEBI as an adjudicating authority for deciding on the violation of SEBI Regulations as have been laid down in the present petition.”

Aggrieved the Respondents filed appeal before the National Company Law Appellate Tribunal (NCLAT), Delhi Bench in Company Appeal (AT) No. 240 of 2017.

The point of consideration before the NCLAT was ‘Whether the NCLT was empowered to pass an Judgment dated 05.07.2017 of buyback while entertaining a Petition under Section 111A of the Companies Act, 1956’. The NCLAT, by its Order dated 06.12.2018, allowed the Appeal and set aside the NCLT Judgment dated 05.07.2017. Aggrieved, the Appellant filed an Appeal before the Supreme Court of India.

The Apex Court passed Judgment dated 04.01.2023 and made the following observations:

1) In respect of the first issue, the Supreme Court relied on its earlier judgment of Ammonia Supplies Corporation (P) Ltd. v. Modern Plastic Containers Pvt. Ltd. & Ors, A.I.R. 1998 SC. 3153 where it was held that in so far as the matters of rectification are concerned, it is the Company Court alone which would have jurisdiction. If issues to be answered are not peripheral to rectification but are pertaining to title, etc. then such other issues will have to be decided by the Civil Court.

2) That the Apex Court observed that the rectificatory jurisdiction under Section 59 of the Companies Act, 2013 is summary in nature and not intended to be exercised where there are contested facts and disputed questions.

‘The principle enunciated in Ammonia’s case relating to the jurisdiction of a Tribunal with respect to the rectification of the register is well-recognized and consistently followed. Sub-section(3) of Section 59 recognizes the overarching right to hold and transfer securities with the concomitant entitlement of voting. This is a precious right, and that is the reason why the Parliament found it necessary to caution that the provision of this Section shall not restrict the right of a holder of securities, to transfer such securities. This is another feature which is indicative of the limited scope and extent of the power of rectification of the register’.

‘For the reasons stated above, we are of the opinion that the company petition under Section 111A of the 1956 Act for a declaration that the acquisition of shares by the Respondents as null and void is misconceived. The Tribunal should have directed the Appellant to seek such a declaration before the appropriate forum. The Appellate Tribunal is, therefore, justified in allowing the appeal and setting aside the order of the Tribunal’.

3) In respect of the second issue, the Supreme Court observed that transactions falling within the jurisdiction of Regulatory Bodies created under a statute must necessarily be subjected to their ex- ante (advance) scrutiny, enquiry and adjudication. It was held by the Apex Court that ‘Having considered the comprehensive role of the SEBI in regulating the securities market with respect to insider trading, we are of the opinion that the important role of the Regulator cannot be circumvented by simply asking for rectification under Section 111A of the 1956 Act. Such an approach is impermissible. When Constitutional Courts are called upon to interpret provisions affecting the exercise of powers and jurisdictions of these regulatory bodies, it is the duty of such Courts to ensure that transactions falling within the province of the regulators are necessarily subjected to their scrutiny and regulation. This will ensure that the regulatory body, charged with the duty to protect the consumers has real time control over the sector, thus, realizing the purpose of their constitution. Thus, we have, therefore, rejected the contention that the National Company Law Tribunal under Section 59 exercises a parallel jurisdiction with Securities and Exchange Board of India for addressing violations of the Regulations framed under the SEBI Act’.

Thus, based on the aforesaid reasonings and upon examining the records of the case, the Supreme Court passed a Judgment dated 04.01.2023 and reiterated that in respect of matters and disputes pertaining to securities market, SEBI is the most appropriate forum for adjudication and determination of violations thereof, etc. Thus, the Apex Court upheld the NCLAT’s Order dated 06.12.2018 that set aside the NCLT Judgment dated 05.07.2017. As a result, the Appeal filed by the Appellant was dismissed.