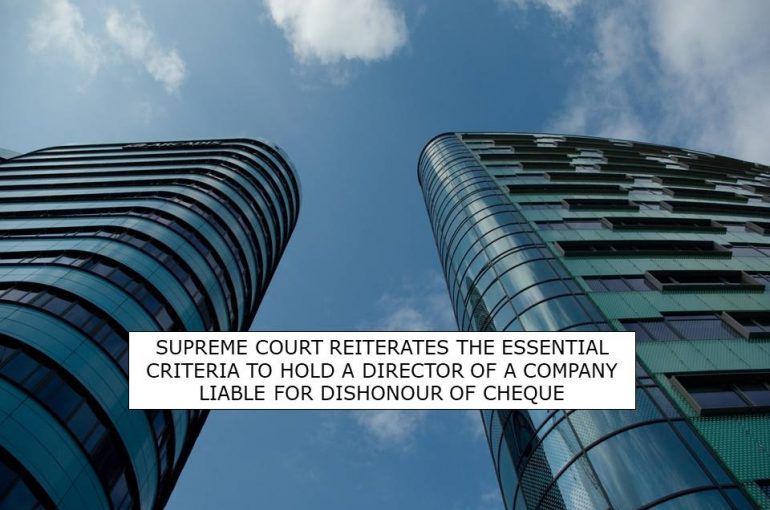 Recently, a two Judge Bench of the Supreme Court comprising of Justice Krishna Murari and Justice Bela M. Trivedi passed a Judgment dated 17-11-2022 in Pawan Kumar Goel vs. State of U.P. & Another in Criminal Appeal No. 1999 of 2022, (arising out of Special Leave Petition (Crl.) No. 1697 of 2020), and held that in a complaint filed under Section 138 of the Negotiable Instruments Act 1881 (“Act”), a specific averment is essential that at the time when the offence was committed, the person accused was in charge of the affairs of the company, in order to attract liability thereof. Failing which, such a person would not deemed to be liable under Section 141 of the said Act.

In this case, one, Pawan Kumar Goel (“Appellant”) was running a business of sale of machinery and spare parts in the name of ‘M/s Pawan Harware Store’. Whereas, one, Ravi Organics Limited, a private limited company, was engaged in the manufacture and sale of various types of chemicals. For business purposes, both the companies entered into a contract.

That one of the Directors of Ravi Organics Ltd. (hereinafter referred as “Respondent”) issued an Account Payee Cheque bearing No. 802276 for a sum of Rs. 10 Lakhs payable at Union Bank of India, Muzaffarnagar, in favor of the Appellant towards discharge of its liability for supply of materials. However, the said Cheque got dishonored on 24.12.2012. Consequently, the Appellant served a Legal Notice to the Respondent dated 01.01.2013. But the Respondent did not replied to the said Notice or pay the outstanding amount to the Appellant.

As a result, the Appellant filed a Criminal Complaint against the Respondent under Section 138 (Dishonour of Cheque for insufficiency, etc., of funds in the account) of the Negotiable Instruments Act, 1881 (“Act”). Thereafter, the Additional Chief Judicial Magistrate-II, Muzaffarnagar (hereinafter referred to as “Magistrate”) recorded the statement of the Appellant under Section 200 (Examination of complainant) of the Code of Criminal Procedure, 1973 (“Cr.P.C”) and passed an Order dated 18.03.2013 summoning the Respondent for trial in a Criminal Case No. 162 of 2013.

Dissatisfied by the Summoning Order dated 18.03.2013, the Respondent filed a Criminal Revision No. 212 of 2013 before the Ld. Additional Sessions Judge, Muzaffarnagar (“Sessions Court”). The Sessions Court, after considering the facts of the case, dismissed the said Petition, vide Order dated 02.12.2013 and held that the Cheque was issued against outstanding payments arising out of commercial transactions between the Parties.

The Apex Court passed a Judgment dated 17.11.2022 and observed as follows:

Thus, based on the aforesaid observations, the Supreme Court held that there cannot be any deemed liability of the Respondent-Director in respect of the offence committed by the Company. Hence, the Apex Court dismissed the Appeal and thereby, upheld the High Court’s Judgment and Order dated 19.11.2019 and quashed the Magistrate’s Order dated 18.03.2013 and the Sessions Court Order dated 02.12.2013.