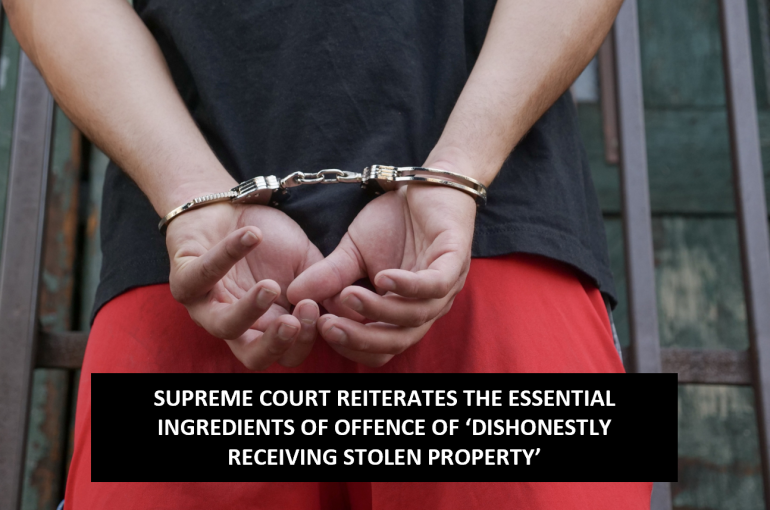 Recently, a two Judge Bench of the Supreme Court comprising of Justice K.M. Joseph and Justice Hrishikesh Roy in the matter of Shiv Kumar vs The State of Madhya Pradesh Criminal Appeal No. 1503 of 2022 passed a Judgment dated 07-09-2022 and reiterated the essential ingredients of conviction under Section 411 of the Indian Penal Code 1860 (IPC) (Dishonestly receiving stolen property).

In this case, one, Abhay Kumar Jain, the Complainant alleged that a truck operating under Excel Transport Agency had proceeded from Indore on 08-02-2003 for delivering household articles to Satna. However, the driver failed to reach the destination until 12-02-2003. On 14-02-2003, an informant found the truck standing on ‘Galla Mandi, Satna’ but the loaded goods were missing. Thereafter, the Complainant approached the Town Inspector, City Kotwali, Satna, who initially registered a First Information Report (FIR) under Section 406 of IPC (Punishment for criminal breach of trust) in Crime No. 183 / 2003, but during the police investigation, it was discovered that the truck driver was murdered by one, Sadhu Singh (Accused) with a co-Accused, Raju and that the Accused had looted the goods in the truck, which were then received by the Appellants, Shiv Kumar and Shatrughan Prasad. It is the Prosecution’s case that the Appellant dishonestly received the said goods knowing that they were stolen articles.

The Learned Fourth Additional Sessions Judge, Jabalpur (Trial Court) passed a Judgment dated 14-06-2006 in Sessions Trial No. 645 / 2003 and thereby (i) convicted the Accused, Sadhu under Sections 302 of IPC (Punishment for murder), 394 of IPC (Voluntarily causing hurt in committing robbery) read with 397 of IPC (Robbery, or dacoity, with attempt to cause death or grievous hurt) and 201 of IPC (Causing disappearance of evidence of offence, or giving false information, to screen offender), (ii) further, convicted the Appellants, Shiv Kumar and Shatrughan Prasad under Section 411 of IPC (Dishonestly receiving stolen property) and (iii) further, issued permanent arrest warrant against co-Accused, Raju, as he was absconding.

The Trial Court Judgment dated 14-06-2006 was affirmed by the High Court in Criminal Appeal No. 1261 of 2006 vide Judgment dated 12-03-2019 and bail bonds were rejected, on the ground that the Prosecution-led evidence showed that the dead body and weapons were recovered at the instance of the Accused-Sadhu and that the stolen articles were recovered from the Appellants, Shiv Kumar and Shatrughan Prasad, who were selling those stolen goods at cheaper rates.

Aggrieved by the High Court Judgment dated 12-03-2019, the Appellant, Shiv Kumar filed an Appeal before the Supreme Court, which passed a Judgment dated 07-09-2022 and made the following observations:

1) That in furtherance to recovery of stolen articles at the instance of the Appellant, the Prosecution has to further establish the essential ingredient of knowledge of the Appellant that they were stolen goods, under Section 411 IPC. The said provision is reproduced below for easy reference:

2) That Section 411 IPC has four main ingredients in order to establish the offence of “Dishonestly receiving stolen property”, namely, (i) Dishonestly i.e. intention to cause wrongful gain to one person / wrongful loss to another person, (ii) receives or retains stolen property, (iii) knowing or (iv) having reason to believe the same to be stolen property.

4) But in this case, the Prosecution failed to establish any basis for the Appellant to believe that the utensils seized from him were stolen articles. In fact, he was engaged in the business of selling household articles and utensils, so there was nothing unusual in the Appellant possessing such articles at his house.

5) In fact, the testimony of a Prosecution Witness and that of the Police regarding recovery of stolen articles at the instance of the Accused, have been contradictory. For instance, one, Nitin Jain, who claimed to have witnessed the seizure of stolen articles the Appellant, Shiv Kumar’s house, testified that the utensils were seized by Sub-Inspector G.P. Tiwari, but S.I. Tiwari clearly denied seizing such goods from the Appellant, Shiv Kumar’s house, as it did not fall within his jurisdiction. He further denied calling Nitin Jain to witness the seizures at Shiv Kumar’s house. Thus, the Apex Court held that the seizure evidence was completely unreliable.

Thus, based on the aforesaid observations, the Supreme Court held that it has not been established that the Appellant had dishonestly received stolen goods with the knowledge / belief that the goods found in his possession were stolen and hence, the conviction of the Appellant with regard to Section 411 IPC was held to be unsustainable. As a result, the Appeal was allowed and the Appellant was acquitted.