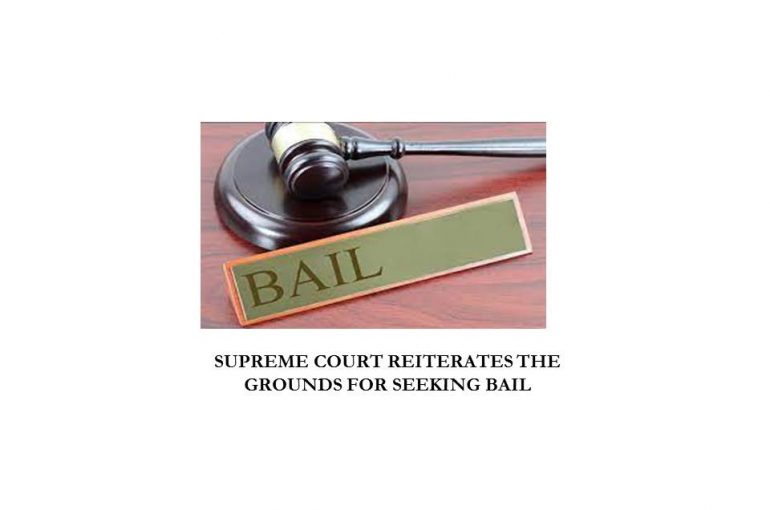 A Two Judge Bench of the Hon’ble Supreme Court of India comprising of Justices M.R. Shah and Sanjiv Khanna passed a Judgment dated 28-01-2022 in the case of Centrum Financial Services Limited Vs State of NCT of Delhi and Anr. {Criminal Appeal No.94 of 2022} and held that an Application for bail must be considered on well settled principles and not in an arbitrary manner.

In the present case, the Appellant, a Non-­banking Financial Company (NBFC) had lodged an FIR/Complaint with the Economic Offences Branch, New Delhi against M/s Sri Aranath Logistics Limited, Jayant Kumar Jain- Managing Director (Respondent No.2) and others for the Offences under Sections 409, 420, 467, 468, 471 and 120B IPC. It was alleged that via a written agreement, the Accused availed loan credit facilities to the tune of Rs. 25 Crores for a term of 180 days from the Complainant Company and the said amount was disbursed in the year 2017. However, for the purpose of repayment of loan, no stock statement was submitted and no mortgage was created as agreed between the parties.

It was alleged that instead of using the amount for the purpose mentioned in the agreement, the same was transferred to several fake/shell companies. It was further alleged that an amount of Rs. 8 Crores were diverted into the shell companies which were created by the Accused in the name of his employees and bank account was opened for transaction of those companies by using forged and fabricated documents of identities of those employees and the said amount was further siphoned off to other companies which were connected to the Accused. The Directors of the shell companies however, stated that they did not open any such account in the said name or said firm and the Accused misused their KYC Form. The Accused at the time of availing the loan gave a false image about the financial condition of the Company. It was also alleged that a sum of Rs. 15 Crores was transferred to another Company- LMJ International Ltd. and was being used for setting off against the previous liability of the said company with the Corporation Bank, Calcutta.

Aggrieved and dissatisfied with the Judgment and Order dated 14-09-2020, an Appeal was filed in the Hon’ble Supreme Court of India. After taking into consideration the facts of the case and the arguments advanced by the parties to the dispute, the Apex Court observed that the High Court erred in not considering the nature of accusation and the material found/collected   during   the course of investigation and the serious allegations of siphoning off the huge amount through various shell companies. Furthermore, the High Court failed to deal and consider the allegations and/or material collected during the course of the investigation which were specifically pointed out and mentioned in the Status Report filed by the I.O.

While placing reliance on the case of Prasanta Kumar Sarkar vs. Ashis Chatterjee and Anr., (2010) 14 SCC 496 , the Bench stated that among other circumstances, the factors to be borne in mind while considering an Application for bail are:

Further, while relying upon the case of Prahlad Singh Bhati vs. NCT of Delhi & Ors., (2001) 4 SCC 280, the Apex Court reiterated the observation made in the case that “jurisdiction to grant bail has to be exercised on the basis of well settled principles having regard to the circumstances of each case and not in an arbitrary manner.”

The Bench noted that the High Court has not at all considered the modus operandi adopted by the accused in commission of the serious offence of siphoning and/or transferring the huge sum to another company through shell companies.

Therefore, the Supreme Court while setting aside the Impugned Judgment and Order dated 14-09-2020 directed the Respondent No.2 to surrender before the concerned Court/Jail Authority.

The Hon’ble Supreme Court of India has laid down certain well settled guidelines for the grant of bail by the bail court. Of these guidelines, the Court has time and again cautioned criminal courts, that while granting a bail, the concerned court must be satisfied that an offence has been committed. Additionally, the bail granting court must also take into consideration the gravity of the accusation, punishment, risk of accused fleeing if bail is granted, likelihood of repetition of offence and probably the most important i.e. influencing the witnesses. The bail court should also consider the character, behaviour and standing of the accused person while deciding on the bail.