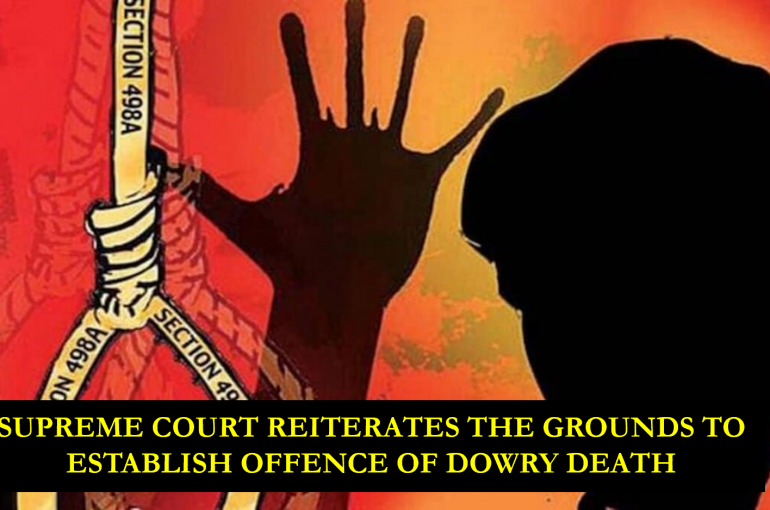 A Three Judge Bench of the Hon’ble Supreme Court comprising of Chief Justice of India N.V. Ramana, Justice A.S. Bopanna and Justice Hima Kohli passed a Judgment dated 21-04-2022 in Devender Singh & Ors. Vs The State of Uttarakhand and reiterated the essential ingredients of Section 304B of the Indian Penal Code 1860 (IPC) (Dowry death) and Section 113B of the Indian Evidence Act 1872 (Presumption as to dowry death) to establish an offence of dowry death.

Thus, a Complaint was filed by the Deceased’s brother with the local police, who investigated the case and found the Deceased’s body in River Ganga. The Police, thereafter, registered the FIR against the Appellant No. 1 (Deceased’s Husband), Appellant No. 2 (Deceased’s brother-in-law), Appellant No. 3 (Deceased’s mother-in-law) under Sections 498A (Husband or relative of husband of a woman subjecting her to cruelty), 304B (Dowry death) and 120B (Punishment of criminal conspiracy) of the Indian Penal Code 1860 (IPC), as it was a case of unnatural death taken place within six months of marriage and there were allegations of cruelty relating to demand of dowry against them.

The trial took place in Sessions Case No. 18/2008 before the District and Sessions Judge, Rudraprayag (Trial Court), where, the Appellants denied the allegations made in the FIR and produced witnesses in their favour. The Trial Court thereby acquitted all the Appellants vide Judgment dated 17-04-2010.

Aggrieved by the High Court Judgment dated 14-09-2017, the Appellants have filed an Appeal before the Supreme Court. The Apex Court passed a Judgment dated 21-04-2022 and made the following observations in this case:

1) That in order to establish an offence of dowry death under Section 304B IPC, the following essential ingredients have to be proved:

i) that soon before the death, the deceased was subjected to cruelty and harassment in connection with the demand of dowry

ii) the death of the deceased was caused by any burn or bodily injury or some other circumstance which was not normal;

iii) such a death has occurred within 7 years from the date of her marriage;

iv) that the victim was subjected to cruelty or harassment by her husband or any relative of her husband;

v) such a cruelty or harassment should be for, or in connection with the demand of dowry; and

vi) it should be established that such cruelty and harassment were made soon before her death.

2) That Section 113B of the Indian Evidence Act 1872 (Presumption as to dowry death) provides that the Court shall presume that a person has caused the dowry death if it is shown that soon before her death, he/she has subjected such woman to cruelty / harassment for, or in connection with, any demand for dowry.

3) That in this case (i) the Deceased and the Appellant No. 1 got married on 20-10-2007 and (ii) the Deceased went missing from her matrimonial house on 20-04-2008, i.e. within less than 1 year of their marriage. (iii) Further, her body was recovered within 10 days after she went missing. Hence, the ingredients of Section 304B IPC that the death was not normal and happened within 7 years of marriage stand established.

5) Furthermore, the Medical Examiner / Doctor confirmed that the death of the Deceased was not caused due to drowning as alleged by the Appellants, as there was no water in the lungs or abdomen. In fact, death had occurred due to shock and blood flow from the injuries received before the death. Thus, the natural corollary and a fair conclusion would be that the said death had occurred even before falling into the river, which would rule out any accidental fall, as sought to be claimed by the Appellants.

6) However, as the Appellant No. 2 and 3 resided in a different house which is far away from the house where Appellant No. 1 and the Deceased resided, therefore, there is no specific role with regard to the demand of dowry and nor has any specific instance of cruelty and harassment been ascribed to the appellants No.2 and 3 except for the general assertion.

Thus, based on the aforesaid observations, the Supreme Court held that the Appellant No. 1 in this case has failed to rebut the presumption drawn against him under Section 113B Indian Evidence Act read with Section 304B IPC. Therefore, the Apex Court upheld the High Court Judgment dated 14-09-2017 to the extent that the Appellant No. 1 is held guilty for making dowry demands and causing harassment to the Deceased which culminated into her death and hence, directed him to surrender himself and serve the remaining sentence. The High Court Judgment dated 14-09-2017 has been modified to the extent that the Appellant No. 2 and 3 have been ordered to be released on bail.