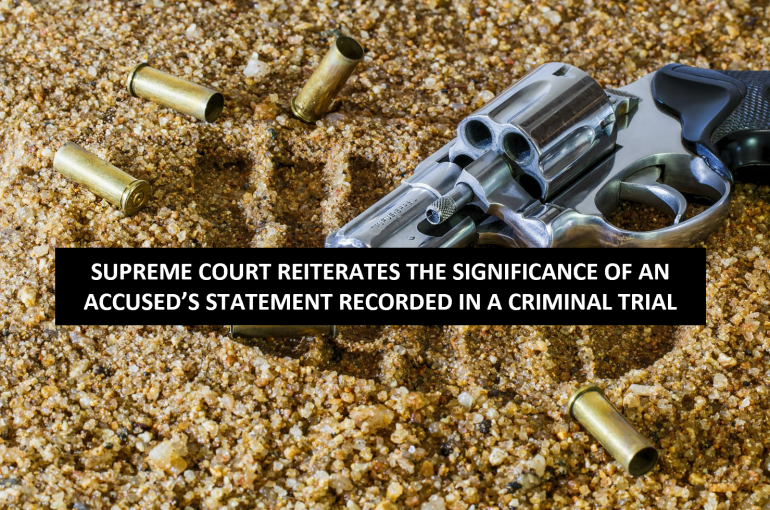 A Three Judge Bench of the Supreme Court comprising of Chief Justice of India, N.V. Ramana, Justice Krishna Murari and Justice Hima Kohli in Judgment dated 04-08-2022 passed in the matter of Jai Prakash Tiwari vs State of Madhya Pradesh Criminal Appeal No. 704 of 2018 reiterated the significance of an accused’s statement recorded under Section 313 of the Code of Criminal Procedure 1973 (CrPC) in a criminal trial.

The First Additional Sessions Judge, Sidhi (Trial Court) perused the evidence and examination of witnesses and thereafter, convicted the Appellant in Sessions Trial No. 119 of 2003 vide Judgment dated 18-08-2005 under Section 307 of the Indian Penal Code 1860 (IPC) (Attempt to murder), Section 34 IPC (Acts done by several persons in furtherance of common intention) and Sections 25 (1B) (a) and 27 (1) of the Arms Act 1959 for carrying firearm without license.

Being aggrieved, the Appellant filed an Appeal before the Supreme Court. The Apex Court passed a Judgment dated 04-08-2022 and made the following observations in this case:

1) That the evidence on record clearly establishes that the Prosecution Witnesses i.e. the Complainant’s neighbours had not seen Accused-Appellant firing the shot at the Complainant.

2) Further, there are contradictions in the testimony of the Complainant and his mother:

i) The Complainant deposed that his mother came out after hearing the gunshot,

ii) Whereas, his mother deposed in her chief examination that she followed the Complainant when he went outside, but, in her cross-examination, she deposed that she went outside after hearing the gunshot but saw the incident from their verandah.

iii) Further, it could not be proved that the Complainant’s mother had known the Accused-Appellant or the co-Accused or was well acquainted with them, in order to show that she could recognize them in a fleeting moment while they were speeding away on their bike at night. She also failed to provide any distinct features about the Accused persons. Hence, the statement of the Complainant’s mother cannot be considered with full confidence.

3) That there was no recovery of bike on which the Accused persons had allegedly fled from the spot. Moreover, the Complainant had also given a vague description of the bike without mentioning the license plate number or the color of the bike or any other distinguishing features of the bike. Thus, there is no linking factor between the said vehicle and the alleged incident.

4) Further, in respect of the pistol recovered from the scene of occurrence, the Police had not recovered any pellet, empty cartridge or gunpowder remains from the said spot. The Prosecution had failed to produce a ballistic report showing any connection between the seized pistol and the alleged incident.

5) Furthermore, the Accused-Appellant in his statement recorded under Section 313 CrPC (Power to examine the accused) stated as follows:

ii) That the Accused-Appellant was in his village on that day as his mother was not well. The said defense has been corroborated by two defense witnesses.

iii) That the Complainant’s father, sister and brother were all part of the Police Department.

iv) That the Complainant had earlier also filed a complaint against him in which he was acquitted.

6) That Section 313 CrPC confers a valuable right upon the Accused to establish his innocence and to provide him/her with a reasonable opportunity to explain the adverse circumstances which have emerged against him during the trial. Such a right is a constitutional right to a fair trial under Article 21 of the Constitution of India.

7) That the Trial Court has recorded the statement of the Accused-Appellant under Section 313 CrPC is a very causal and cursory manner, without specifically questioning the Accused as to his defense. The examination of an accused under Section 313 CrPC cannot be treated as a mere procedural formality. This procedure is based on the fundamental principle of audi alteram partem, e. fair hearing to both parties and thus, imposes an obligation on the Court to question the Accused fairly with care and caution. The Trial Court in this case has not considered the defense statement, while passing an order of conviction against him. The High Court has also without independently analysing the defense statements and witnesses upheld the conviction.

Thus, based on the aforesaid observations, the Supreme Court held that (a) in the absence of evidence corroborating the Complainant’s statements and (b) no connection establishing recovery of bike and pistol with the alleged incident and (c) the plausible version of the defense statement under Section 313 CrPC, the case against the Accused-Appellant cannot be sustained. As a result, the Appeal was allowed, thereby setting aside the conviction and the sentence passed by the Trial Court vide Judgment dated 18-08-2005 and upheld by the High Court vide Judgment dated 26-05-2017.