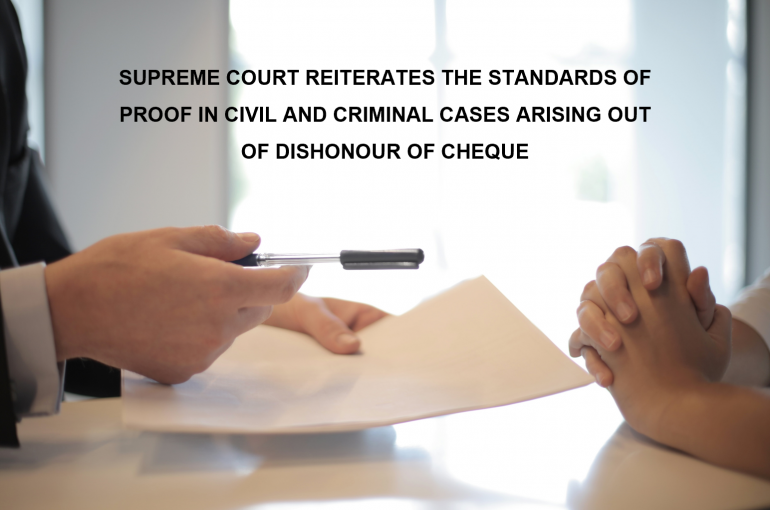 Recently, a two Judge Bench of the Hon’ble Supreme Court comprising of Justice B.R. Gavassi and Justice M.M. Sundresh passed a Judgment dated 18.01.2023 in Rajaram s/o Sriramulu Naidu (since deceased) through l.rs vs. Mr. Maruthachalam (since deceased) through l.rs., Criminal Appeal No.1978 of 2013 and Civil Appeal No. 10500 of 2013, and reiterated that the adjudication in civil matters is based on the preponderance of probabilities, whereas, adjudication in criminal cases is based on the principle that the accused is presumed to be innocent until the prosecution proves the guilt of the accused beyond reasonable doubt.

In 1992, the Appellant­ Rajaram’s wife subscribed to a five-year chit­fund with one Maruthachalam, the Respondent. Upon the Respondent’s persuasion that, in order to be a successful bidder, a security by way of a blank cheque must be submitted, the Appellant submitted two signed blank cheques on behalf of his Wife and the cheques were drawn on the account of M/s Brinda Engineering, the sole proprietorship concern of the Appellant, maintained with the Bank.

In 1995, the Appellant’s wife subscribed to yet another five­year chit­fund with the Respondent. In 1997, the bank account on which the said cheques were drawn was closed due to non­operation.

Similarly, the second chit matured in 1999 and despite repeated requests by the Appellant and his Wife seeking release of subscription amount to the tune of Rs. 6,00,000/- for both the chits, the Respondent did not pay back the money.

Pursuant to such dismissal of Complaint Cases by the Ld. Trial Court:

REASONING AND ANALYSIS OF THE SUPREME COURT

Aggrieved by the aforementioned Judgements of the Madras High Court arising from both Civil and Criminal matters, the Appellant filed Civil and Criminal Appeals before the Supreme Court, which passed a Judgment dated 18.01.2023 and observed as follows:

(1) That the Apex Court relied on its earlier judgment, Baslingappa vs. Mudibasappa (2019) 5 SCC 418, wherein it was held that once the execution of cheque is admitted, Section 139 of the Negotiable Instruments Act 1881 (I. Act) (Presumption in favour of holder) mandates a presumption that the cheque was for the discharge of any debt or other liability. It has however been held that the presumption under Section 139 is a rebuttable presumption and the onus is on the accused to raise the probable defense. The standard of proof for rebutting the presumption is that of preponderance of probabilities. It has further been held that to rebut the presumption, it is open for the accused to rely on evidence led by him or the accused can also rely on the materials submitted by the complainant in order to raise a probable defense. It has been held that inference of preponderance of probabilities can be drawn not only from the materials brought on record by the parties but also by reference to the circumstances upon which they rely.

(2) That “The standard of proof for rebutting the presumption is that of preponderance of probabilities. Applying this principle, the learned Trial Court had found that the accused had rebutted the presumption on the basis of the evidence of the defense witnesses and attending circumstances. The scope of interference in an appeal against acquittal is limited. Unless the High Court found that the appreciation of the evidence is perverse, it could not have interfered with the finding of acquittal recorded by the learned Trial Court”.

(5) Thus, in terms of standard of proof in Civil Cases, the High Court rightly came to the conclusion, on the basis of the evidence, relying on the preponderance of probabilities, that the Respondent had the financial ability to lend money to the Appellant and righty allowed the Civil Suit for Recovery against the Appellant.

(6) However, in terms of standard of proof in the Criminal Cases, the Respondent could not prove the Cheque Dishonour Cases against the Appellant beyond reasonable doubt.