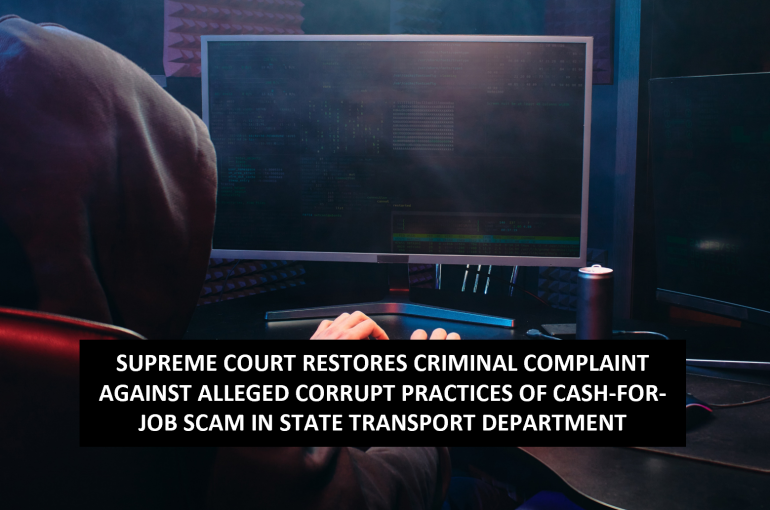 A Two Judge Bench of the Supreme Court comprising of Justice S. Abdul Nazeer and Justice V. Ramasubramanian in P. Dharamraj vs Shanmugam and Others Criminal Appeal No. 1514 of 2022 passed a Judgment dated 08-09-2022 and made observations regarding quashing of criminal proceedings in anti-corruption criminal complaint cases and thereby, restored the criminal proceedings before the Trial Court.

In this case, one, K. Arulmani (Complainant), working in the Technical Wing of the Factory of Metropolitan Transport Corporation (MTC), Tamil Nadu, filed a Complaint with the Police against (i) Senthil Balaji, the then Transport Minister (Accused No. 1), (ii) Asok Kumar, the younger brother of Senthil Balaji (Accused No. 2), (iii) Shanmugam, the Personal Assistant to Senthil Balaji (Accused No. 3), and (iv) Raj Kumar, one of the close aides of Senthil Balaji (Accused No. 4), for allegedly taking Rs. 40,00,000/- from the Complainant’s acquaintances in exchange of promise to give jobs of Conductor and Driver in the Transport Department. When the Accused did not fulfil the said promise, the Complainant sought for refund of the money paid to them. But when they failed to return the money, the Complainant filed a Complaint with the Police, which was registered as First Information Report (FIR) in Crime No. 344 of 2018 on 13-08-2018 under Sections 405 (Criminal breach of trust), 420 (Cheating and dishonestly inducing delivery of property) and 506 (1) (Punishment for criminal intimidation) of the Indian Penal Code 1860 (IPC).

After registering the FIR, the Police filed a Final Report dated 12-04-2019 under Section 173 (2) (i) of the Code of Criminal Procedure 1973 (CrPC) (Report of police officer on completion of investigation) against the four Accused before the Special Court for Trial of Cases related to Members of Parliament and Members of Legislative Assembly of Tamil Nadu (Trial Court) in CC No. 25 of 2021.

The Accused No. 3 meanwhile filed a Criminal Original Petition bearing Criminal O.P. No. 13374 of 2021 before the Madras High Court under Section 482 of CrPC (Saving of inherent power of High Court) seeking quashing of Criminal Complaint bearing CC No. 25 of 2021.

Hence, the High Court vide Order dated 30-07-2021 quashed the Criminal Complaint bearing CC No. 25 of 2021 as the Parties had resorted to out of court settlement and as the High Court in earlier cases held that in case of non-compoundable offences, complaint could be quashed. (Compounding of offence implies that in certain less serious offences, if the accused pays an agreed sum to the victim, the accused can be acquitted by the court.)

Thereafter, one, Anti-Corruption Movement Organisation moved a Miscellaneous Petition before the High Court seeking recall of the said High Court dated 30-07-2021 on the ground that the Criminal Complaint had involved allegations of corruption and abuse of official position and hence, the Chargesheet could not have been quashed based on the Compromise between the Parties. But the said Miscellaneous Petition was rejected by the High Court, vide Order dated 14-03-2022.

Furthermore, one, P. Dharamraj, who had participated in the job selection process at the Transport Department but was not selected, also challenged the aforesaid High Court Order dated 31-07-2021 and filed an SLP before the Apex Court contending that he could have got selected if the cash-for-job scam would not have happened in the said Department.

The Supreme Court while allowing the said SLPs, passed a Judgment dated 08-09-2022 and made the following observations on three main issues, namely, (i) the locus standi of the Appellants, (ii) the effect of Compromise in anti-corruption cases and (iii) non-inclusion of offences under Prevention of Corruption Act 1988 (P.C. Act) in the Chargesheet:

1) Observations about locus standi of the Appellants:

i) That as per the Investigating Officer, persons who claim to have paid money but have not received the appointment orders were not the only victims, but also those people like the Appellant who were more meritorious but did not get selected, on account of cash-for-job scam and who became victims of the alleged corrupt practices prevalent in the Department.

ii) That the public service rendered by such non-deserving candidates, who get appointed to Government posts, would adversely affect the public, who are the recipients of such public service and who ultimately become victims of such corrupt practices.

iii) That Section 2 (wa) of CrPC “victim” means a person who has suffered any loss or injury caused by reason of the act or omission for which the accused person has been charged and the expression “victim” includes his or her guardian or legal heir.

iv) Further, as per Proviso to Section 372 of CrPC, victims have a right of appeal. The said provision is reproduced below for easy reference:

No appeal shall lie from any judgment or order of a Criminal Court except as provided for by this Code by any other law for the time being in force:

Provided that the victim shall have a right to prefer an appeal against any order passed by the Court acquitting the accused or convicting for a lesser offence or imposing inadequate compensation, and such appeal shall lie to the Court to which an appeal ordinarily lies against the order of conviction of such Court.

v) Hence, based on the aforesaid principles of law, the Apex Court held that the Appellant, who is a ‘victim’ who could not get selected to the Government post on account of the alleged corrupt practice, had locus standi to file the SLP.

vi) In fact, the de facto Complainant working in the Government Department should not have, in the first instance, been party to such cash-for-job transactions and then file Affidavit of Compromise between Parties and then claim before the Supreme Court that the Appellant did not have locus standi to file SLP. In this regard, the Apex Court observed that “We leave it at that in the hope that the employer and the State would take notice of his conduct.”

2) Observations about effect of Compromise in anti-corruption cases and about non-inclusion of offences under Prevention of Corruption Act 1988 in the Chargesheet:

(i) That the FIR and Final Investigation Report did not include any offence under the P.C. Act, despite clear reference in the Complaint, about payment of money for procuring employment in the Public Transport Corporation.

(ii) That the Final Report included offences under Sections 406, 409, 420 and 506 (1) IPC, out of which Section 409 IPC (Criminal breach of trust by public, servant. or by banker, merchant or agent) is a non-compoundable offence, as per Section 320 CrPC (Compounding of offences).

(iii) That the High Court has to judiciously apply its mind while exercising jurisdiction under Section 482 CrPC and Article 226 of the Constitution, in case of quashing of criminal proceedings on the basis of settlement reached between the parties, when the offences are capable of having an impact not only on the complainant and the accused, but also on others.

(iv) In this case, as per the Final Report, there were two categories of corrupt practices prevalent in the Transport Department, namely, (a) some persons who paid money to the officials and who got appointment orders and (b) some persons who also paid money to the officials, but did not get appointed. If the second category of persons are allowed to settle their dispute by taking refund of money paid, then it would imply that the Court is approving the employment of first category of people.

(v) Hence, the Supreme Court held that the High Court ought not to have quashed the Criminal Proceedings on the basis of compromise.

(vi) Further, corruption by a public servant is an offence against the State and the society as well. Thus, the State ought to have undertaken a comprehensive investigation into the said scam rather than leaving out offences against corruption in the FIR and the Final Report.

Thus, based on the aforesaid observations, the Apex Court set aside the High Court Order dated 31-07-2021 and thereby, allowed the Appeal. The Supreme Court further directed for restoration of the Criminal Complaint before the Trial Court and for filing of further report by the Investigating Officer under Section 173 (8) of CrPC (Report of police officer on completion of investigation).