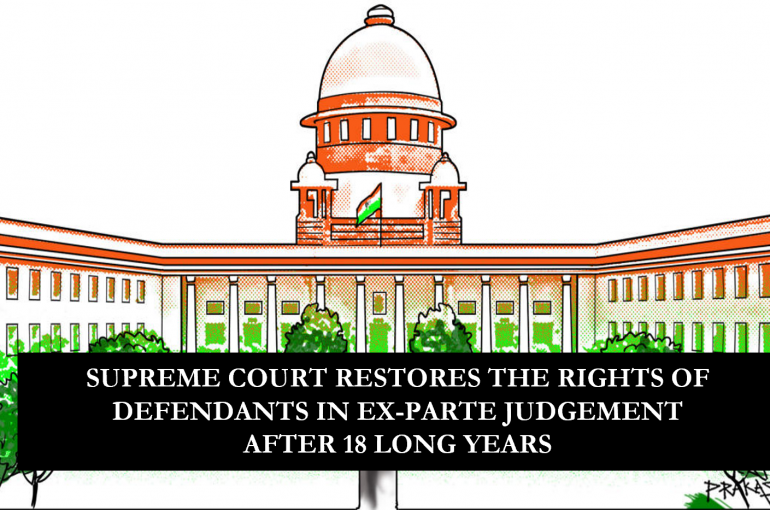 In the present case, Jersey Developers (P) Ltd (Appellant No.1- original defendant) availed a term loan of Rs. 9,93,812/- from  Canara Bank (Respondent- original Plaintiff) on 25.10.1995. That on 02.06.2000 the Respondent had issued a Legal Notice to the Appellant demanding payment towards the said loan. In year 2003, the Respondent instituted a Suit for Recovery in OS No. 3749 of 2003 against the Appellant before the City Civil Court, Chennai for recovery of amount. The summons and notice of the said Suit were sent to the Chennai address of the Appellant, knowing they reside in U.S from last 40 years. The summons and notices returned ‘unclaimed’. The Learned City Civil Court vide Order dated 12.02.2004 passed an Ex-Parte Decree.

Thereafter the Respondent approached the Debt Recovery Tribunal for issuance of Recovery Certificate in respect of order passed by the court. A Notice dated 07.06.2013 was issued by the Debts Recovery Tribunal calling upon the Appellants to pay a sum of Rs.47,21,320.53/-. That on 29.03.2014, when the Appellant No.2 visited India from the U.S, he came to know about the Recovery Certificate and Ex-Parte Decree for the first time.

Feeling aggrieved by the Ex-Parte Decree, the Appellants filed an Application dated 11.04.2014 under Order 9 Rule 13 of the Code of Civil Procedure 1908 (CPC) before the Trial Court for setting aside the Ex-Parte Decree dated 12.02.2004. The Trial Court vide Order dated 17.03.2015 dismissed the aforesaid Application. Thereafter the Appellants approached the Hon’ble High Court of Judicature at Madras in C.R.P (NPD) No. 4427/2015 against the said Order of Trial Court. The High Court in the Impugned Order dismissed the Revision Petition.

The Apex Court, after hearing the contentions raised by the respective parties, observed that, since the Appellant has already deposited the entire decretal amount  (50% in the High Court and 50% in the Supreme Court), it shows their bonafides and the deposited amount has secured the Respondent. The Appellants are given one more opportunity to defend the Suit instituted against them to meets the ends of justice.

Thus the Impugned Order passed by the High Court and Trial Court dated 17.03.2015 passed in I.A No. 6778 of 2014 and OS No. 3749 of 2003 dismissing the Application for Setting Aside the Ex-Parte Decree is quashed and the original Suit is ordered to be restored on the file of the Trial Court.

This case has been handled by our Firm and deals with setting aside of an Ex-Parte Decree passed against the Appellants 18 years ago. The Respondents claimed that service was complete while the Appellants were able to show that they have never been served. The Supreme Court after hearing the Appellant demanded that the Appellant shall deposit 50% of the decreed amount to show their bonafides. The Appellants have finally been given an opportunity to defend their case and the same is a welcome step forward. The Respondent Bank had demanded from the Appellant  Rs. 6,00,000/-, 20 years ago. The Appellant was interested in an out of court settlement but the Bank did not agree. When they went to Court the Bank issued summons to an incorrect address and got a decree which made the principal with interest to Rs. 47,21,320.53/- .This case only goes to show how unfair the banking system can be in case a borrower fails to pay the dues. Many a times a borrower in default may have a genuine reason and in this case the borrower was ready to settle but the Bank was rigid. At the Supreme Court during the final arguments, the Respondent Bank offered to settle the matter out of court. So much for justice delayed.