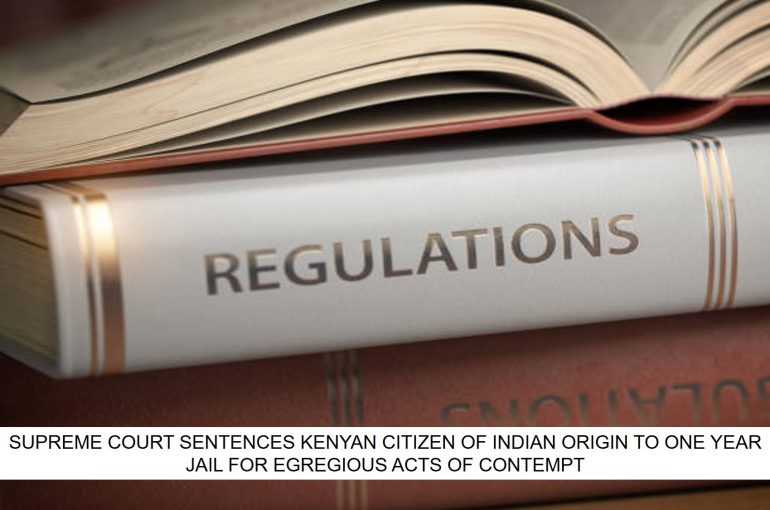 Recently, a two Judge Bench of the Supreme Court comprising of the Chief Justice of India UU Lalit and Justice PS Narasimha judgement dated 04.11.2022 in RE: PERRY KANSAGRA in SUO-MOTU CONTEMPT PETITION (CIVIL) NO. 3 OF 2021, has sentenced a Kenyan Citizen of Indian Origin, Perry Kansangra (Hereinafter referred to as “Contemnor/Father”), to six months simple imprisonment finding him guilty with a clear intention of committing egregious acts of contempt.

The Contemnor/Father married Smriti, an Indian citizen, on 29.07.2007 in New Delhi. Initially, the couple stayed in Nairobi, Kenya but Smriti returned to India in 2009, and the couple was blessed with a son – Aditya, on 02.12.2009 in New Delhi. Except for a brief period, when the couple went to Kenya in 2012, Aditya always stayed with Smriti in Delhi. A Guardianship Petition was filed by the Contemnor/Father before the Saket District Court for declaration of Legal Guardianship. After the contest, the Petition came to be allowed by Order dated 12.01.2018. Smriti challenged the said Order before the High Court of Delhi in which the Court affirmed the decision of the District Court granting custody of Aditya to the Contemnor/Father.

The Petitioner Mother Smriti challenged the decision of the High Court before the Supreme Court in which the Apex Court held that the Contemnor/Father was entitled to the custody of the child. A condition was also imposed that he should obtain a “Mirror Order” from the corresponding Kenyan Court within two weeks to take the child to Kenya.

Later, Smriti filed an Application in the Supreme Court stating that the Contemnor/Father got custody by allegedly giving a forged or wrong Mirror Order from the Kenyan High Court. It was also alleged that he not only refused to obey the directions granting visitation or meeting rights to the mother but also moved the Kenyan Court for declaration of invalidity of Indian jurisdiction.

Taking note of this, the Supreme Court took suo moto cognizance and recalled the Order of granting custody after finding that the Contemnor/Father had played fraud on the Court and had approached it with “unclean hands” by suppressing material facts.

The Apex Court under Article 129 of the Constitution of India (Court to punish for contempt of self) held that Contemnor/Father is guilty of having committed criminal contempt of Court apart from the contempt for violating express undertakings given to the Courts.

By Judgment dated 03.11.2022, the Apex Court considered the issue of sentence and held that

“These acts constitute willful disobedience of the judgment, direction and Order of this Court coupled with willful breach of the undertaking given by the Court which constitute civil contempt. The Contemnor has falsely represented before the foreign jurisdiction that Indian Courts have not sought the consent of Aditya and that the decision of the Supreme Court of India is unenforceable. These acts clearly lower the authority of this Court. We have also indicated that the Contemnor/Father has interfered with the due course of judicial proceedings and obstructed the administration of justice which is a clear case of criminal contempt.

The Apex Court further directed the Contemnor/Father be:

Thus, based on the aforesaid observations, the Apex Court held that it is within the constitutional power of this Court to consider the contumacious acts of a Contemnor/Father and to punish him for the same. It is in exercise of such a power, unrestricted by the Contempt of Court Act that the Apex Court sentenced a Kenyan Citizen of Indian Origin to 1-year Jail and fine of Rs. 25,00,000/-.