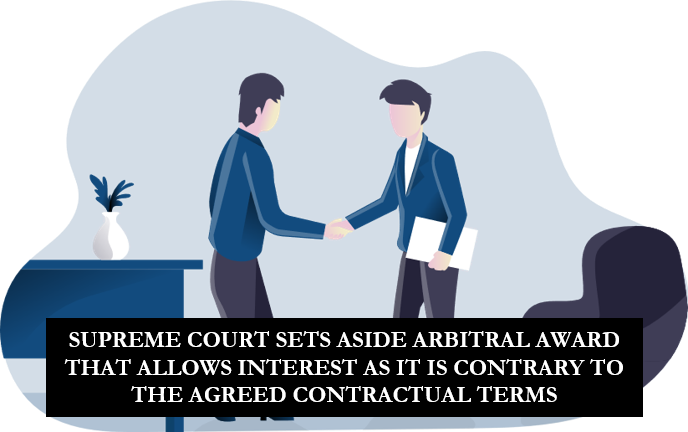 A Two-Judge Bench of the #SupremeCourt comprising of J. MR Shah and J. BV Nagarathna has in a matter of Union of India vs Manraj Enterprises Civil Appeal No. 6592 of 2021, passed a #Judgment dated 18-11-2021 and decided upon the issue of whether an #arbitrator can allow #interest on #award amount, if the parties had decided otherwise in their #contract.

In this case, disputes arose between the Appellant- Indian Railways and the Respondent-Contractor in respect of a contract (Contract) around 1997. The Parties resorted to arbitration for resolution of the disputes. The Arbitrator passed an Award dated 17-01-2011 in favor of the Respondent (Award). The Arbitrator awarded an amount of Rs. 78,81,553.08 along with interest pendente lite and future interest at the rate of 12% and 18% respectively on the entire Awarded Amount except for the earnest money deposit and the security deposit.

The Appellant filed an Application under Section 34 of the Arbitration and Conciliation Act 1996 (Arbitration Act) before the Delhi High Court, to challenge the Award on the ground that although the Contract entered into by the Parties had a bar against payment of interest, the Arbitrator awarded interest on the Award Amount. The Single Bench of the High Court dismissed the said Application and upheld the Arbitrator’s Award. On an Appeal to the Division Bench, the High Court dismissed the Appeal, vide Order dated 12-04-2021.

Aggrieved, the Appellant filed an Appeal before the Supreme Court. The Apex Court made the following observations:

(2) No interest will be payable upon the earnest money or the security deposit or amounts payable to the Contractor under the Contract, but Government Securities deposited in terms of Sub-clause (1) of this Clause will be repayable with interest accrued thereon.

31. Form and contents of arbitral award.—

Hence, the Supreme Court held that as the Parties had agreed in the Contract that no interest shall be payable, the Arbitrator cannot go beyond the terms of the Contract and award interest. Thus, the High Court Orders and the Award allowing interest pendente lite or future interest on the amounts due and payable to the Respondent under the Contract, have been set aside.

The above reported Judgment is a warning bell to all contractors who enter into Government contracts without reading the fine print carefully. Most contractors are so happy to be awarded contracts that they are ready to sign any terms without really considering the consequences. The Arbitration started around 1997 and the Award was given on 17-01-2011. It has taken around 24 years for the case to reach closure. To the dismay of the Contractor, despite having waited for about 24 years to get the payments, he has not got any interest. It goes without saying that had his money been in a bank, it would have doubled in this period.