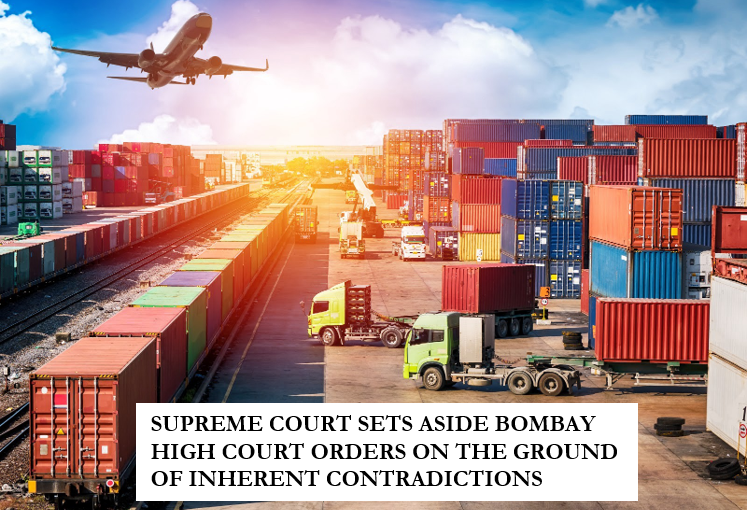 A Three-Judge Bench of the #SupremeCourt has in a recent case of Union of India vs M/S. Raj Grow Impex LLP & Ors. passed a #Judgment dated 17-06-2021 and held that the #orders of the #BombayHighCourt are #unjustified for being contradictory to the orders of the #Commissioner of #Customs (Appeals).

In this case, the Director General of Foreign Trade (DGFT) issued notifications under the Foreign Trade (Development and Regulation) Act, 1992 (the Act) in the previous years (Notifications), restricting the import of certain beans, peas and pulses (Goods). The Respondents, M/s. Raj Grow Impex LLP and M/s. Harihar Collections, had imported the said Goods and thereafter, the Adjudicating Authority at Customs, Mumbai ordered for confiscation of the Goods in view of the said Notifications, vide Order dated 28-08-2020. As a result, the Respondents-Importers had to pay fine, customs duty and penalty to redeem the Goods. However, DGFT objected to the release of the said Goods as they were restricted items. Hence, the Customs Authority did not release the Goods.

Aggrieved, the Respondents-Importers herein approached the Bombay High Court seeking issue of Writ of Mandamus for clearance of the Goods. The Bombay High Court passed a Common Order dated 15-10-2020 and issued directions to the Customs Authority to release the Goods as the Respondents-Importers had complied with the terms and conditions of the Customs Authority and were incurring warehousing expenditure; hence, any further withholding of Goods would not be justified. However, the matter was left to be decided by the Commissioner (Appeals).

Meanwhile, the Commissioner of Customs on its own motion called for and examined the Order dated 28-08-2020 of the Adjudicating Authority at Customs, Mumbai under Section 129D(2) in the Customs Act, 1962 and pointed out the alleged deficiencies in the said Order and directed the said Authority to file an appeal before the Commissioner (Appeals) for determination of such points. The Commissioner (Appeals) allowed the Appeal on 24-12-2020 and ordered for absolute confiscation of the Goods and enhanced the amount of penalty.

Aggrieved, the Union of India and the Customs Authorities filed an Appeal before the Supreme Court and challenged the Orders dated 15-10-2020 and 05-01-2021 passed by the Bombay High Court.

The Apex Court stayed the operation of the Bombay High Court Orders and made the following observations in this case:

2) That the High Court failed to consider the reason behind issue of DGFT Notifications which restricted the import of such Goods. The intent behind such Notifications is to safeguard the agricultural economy of India. The large-scale imports were adversely impacting the interests of the farmers due to fall in prices in local market. However, the High Court ignored such overriding factors and rather, considered factors such as warehousing expenditure incurred by the Respondents-Importers, etc.

3) That the High Court omitted to consider that the Respondents-Importer had an alternate remedy to approach the Customs, Excise and Service Tax Appellate Tribunal (CESTAT) against the Customs Adjudicating Authority’s Order dated 28-08-2020 for confiscation of the Goods. Hence, the High Court was wrong in entertaining the Writ Petitions, when alternate remedy of regular statutory appeal to CESTAT was available.

Based on aforesaid observations, the Supreme Court held that as the Bombay High Court while ordering for release of Goods, ignored relevant considerations, therefore, the said Orders dated 15-10-2020 and 05-01-2021 are unsustainable and liable to be set aside. Further, the Apex Court allowed absolute confiscation of the Goods but with a relaxation of allowing re-export, upon payment of fine, etc.