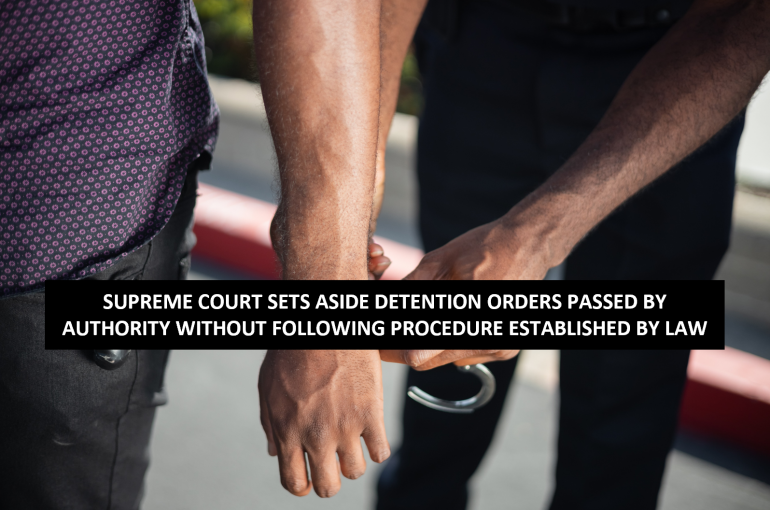 Recently, a two Judge Bench of the Supreme Court comprising of Justice Ajay Rastogi and Justice C.T. Ravikumar passed a Judgment dated 19-10-2022 in the matter of The State of Manipur and Others vs Buyamayum Abdul Hanan @ Anand & Anr and other connected matters, and set aside arbitrary Detention Orders passed by the Petitioner-Authority without following the procedure established by law under Article 22 (5) of the Constitution of India (Protection against arrest and detention in certain cases).

In this case, Writ Petition (Crl.) 15 of 2021 and Writ Petition (Crl.) 20 of 2021 were filed by the Respondents herein before the High Court of Manipur at Imphal thereby challenging the Orders of Detention dated 17-05-2021 and the grounds of detention thereof issued by the Special Secretary (Home), Government of Manipur, whereby the Respondents were subjected to Preventive Detention under the Prevention of Illicit Trafficking in Narcotic Drugs and Psychotropic Substances Act, 1988 (1988 Act). The main contention of the Respondents herein was that they were not supplied the legible copies of the relevant documents as the text was blurred and not readable and as such they could not give effective representation before the Detaining Authority. Hence, the mandatory requirements for passing Detention Orders were not complied with by the Authority in terms of Article 22 (5) of the Constitution. The Article 22 (5) is reproduced below for easy reference:

When any person is detained in pursuance of an order made under any law providing for preventive detention, the authority making the order shall, as soon as may be, communicate to such person the grounds on which the order has been made and shall afford him the earliest opportunity of making a representation against the order

i) That the Supreme Court had earlier in a case of Manjit Singh Grewal @ Gogi Vs. Union of India and others [1990 (Supp.) SCC 59, 1990 SCC (Cri) 608], observed that the supply of legible copies of the documents was a procedural safeguard provided by the Constitution to a detenu and that as the copies of the documents supplied were illegible, the Apex Court had set aside the detention order in that case.

ii) In certain other cases, the Supreme Court further observed that supply of legible copies of such documents to the detenu is a part of his / her right under Article 22(5) of the Constitution, so that he / she can make an effective representation against the detention order before the concerned Authority.

Accordingly, the High Court held that it was the duty of the Detaining Authority, as per the Constitutional mandate, to ensure that the right of the Detenu is safeguarded by making available the necessary legible documents to the Detenu. Failing which, the Order of Detention passed in respect of the Detenu based on such faulty exercise cannot be sustained. Thus, the High Court allowed the Writ Petitions and set aside the Detention Orders vide Judgment dated 16-09-2021 and 28-10-2021.

1) That Article 22 (5) of the Constitution confers two rights on the detenu, i.e. (i) right to be informed about the grounds for making detention order and (ii) to be afforded earliest opportunity to make a representation before the concerned Authority against the detention order.

2) That for the purpose of making effective representation, the detenu must have all relevant information about the grounds of his detention and relevant documents supplied to him by the Detaining Authority. Failing which, it would amount to infringement of Fundamental Right guaranteed to such detenu under Article 22 (5).

3) Thus, as per Article 22 (5), supply of legible copies of documents relied upon by Detaining Authority to the detenu is a sine qua non or a pre-essential condition for making an effective representation before the Authority. In the present case, the Authority had failed to comply with such mandatory requirement, as a result of which, the Fundamental Right of the Detenu to make effective representation before the Detaining Authority has been infringed. Further, the Petitioner-Authority deprived the Respondent of his right of personal liberty and individual freedom by passing such arbitrary Detention Orders without following the procedure established by law.

Thus, the Supreme Court held that as the Petitioner-Authority had failed to supply to the Respondent-Detenu legible copies of documents relied upon for passing the Detention Orders, they have deprived the Respondent-Detenu his right to make effective representation before the Petitioner. Hence, the Apex Court held that the Orders of Detention passed by the Petitioner based on such faulty exercise have been rightly set aside by the High Court. Thus, the Supreme Court upheld the High Court Judgments dated 16-09-2021 and 28-10-2021 and thereby, dismissed the Appeals filed by the Petitioner-Authority.