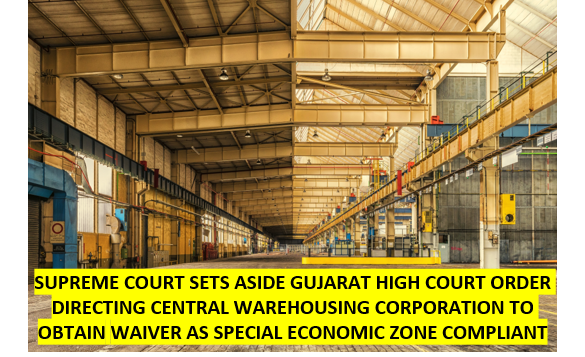 In the present case titled as Central Warehousing Corporation v. Adani Ports Special Economic Zone Limited and Others in (SLP(C) Nos. 15548-49 of 2021), a two Judge Bench of the Supreme Court comprising of Justice BR Gavai and Justice CT Ravikumar, set aside a conditional Order of the Gujarat High Court at Ahmedabad (High Court) dated 30.06.2021. The said Order allowed Adani Ports Special Economic Zone Ltd (APSEZL) to acquire 34 acres of land adjacent to Mundra Port in Gujarat. The Order was subject to the State-run Central Warehousing Corporation’s (CWC) ability to obtain approval or waiver for its warehousing facility as a Special Economic Zone (SEZ)-compliant unit within three months.

In the year 2000-2001, the Gujarat Maritime Board (GMB) executed a Lease and Possession Agreement granting lease of an undeveloped land within New Mundra Port Limits (later changed to APSEZL) to Gujarat Adani Port Limited (GAPL) for a period of 30 years. GAPL, by an agreement dated 02.06.2004, sub-leased a plot of land admeasuring about 34 acres to the Central Warehousing Corporation (Appellant) for the purpose of setting up a warehouse, for a term up to 16.02.2031.

Being aggrieved by the aforesaid Communication, the Appellant filed a first Writ Petition being SCA No. 184 of 2017 before the High Court alleging that the aforesaid decision was causing obstruction in free movement of vehicles and transportation of food grains etc. to be stored at the warehousing facility. The Learned Single Judge of the High Court did not grant an interim relief while issuing notice, therefore, the Appellant filed Letters Patent Appeal (LPA) No. 22 of 2017.  In the said LPA, vide Order dated 11.01.2017, the Division Bench of the High Court granted an ad-interim relief and directed the Respondents to allow the Appellant to carry out the required activities at the warehouse.  The Respondents were also directed to issue gate passes for transportation till the next date of hearing.

Meanwhile, the Ministry of C & I considered the aforementioned pending request of the Appellant and thereby rejected the said request to delineate/denotify the said land.  The Appellant, being aggrieved by the said decision, filed the Second Writ Petition being SCA No. 5816 of 2017 before the High Court.

Thereafter, a proposal was submitted by APSEZL on 09.03.2019 (Proposal) and the salient features of the said Proposal reads as follows:

All the three conditions of the aforementioned Proposal were accepted by the Board of Directors of CWC, but in the meantime, APSEZL unilaterally retracted from the 3rd condition.

“(i) That Appellant CWC is allowed three months’ time from today either:

(a) to seek and obtain approval as a SEZ compliant Unit from the competent authority under the SEZ Act in respect of its Warehouse facility situated in 34 acres of land in question within SEZ Area developed by Respondent, or,

(b) APSEZL; to obtain a waiver of the conditions to comply with the provisions of SEZ Act as a SEZ Unit and the Competent Authority while considering any such application of CWC, if any filed by it, will provide opportunity of hearing to both the parties;

(ii) If CWC fails to get such approval as a SEZ compliant Unit or waiver as aforesaid within aforesaid period of three months, the Respondent APSEZL may acquire the land of the same size of approximately 34 Acres outside SEZ area as already identified an d selected by CWC, for the construction of a Warehouse facility for the Appellant CWC of approximately same size as agreed between the parties under Proposal Nos.1 and 2 in the letter dated 9.3.2019 and affirmed by subsequent correspondence and Board Resolution dated 12.6.2019 of CWC and the Affidavits of the parties filed in this Court. Such acquisition of land and construction of warehouse by the Respondent APSEZL may be completed within a period of one year after the expiry of aforesaid period of three months

(iii) Once the completed construction on the land outside the SEZ Area, already identified and selected by CWC, is offered to the Appellant vacate CWC, the Appellant the existing premises CWC shall of the warehousing facility on the said 34 acres of land situated within SEZ area within three months of such communication of the Respondent APSEZL and the Appellant CWC shall be bound to hand over the peaceful and vacant possession of existing warehousing facility and land of 34 Acres in question to the Respondent APSEZL within such period of three months of the communication of the Respondent APSEZL that new warehousing facility on the land situated outside the SEZ area is ready to be taken in possession and occupied by CWC.

(iv) If the Appellant CWC fails to hand over the vacant and peaceful possession to the Respondent, even thereafter, the Respondent APSEZL shall be free to approach this Court or the concerned Development Commissioner or the learned Single Judge or other authorities of the State for appropriate execution of these directions of this Court.

The Supreme Court vide Judgment dated 13.10.2022, remitted the matter back to the Single Judge of the High Court for consideration afresh. The Apex Court further directed the matter to be decided as expeditiously as possible and preferably within a period of six months from the date of the Judgment.

The Division Bench made the following observations: