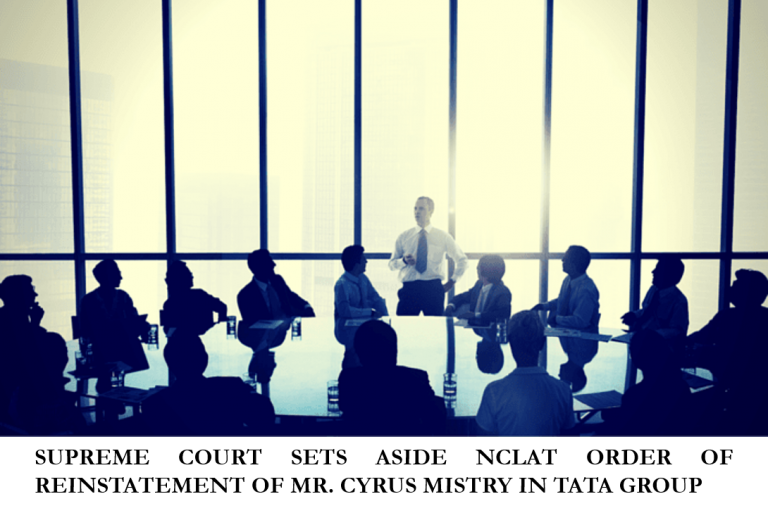 A Three Judge Bench of the #SupremeCourt has in a recent case of Tata Consultancy Services Limited vs Cyrus Investments Pvt. Ltd. and Others Civil Appeal Nos. 440441 of 2020 passed a Judgment dated 26-03-2021, where the Apex Court heard and decided upon a batch of Appeals filed by the TATA Group (TATA Group) including Mr. Ratan N. Tata, TATA Sons Private Limited (#TATASons) and Cross Appeal by Shapoorji Pallonji Group including Cyrus Investments Private Limited (#PallonjiGroup), against the Final Order dated 18-12-2019 passed by the National Company Law Appellate Tribunal (NCLAT).

The NCLAT held the Meeting of the Board of Directors of TATA Sons of 24-10-2016 illegal in so far as it relates to the removal of Mr. #CyrusPallonjiMistry and directed TATA Group to restore him to the position of Executive Chairman of TATA Sons and as Director of the TATA Companies for the rest of his tenure.

1) That the NCLAT restrained the TATA Group from removing Mr. Cyrus Pallonji Mistry as Director, on the ground of oppression and mismanagement under Sections 241 and 242 of the Companies Act 2013 and further ordered his reinstatement as the Executive Chairman of TATA Sons and as Directors of TATA Companies for the rest of the tenure. However, Pallonji Group had never sought for reinstatement of Mr. Mistry, as he had no such intention to take charge as Executive Chairman and Director of TATA Companies.

2) That the effect of the NCLAT Order was that the companies from which Mr. Mistry had resigned or were contemplating his removal, they would have to reinstate him as Director in those companies as well.

Thus, the Supreme Court held that the NCLAT granting relief of reinstatement is without any foundation in pleadings, without any prayer in this regard and without any basis in law under Sections 241 and 242 of the Companies Act 2013. Therefore, the Apex Court allowed the Appeals filed by the TATA Group.