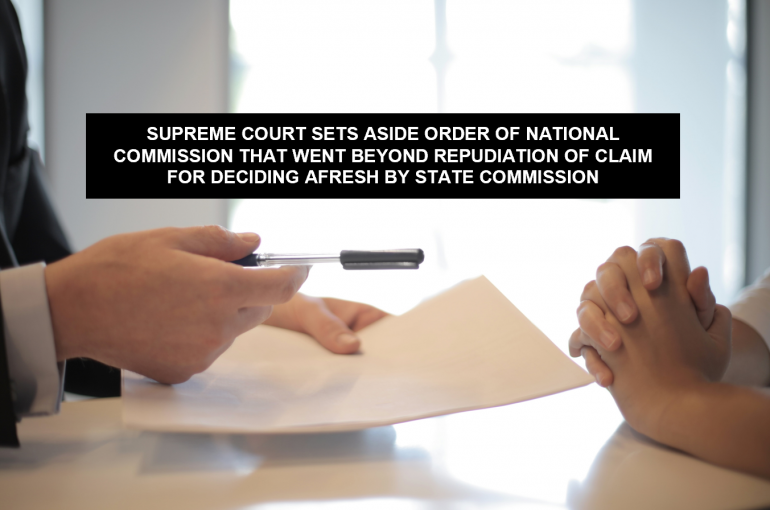 In the present case titled as JSK Industries Pvt. Ltd. v. Oriental Insurance Company Limited SLP (Civil) No. 21524 of 2018, a two Judge Bench of the Supreme Court comprising of Justice Aniruddha Bose and Justice Dinesh Maheshwari, vide Judgment dated 18.10.2022 allowed the Appeal filed against the Order of the National Consumer Disputes Redressal Commission (National Commission) setting aside the decisions of the National Commission and State Consumer Disputes Redressal Forum (State Commission) and remanded the matter to the State Commission for considering afresh the claim of the JSK Industries (Appellant).

In the present case, the Appellants are traders and manufacturers of aluminium products and had purchased a Policy from the Oriental Insurance Company Limited (Respondent). The Policy initially covered a sum of Rs. 200 crores and under the heading “Risk Details”, it was indicated “from anywhere in India to anywhere in India”. There was subsequent addition of terms and a raising of insurance coverage as well. The endorsement schedule dated 25.11.2009 described the Policy as “On the Sales Turnover basis” and it became effective on 25.11.2009. The next endorsement was made on 08.04.2010, by which sum insured was raised by a further Rs. 200 Crores. The sum insured was raised by a further Rs.100 Crores in the year 2010. The Appellants claim to have purchased eight containers of aluminium ingots, by a High Seas Sale Agreement dated 22.06.2010. These containers had arrived at Jawaharlal Nehru Port Trust (JNPT) and from there, they were sent to the Appellants’ factory unit at Silvassa by a transporter by road. The Appellants’ case is that out of the eight containers, one was stolen and the incident of theft took place on 02.07.2010 and the value of stolen goods was Rs.34,99,081/-.

The Appellants then lodged their claim with the Respondent on 18.03.2011 on the ground that their insurance coverage was enhanced to Rs.400 Crores and it was explained by them that the aforesaid coverage of Rs.400 crores was not exhausted. But their claim was repudiated by the latter on the ground that there insufficient balance to cover the declaration and/or loss. The Appellants then approached the State Commission against the Respondent.

The State Commission vide Order dated 27.07.2012 rejected the claim of the Appellants, taking into account the fact that their Policy was subsequently converted into Sales Turnover basis to cover sale transaction up to Rs.400 crores in a given time and though their Policy coverage had been enhanced, the same did not cover the loss on which their claim was raised. It stated that on the date of occurrence i.e. cause of action (02/07/2010) insurance cover under the Policy though earlier increased to the sum assured of Rs. 400 Crores but such contingency was not covered as admittedly, the sales transactions that  took place were not covered due to lack, of balance of sales transaction under the Insurance Policy.

The Appellants then filed an Appeal against the Order of the State Commission before the National Commission, which vide Order dated observed as follows:

Thus, based on the abovementioned observations, the National Commission dismissed the Appeal vide Order dated 15.01.2018.

Aggrieved by the aforementioned Impugned Order of the National Commission, the Appellant filed an Appeal before the Apex Court.

The Supreme Court vide Judgment dated 18.10.2022, observed that “we find that the National Commission mainly rejected the Appeal of the Appellant on the ground that they had converted “from anywhere in India to anywhere in India” Policy into the sales turnover Policy covering transportation of goods only from two locations specified in the endorsement made on 25.11.2009. The repudiation was on the ground of exhaustion of insurance coverage and the State Commission also determined the issue primarily on that ground. Both the National Commission and the State Commission had referred to, in their respective decisions, the nature of the Policy but the State Commission did not come to a specific finding as to whether the goods otherwise remained insured from the JNPT Port to the Appellants’ factory.

Thus, following the ratio of the decision of the Coordinate Bench in the case of Saurashtra Chemicals Ltd. v. National Insurance Co. Ltd. [(2019) 19 SCC 70], the National Commission ought not to have gone beyond the grounds of repudiation and into the nature of coverage, which according to the National Commission had effectively changed from “anywhere in India to anywhere in India” to a sales turnover Policy, limiting the Policy coverage of the subject goods from the points of departure at the two locations at Silvassa.

Under these circumstances, we set aside the decisions of the National Commission as also of that State Commission and remand the matter to the State Commission for taking a decision afresh on the claim of the Appellants on the grounds which formed the basis of repudiation and determine as to whether at the material point of time there was sufficient balance to cover the claim on account of declaration made as regards loss suffered by the Appellants.”

Thus, the Apex Court remanded the matter to the State Commission for taking a decision afresh on the claim of the Appellants and to determine as to whether at the material point of time there was sufficient balance to cover the claim on account of declaration made as regards loss suffered by the Appellants.