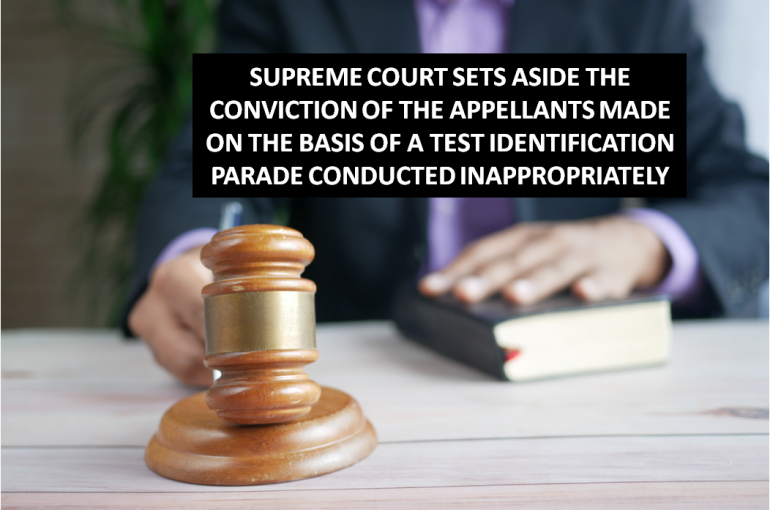 A Two Judge Bench of the Supreme Court presided by Justice B.R. Gavai and Justice Pamidighantam Sri Narasimha passed a Judgment dated 11.11.2022 in the case of Gireesan Nair & Ors. Etc Versus State Of Kerala, Criminal Appeal Nos. 1864-1865 of 2010 and decided upon the issue whether conviction can be made solely on the basis of a Test Identification Parade (TIP).

The Accused- Appellants were allegedly involved in a violent protest against the Kerala Government decision to delink pre-degree courses from colleges and to start plus ­two courses at the school level. The protesters had become violent and caused damage to as many as 81 buses belonging to the Kerala State Road Transport Corporation (KSRTC) leading to the death of a KSRTC bus conductor. Pursuant to the lodging of a First Information Report (FIR), in order to carry out the investigation, the Chief Judicial Magistrate (CJM) gave consent to the Investigating Officer (IO) to conduct TIP and accordingly the process of TIP was concluded. However, the Appellants objected to the manner in which the TIP was conducted and the events preceding it, inter alia– (i) showing the Accused to the witnesses from the IO’s cabin prior to the commencement of the TIP process; (ii) photographing and video graphing the Accused while they were in police custody; (iii) securing the presence of the witnesses in the Ld. CJM’s Court while the Accused were being produced for extension of their remand; and (iv) making the Accused wear the same dress straight from their arrest till the date of the TIP.

The Ld. CJM’s Court proceeded to convict the Accused persons vide Order dated 15.02.2006 under Sections 143 (Punishment for being a member of unlawful assembly), 147 (Punishment for rioting), 148 (Rioting, armed with deadly weapon) of Indian Penal Code (IPC) and 3(2)(e) of The Prevention of Damage to Public Property Act, 1984 (Mischief causing damage to public property) along with Section 149 (Every member of unlawful assembly guilty of offence committed in prosecution of common object) of the IPC and sentenced the Appellants to four years of imprisonment. The High Court vide Order dated 14.01.2010 upheld the conviction and the sentence awarded by the Ld. CJM. Aggrieved, the Accused persons filed an Appeal before the Supreme Court.

The Appellants questioned i) the credibility of the eyewitnesses who participated in the TIP to identify the Accused; (ii) the delay in conducting the TIP, (iii) the legality of the TIP and (iv) presence of the IO during the TIP process.

The Hon’ble Supreme Court discussed the law regarding the Test Identification Parade (TIP) and observed that “The object of conducting a TIP is threefold. First, to enable the witnesses to satisfy themselves that the accused whom they suspect is really the one who was seen by them in connection with the crime. Second, to satisfy the investigating authorities that the suspect is the real person whom the witnesses had seen in connection with the said occurrence. Third, to test the witnesses’ memory based on first impression and enable the prosecution to decide whether all or any of them could be cited as eyewitnesses to the crime”.

The Apex Court further observed that both the TIPs were conducted at the stage of investigation by the Police. It assures that investigation is proceeding in the right direction. It is a rule of prudence which is required to be followed in cases where the accused is not known to the witness or the complainant (C. Muniappan and Ors. v. State of Tamil Nadu, (2010) 9 SCC 567 ). However, it is not a substantive piece of evidence. Instead, it is used to corroborate the evidence given by witnesses before a court of law at the time of trial. Therefore, TIPs, even if conducted, cannot be considered in all the cases as trustworthy evidence on which the conviction of an accused can be sustained.

The Hon’ble Supreme Court further observed that it is a matter of great importance both for the investigating agency and for the accused for the proper administration of justice that a TIP is held without avoidable and unreasonable delay after the arrest of the accused. This becomes necessary to eliminate the possibility of the accused being shown to the witnesses before the test identification parade. This is a very common plea of the accused, and therefore, the prosecution has to be cautious to ensure that there is no scope for making such an allegation. If, however, circumstances are beyond control and there is some delay, it cannot be said to be fatal to the prosecution. But reasons should be given as to why there was a delay.

The Hon’ble Apex Court further held that: “It   is   significant   to   maintain   a   healthy   ratio   between suspects and non­suspects during a TIP. If rules to that effect are provided in Prison Manuals or if an appropriate authority has issued guidelines regarding the ratio to be maintained, then such rules/guidelines shall be followed. The officer conducting the TIP is under a compelling obligation to mandatorily maintain the prescribed ratio. While conducting a TIP, it is a sine qua non that the non­suspects should be of the same age­group and should also have similar physical features (size, weight, color, beard, scars, marks, bodily injuries etc.) to that of the suspects. The concerned officer overseeing the TIP should also record such physical features before commencing the TIP proceeding. This gives credibility to the TIP and ensures that the TIP is not just an empty formality (Rajesh Govind Jagesha v. State of Maharashtra, (1999) 8 SCC 428).

The Supreme Court also held that the burden of proof is not on the defense but on the prosecution to prove that a TIP was conducted in a fair manner and that all necessary measures and precautions were taken before conducting the TIP. Hence, the Apex Court while re-appreciating the evidence on record, observed that in the above case there was no other evidence apart from the evidence of the eye-witnesses, who in the present case, had the opportunity of seeing the Appellants before the TIP was conducted. Thus, the Hon’ble Supreme Court held that, “We are of the opinion that the conduct of the TIP, coupled with the hovering presence of the police during the conduct of the TIP vitiated the entire process”. Hence, as the TIP was held to be vitiated, the conviction was held to be unsustainable.