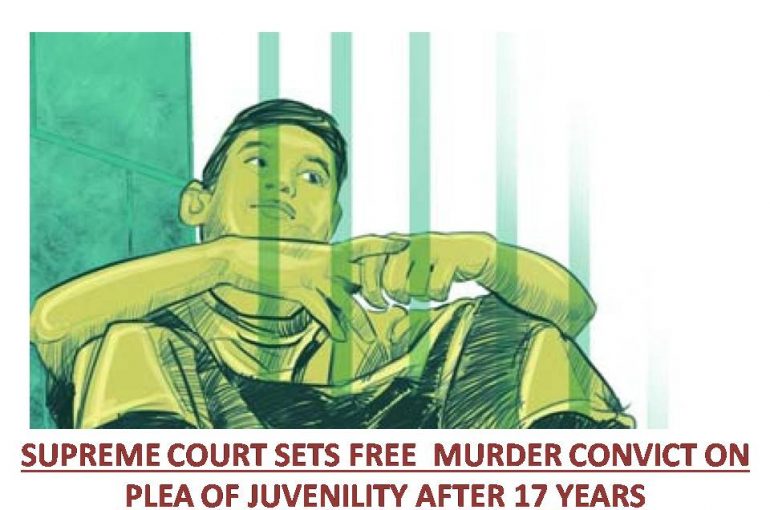 In a recent Judgement dated 13.04.2022 by Justices AM Khanwilkar and Abhay S. Oka in ‘Sanjay Patel and Anr. Vs  State of Uttar Pradesh’ in Miscellaneous Application No. 1997 of 2021 passed by the Hon’ble Supreme Court of India, the court held that it would be unjust to send the Applicant back to Juvenile Justice Board after he had already served 17 years jail sentence.

Feeling aggrieved and dissatisfied by the Order of Sessions Court, the Applicant preferred an Appeal before the Hon’ble High Court of Allahabad. The High Court dismissed the aforesaid appeal.

The Applicant preferred a Special Leave Petition (SLP) (Criminal) No. 5604 and 5605 of 2009 before the Hon’ble Supreme Court of India against the Order of High Court. The Apex Court vide Order and Judgment dated 13.08.2009 dismissed the aforesaid SLP.

Thereafter the Applicant filed a Miscellaneous Application No. 1997 of 2021, before the Apex Court, contending that his date of birth is 16.05.1986, which in turn means at the time of commencement of the offence he was a juvenile. The Applicant submitted a number of documents including High School results declared by Board of High School to support his contentions.

As per Section 7A of Juvenile Justice (Care and Protection) Act 2000, the accused was entitled to raise the claim of juvenility before any court, even after the final disposal of the case. The most stringent action which can be taken against the applicant is of sending the him to a special home for a period of  3 years as per Section 15 of Juvenile Justice Act.

A Certificate dated 01.08.2021 was issued by the Senior Superintendent of the concerned jail at Lucknow, which states that as per records till 01.08.2021, the Applicant has already undergone the sentence of 17 years and 03 days.

The Apex Court while allowing the Application and after taking into account all the oral and documentary evidence came to a conclusion that, it would be unjust and unfair to send the Applicant back to Juvenile Justice Board. The Court further added that he shall be forthwith set at liberty provided he is not required to be detained under any other order of the competent Court.