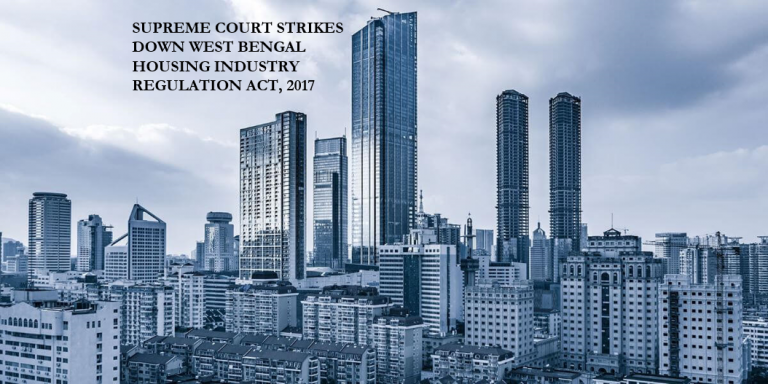 A Two Judge Bench of the #SupremeCourt has in a recent case of <strong><em>Forum for People’s Collective Efforts (FPCE) &amp; Anr. vs The State of West Bengal &amp; Anr. Writ Petition (C) No. 116 of 2019</em></strong> passed a #Judgment dated 04-05-2021 and #struck down the #constitutionalvalidity of the West Bengal Housing Industry Regulation Act, 2017 (#<strong>WBHIRA</strong>) for being inconsistent with the provisions of the Real Estate (Regulation and Development) Act, 2016 (#<strong>RERA</strong>).

In this case, the constitutional validity of WB-HIRA was challenged by Forum for People’s Collective Efforts (<strong>FPCE</strong>), the Petitioner, before the Apex Court under Article 32 of the Constitution of India 1950, on the ground that WB-HIRA is contrary or inconsistent with the Central Law, i.e. RERA and that WB-HIRA has not received any Presidential Assent.

<strong>1)</strong> That RERA was introduced to bring uniformity amongst various laws existing on real estate and to ensure that there is no inconsistency between Central and State Legislations pertaining to real estate.

<strong>2)</strong> However, the Legislation on real estate in the State of West Bengal, i.e. WB-HIRA, contained several provisions that were inconsistent with RERA:

<strong>i)</strong> That WB-HIRA provides for the setting up of a regulatory authority for the housing industry, i.e. Housing Industry Regulatory Authority, which is distinct from the RERA Authority, appointed by the appropriate government under Section 21 of RERA Act.

<strong>ii)</strong> That RERA Act applies only to those real estate projects that are located within a defined planning area.

However, there is no pre-defined limits under WB-HIRA, as it applies to all real estate projects in the State of West Bengal.

<strong>iii)</strong> The Union Minister for Housing has recently directed the State/Union Territories for issuance of necessary orders/circulars under RERA to invoke <em>Force Majeure </em>clause and extend the completion period of real estate projects, so that homebuyers are not deprived of possession of completed flat/house, due to COVID-19 Pandemic.

However, the stakeholders (homebuyers and promoters/developer) falling under WB-HIRA got deprived of the aforesaid benefit, as they were not covered under RERA.

<strong>iv)</strong> The power of adjudication of compensation cases under RERA falls within the jurisdiction of a judicial officer appointed by the RERA Authority.

However, the power of adjudication of compensation cases under WB-HIRA is with the Regulatory Authority thereunder, and not a judicial officer.

<strong>4)</strong> Further, under <strong>Article 254 (2) of the Constitution,</strong> a State Legislation must receive Presidential Assent if it is made on any of the matters enumerated in the Concurrent List and if it is repugnant to any of the provisions of an earlier law made by the Parliament on the said matter. But in this case, WB-HIRA has not received Presidential Assent.

<strong>5)</strong> That the Supreme Court held that <em>once Parliament has enacted a law, it is not open to the State Legislature to legislate on the same subject matter and, as in this case, by enacting provisions which are bodily lifted from and verbatim the same as the statutory provisions enacted by Parliament</em>.

Thus, based on the aforesaid observations, the Apex Court held that the statutory overlaps between WB-HIRA and RERA cannot be overlooked on the grounds that a number of provisions under WB-HIRA are directly in conflict with the Central Law, i.e. RERA and that the State of West Bengal has not obtained Presidential Assent before enacting WB-HIRA. Hence, the Supreme Court struck down the constitutional validity of WB-HIRA.

Further, the Apex Court held that striking down of WB-HIRA will not affect the registrations, sanctions and permissions previously granted under WB-HIRA, prior to the date of this Judgment, i.e. prior to 04-05-2021.