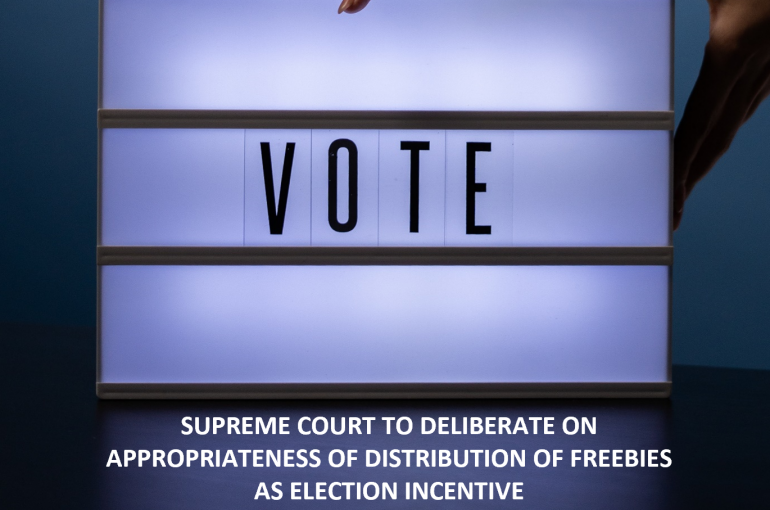 The case titled as Ashwini Kumar Upadhyay vs Union of India and Another, Writ Petition (Civil) No. 43 of 2022 was disposed of on 26-08-2022 by a Special Bench of three Judges of the Supreme Court. The Petitioner had submitted that the distribution or promise of such freebies is nothing but a ploy to attract the vote bank. He further contended that such practices go against the spirit of fair play between political parties. Possibly the most important part that was urged in the Petition was that it is ultimately the tax payer’s hard-earned money that is being misused for political gain by political candidates and parties who want to retain power.

In the present matter, there were other connected Writ Petitions that were also tagged and the subject matter of this batch of Writ Petitions was two-fold. The first batch related to pre-election freebies and the second, grant of benefits by Government which cannot be deemed to be a welfare measure but a mere trick to capture vote banks.

The State represented by Solicitor General of India stated that the Union of India has a limited role and there was a suggestion that the Court may constitute an Expert Commission that could look into such matters. The Election Commission of India was of the view that Courts have limited scope to interfere in the affairs of political parties and candidates with reference to the election manifesto and promises of freebies. There was a batch of Intervention Applications that were filed with these Petitions, mostly from political parties, that challenged the maintainability of these Petitions. It was their contention that such issues are matters related to policy or fiscal decisions of the State and are clearly outside the scope of Court’s jurisdiction. They further submitted that a Court cannot curtail the rights of political parties in their election propaganda, manifesto, etc.

The Supreme Court after considering the issues raised by this batch of Petitions as well as the response by Union of India, the Election Commission and political parties, held that there is no doubt that in a democracy the true power lies with the electorate. The Court further held that the Court generally stays its hand when it comes to confronting matters relating to policy or fiscal matters, as the same falls outside the ambit of the Court.

Initially, the Apex Court was of the opinion that an expert body should be constituted to report the matter. However, it finally decided that as the issues were far reaching and there were certain preliminary issues that need to be looked into and the matter should be decided by a three Judge Bench of the Supreme Court constituted to hear the matter.

The issues that the Apex Court formulated based on the Petitions were as follows:

a) What is the scope of judicial intervention with respect to the reliefs sought in the present batch of petitions?

b) Whether any enforceable order can be passed by this Court in these petitions?

The Supreme Court also stated in its Order that the Judgment S. Subramaniam Balaji v. State of Tamil Nadu, (2013) 9 SCC 659 requires reconsideration. In the said Judgment also, the Court had been asked to determine whether pre-election promises amounted to corrupt practices under Section 123 of the Representation of the People Act, 1951 (Corrupt practices).

There is no doubt that freebies that are so generously offered by political parties are an incentive for voters, most of whom are from the lower class. This offer of freebies definitely prejudices the uneducated and the poor to vote for the party that makes the offer. Hence, a party that wins on the basis of such freebies violates a fair and free election and is definitely accountable to the public for its behaviour. Possibly, the most important point that the Petitioners urged in the Writ Petition is that the money which is being distributed freely is the hard-earned money of tax payers who do not get any benefit from such distribution. India may be a democracy but surely there has to be checks and balances, for distribution of the tax payers’ money at the cost of the tax payer.

The final decision passed by this specially constituted Bench would be reported on the Blog, when the matter is disposed off.