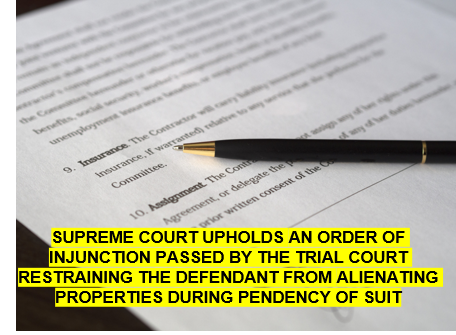 In the present case titled as Harish Ishwarbhai Patel v. Jatin Ishwarbhai Patel and Ors. SLP (Civil) No. 16483 of 2022, a two Judge Bench of the Supreme Court comprising of Justice Aniruddha Bose and Justice Vikram Nath, vide Judgment dated 21.10.2022 allowed the Appeal filed against the Order of the Gujarat High Court (High Court) setting aside the Trial Court Order, whereby it allowed the Application for Temporary Injunction to restrain the Defendants from disposing of the Suit Property during the pendency of proceedings pertaining to distribution of assets under the Will in question.

In July 2007, the Appellant started his own Security Services by the name of ‘Global Services’. The Deceased breathed his last on 17.01.2021. It was at this stage that the Will came into light, according to which, the Appellant and the Deceased’s Wife were excluded and it was only the Respondent no.1 and Respondent no.2 who were made the beneficiaries of the self-acquired immovable assets of the Deceased.

The Appellant tried to claim his 1/4th share in the properties of his father but the same was denied despite request which compelled him to institute a Suit for Declaration, Partition and other reliefs before the Trial Court.

The Appellant along with the Plaint also filed an Application for ad-interim injunction under Order 39 Rule 1 (Cases in which temporary injunction may be granted) and 2 (Injunction to restrain repetition or continuance of breach) of the Civil Procedure Code, 1908 (CPC) on the grounds that it was executed under suspicious circumstances and, that the Deceased did not have the right to execute Will of the immovable properties which were acquired from the profits and proceeds of the Partnership of which the Appellant was also a partner and as the said Properties were owned by the Partnership Firm and not by the Deceased exclusively.

The Trial Court vide Order dated 15.02.2022 allowed the Application for Temporary Injunction and directed the Defendants to maintain status quo of the Properties mentioned in the aforesaid Will. The Order further directed the Defendants to furnish the list and account of the movable properties of the Deceased. The findings of the Trial Court were based on three grounds i.e. prima facie case, balance of convenience and irreparable loss.

Aggrieved by the said Order of the Trial Court, the Respondent nos.1, 2 and 3 preferred an Appeal under Order 43 Rule 1(Appeal from Orders) of CPC before the High Court. The High Court, while allowing the Appeal made following observations vide Order dated 30.06.2022:

Therefore, based on the abovementioned observations, the High Court vide Order dated 30.06.2022 quashed and set-aside the Order of the Trial Court.

Aggrieved by the aforementioned Impugned Order of the High Court dated 30.06.2022, the Appellant filed an Appeal before the Apex Court assailing the correctness of the Impugned Order.

The Supreme Court vide Judgment dated 21.10.2022, observed that “We had also required the parties to give proposal so as to meet the ends of justice and protect the interest of the appellant. However, that effort has failed as the proposal given by the respondents is not acceptable to the appellant. Respondents are willing to not give an undertaking that they will not alienate the properties during the pendency of the suit but have only offered that some of the properties would not be alienated, which offer is not accepted by the appellant.

Having heard learned counsel for the parties and having perused the material on record, we are of the view that the order of status quo passed by the trial court was justified in the facts and circumstances of the case. We are not entering into the merits of the matter as it may influence the trial court. We, therefore, allow this appeal, set aside the impugned order of the High Court dated 30.06.2022 maintaining the order of the trial court in order to advance justice between the parties.”

Thus, the Apex Court stated that the Trial Court was justified in passing an Injunction Order against alienation of Suit Property, as the Defendants had not agreed to give an undertaking that they will not alienate the Suit Properties during the pendency of the Suit. Therefore, the Supreme Court allowed the Appeal and set aside the Impugned Order of the High Court.