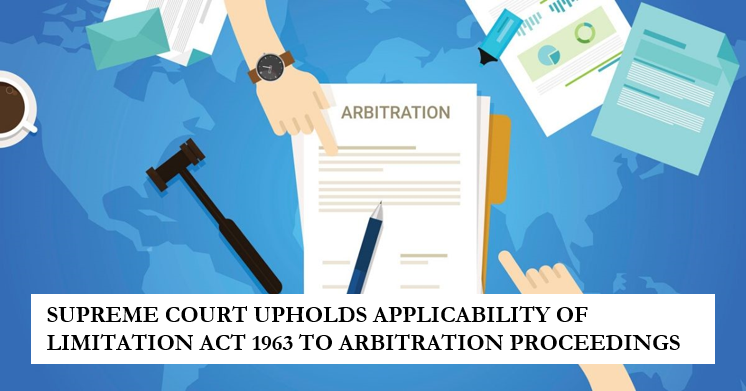 The #SupremeCourt has in a recent case of M/s. Silpi Industries etc. vs Kerala State Road Transport Corporation & Anr. etc. passed a #Judgment dated 29-06-2021 and decided upon various issues including the issue on whether #Limitation Act, 1963 is applicable to the proceedings under the Arbitration and Conciliation Act 1996 (#Arbitration Act) arising out of Micro, Small and Medium Enterprises Development Act, 2006 (MSMED Act).

In this case, Kerala State Road Transport Corporation, the Respondent No. 1 herein, invited tenders for supply of thread rubber for tyre rebuilding. M/s Silpi Industries, the Appellant herein, was given the purchase orders, according to which, 90% of the purchase price was to be given to the Appellant on supply of materials and balance 10% subject to final performance report. However, when the balance 10% was not paid to the Appellant-Supplier, they approached the Industrial Facilitation Council [previously constituted under the Interest on Delayed Payments to Small Scale and Ancillary Industrial Undertakings Act, 1993 (for short, ‘IDPASC Act’)], which is presently the Micro and Small Enterprises Facilitation Council (Council) constituted under the MSMED Act. The Councils have been set up under Section 20 of the MSMED Act for settlement of disputes between MSME buyers and suppliers and conciliation under Section 18 of the MSMED Act. In case the settlement/conciliation fails before the Council, the matter can be referred to arbitration and the provisions of Arbitration Act would apply to such dispute as if the arbitration was in pursuance of an arbitration agreement.

But as the conciliation failed in this case, the claims made by the Appellant-Supplier herein were referred to arbitration under Section 18 (3) of the MSMED Act. The Arbitrator passed an Award dated 05-08-2014 (Arbitration Award) in favor of the Appellant-Supplier herein. Thereafter, the Respondent No. 1-Buyer challenged the said Arbitration Award under Section 34 of the Arbitration Act before the Kerala High Court. The High Court dismissed the said Section 34 Application vide Order dated 05-08-2014.

In this matter, various issues were raised by the parties including the issue pertaining to allowing the buyer to file counter claim and set off under Arbitration Act and not MSMED Act and with regard to issue of applicability of Limitation Act 1963 to arbitration proceedings arising from MSMED Act.

The Apex Court made the following observations in this matter:

2) Therefore, in the event that there is an arbitration agreement between two parties, where the seller is covered by the MSMED Act, then in case of dispute, the seller is entitled to directly approach the Council under MSMED Act and not resort to arbitration primarily. Further, the buyer would be entitled to file a counter claim before the Council itself, although there is no provision to this effect in the MSMED Act, so that the objective of the said Act is not defeated.

3) That Section 43 of the Arbitration Act provides that the Limitation Act 1963 shall apply to arbitrations as it applies to court proceedings. Similarly, in a case where a dispute settlement/conciliation fails before the Council and the said matter is referred to arbitration under Section 18 (3) of the MSMED Act, the Limitation Act would also apply to such arbitration proceedings that arise out of disputes that could not be settled under Section 18 (3) of the MSMED Act.

Thus, based on the aforesaid observations, the Supreme Court dismissed the Appeal filed by the Appellant-Supplier and held that on a harmonious construction of the provisions of MSMED Act and the Arbitration Act, the Respondent No. 1- Buyer is entitled to file a counter-claim before the statutory authorities under MSMED Act.