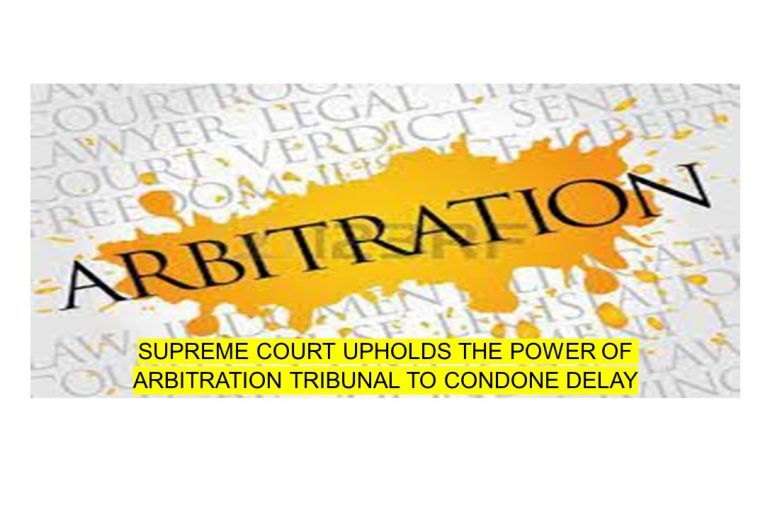 A Division Bench of the Supreme Court comprising of Justice Ajay Rastogi and Justice Abhay S. Oka, on 15.03.2022, upheld the power of the Arbitral Tribunal to condone delay, while deciding the case of Bihar Industrial Area Development Authority & ors. v. Rama Kant Singh (CIVIL APPEAL NO. 2030 OF 2022).

In accordance with the Bihar Public Works Contracts Disputes Arbitration Tribunal Act, 2008 (‘the 2008 Act’), the Bihar Public Works Contract Disputes Arbitration Tribunal (‘the Arbitration Tribunal’) was constituted for dealing with and deciding the disputes between the parties to a works contract. As per Section 9 of the 2008 Act, any party of a works contract may refer a dispute arising between the parties to the contract, to the Arbitral Tribunal, irrespective of the presence of an arbitration clause in the contract, within a year of the date from which the dispute has arisen.

The Respondent referred the matter to the Arbitral Tribunal on 21.03.2013, though the dispute arose on 08.06.2010. The Arbitral Tribunal on 15.09.2014, while rejecting the contention of the Appellant that the reference is barred by limitation as it has not been made within a year of when the dispute arose. The Respondent therein had pleaded that the Article 137 of the Limitation Act, 1963 (‘the 1963 Act’) would be applicable and therefore the reference was not barred. Accepting this view, the Arbitral Tribunal made an award that Respondent was entitled to a refund of the earnest money and the security deposit. The Tribunal also granted simple interest at the rate of 10% per annum on the amount to be refunded.

The Appellant challenged the award made by the Tribunal in the High Court. The High Court held that Article 137 of the 1963 Act would be applicable and, thus, the dispute raised by the Respondent was not barred by limitation.

The Supreme Court considered the observation made by the High Court that the delay in making the reference was sufficiently explained by the Respondent through submission that the representation made by him against the termination of contract was not decided by the Appellant for a long time. Since the Arbitral Tribunal has the power to condone the delay in making a reference, the Apex Court held that it would not be reasonable to interfere with the award of the Arbitral Tribunal on the ground that the reference was made with delay.