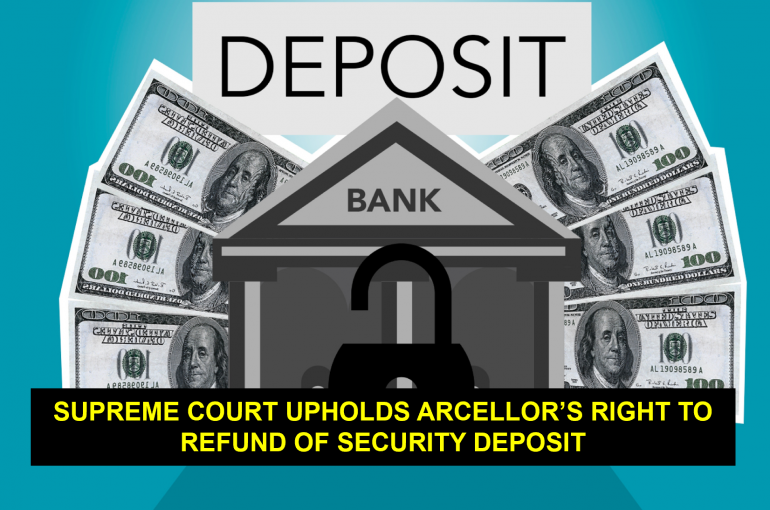 In the present case titled as Essar House Private Limited Versus Arcellor Mittal Nippon Steel India Limited in SLP (C) No. 3187 of 2021, the Supreme Court vide judgment dated 14.09.2022, held that even if any prior inter se arrangement existed between the parties, Essar Services India Private Limited (Essar Services) could not have adjusted the security deposit payable to Essar Steel India Limited (Essar Steel) under the amended agreement against the alleged dues of Essar Steel to a third party during the CIRP.

The petitions filed by the Standard Chartered Bank and State Bank of India against Essar Steel India Limited under Section 7 of the Insolvency and Bankruptcy Code, 2016 were admitted by the Ahmedabad Bench of the National Company Law Tribunal (NCLT) on 02.08.2017.

By an Order dated 08.03.2019, a Resolution Plan submitted by Arcellor Mittal Nippon Steel India Limited (Arcellor) as a Resolution Applicant was approved by the Adjudicating Authority (NCLT), Ahmedabad Bench and the said Order was subsequently confirmed by the Appellate Tribunal (NCLAT). On 27.11.2019, Arcellor was called upon by Essar House Private to vacate the Essar House situated at Keshavrao Khadye Marg, Opposite Race Course, Mahalaxmi, Mumbai.

The Respondent-Arcellor contended that despite sending scores of mails requesting the refund of interest-free security deposit of around Rs 35.52 crore, the Appellants refused to do so on the ground that no security deposit was left to be refunded to Arcellor as it had taken over loan of Rs 26 crore due from Essar Steel to Marvel Mines and had adjusted the same against the security deposit kept by Essar Steel.

Further, another Application was filed by the Respondent-Arcelloe in the High Court with respect to Rs.4,75,06,260 paid to Essar Services on behalf of Essar Steel in settlement of its claims/dues, seeking orders directing Essar Services to deposit the said amount with the Prothonotary and Senior Master of the High Court.

The Order of the Single judge was upheld by the Division Bench of the High Court that directed Essar Services and Essar House to deposit Rs 47.41 crore and 35.5 crore, respectively, with the High Court or furnish a bank guarantee of any nationalised bank for the entire amount with interest.

Aggrieved by the Order of the High Court dated 01.02.2021 and 10.12.2020, Essar House Private Limited filed an Appeal before the Supreme Court under Section 37 of the Arbitration and Conciliation Act, 1996. The Supreme Court observed as follows:

1) Although the Court is not strictly bound by the provisions of the Civil Procedure Code (CPC) with regards to its powers to grant interim relief under Section 9 of the Act, it should not turn a blind eye to the basic principles of the CPC while deciding a petition under the said provision.

3) For granting interim relief under the said Act, corroborating the actual attempts to remove or dispose of the property for the purpose of defeating or delaying the realisation of an impending Arbitral Award does not form an indispensable part of the Petition.

It is rightly said that procedure is the handmaid of justice and not its mistress. Hence, taking this into account and based on the above observations, the Supreme Court held that prima facie, the refundable security deposit is not being released to Arcelloe on the purported ground of a convoluted series of internal arrangements between group companies for diversion of the security deposits towards liquidation of alleged dues of Essar Steel to third parties.

The Apex Court was of the opinion that the Division Bench of the High Court had considered the contentions of the Appellant and rightly held as under:

“33. The affidavit of disclosure filed by the appellant on 21st January, 2021 annexed at Ex.B also clearly indicates that the appellant was heavily indebted and did not have asset other than the asset disclosed in the affidavit in reply. xxx xxx xxx 39. There is no substance in the submission made by the learned counsel for the appellant that since the appellant had already disclosed in the reply to the petition under section 9 that there was only one asset in the hands of the appellant and the same was also mortgaged, learned single Judge could not have passed an order of deposit or to furnish a bank guarantee in lieu of the order of deposit under section 9 of the Arbitration Act. In our view, the Court has ample power under Section 9 to secure the claim of the applicant in arbitration. Merely because the appellant has disclosed before the learned Single Judge that it does not have any asset other than one asset and that also is fully encumbered, that does not preclude the Court under Section 9 of the Arbitration Act to pass an equitable order by securing the claim of the applicant in arbitration by directing the opponent to deposit such amount to furnish a bank guarantee once having rendered a prima-facie finding that the applicant would 18have good chances of succeeding in the arbitration and if the claim made by the applicant is not secured, he would not be able to enjoy fruits of the arbitral award on its execution. xxxxxxxxx 43. If the Court is required to dismiss the petition under section 9 of the Arbitration Act on the ground that the opponent has no assets at all or the assets of the opponent are fully encumbered, it will be against the principles of equitable justice required to be exercised by the Court while exercising powers under section 9 of the Arbitration Act so as to secure the claim of the applicant in the arbitral proceedings though he may have prima-facie good chances of succeeding in arbitration.”

The Apex Court was therefore of the view that it is not in dispute that Essar was liable to refund the security deposit of about Rs. 35.5 crores. As a result, the Appeal was dismissed.