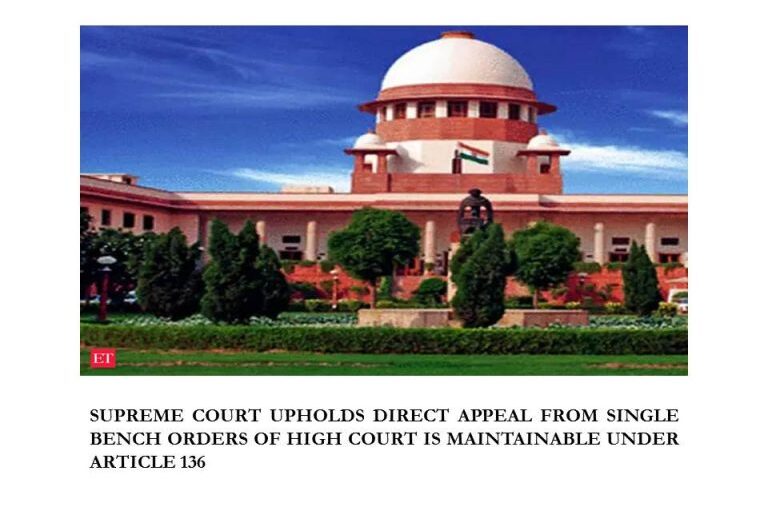 A Two Judge Bench of the Hon’ble #SupremeCourt of India comprising of Justices Uday Umesh Lalit, S. Ravindra Bhat And Bela. M. Trivedi passed a #Judgment dated 28-09-2021 in the case of Indian Institute of Technology Kharagpur & Ors. v. Soutrik Sarangi & Ors. Arising Out Of SLP(C) No.13920 Of 2021 and held that under Article 136 of the #Constitution of India, the Supreme Court’s discretion is flexible and sufficiently wide, to correct glaring errors and #injustices.

In the present case, one Soutrik (Respondent) appeared in the Joint Entrance Examination, (Main) 2020 and thereafter, qualified and appeared in the JEE (Advanced), 2020. He scored rank 4015 which was not up to his expectation. He then participated in the counselling process for admission in the Institute and secured admission in the Chemical Engineering Dual Course, at IIT Kharagpur.

The Petitioner (IIT/Institute) resisted the Writ Petition and justified the impugned criterion, contending that it was neither illegal nor unconstitutional and was based on sound public policy considerations.

The High Court allowed the Writ Petition filed by the Respondent holding that the rejection of his candidature for admission to the Joint Entrance Examination (JEE) Advanced, was not justified.

Aggrieved, an Appeal was filed in the Hon’ble Supreme Court of India. The Respondent argued that the Appeal should not be maintained as the Petitioner has directly approached the Court without availing itself of the normal remedy of an appeal before the Letter Patent Appeal (LPA) Bench.

After taking into consideration the facts of the present case and the arguments advanced by the parties to the dispute, Supreme Court observed that the Objection on behalf of the Respondent that the Petitioner should have approached the Division Bench in Letter Patent jurisdiction of the Calcutta High Court is insubstantial. The Court while placing reliance on the case of Ref State of UP v Harish Chandra & Ors 1996 (9) SCC 309 made the following observation in this regard

“The ordinary rule of necessity that litigants should approach and avail of appellate remedies exhausting them before approaching this Court is a rule of convenience and not an immutable practice.”

Furthermore, the Apex Court observed that under Article 136 of the Constitution of India, the discretion is flexible sufficiently wide, to correct glaring errors and injustices.

The Apex Court while taking into consideration the fact that a Notice was issued on 09-09-2021 and an Interim Order was also issued, suspended the directions of the High Court. On the two subsequent dates of hearing, i.e. 17-09-2021 and 24-09-2021, there was no objection on the part of the Respondent with respect to the maintainability of the Petition. Hence the objection raised by the Respondent was overruled.

As regards the impugned criterion, the Bench held that it was valid and aimed at conserving a valuable public resource, i.e. seats in IITs. The Court set aside the impugned Judgment and directions of the High Court. Subsequently, the Writ Petition of the Respondent was dismissed.