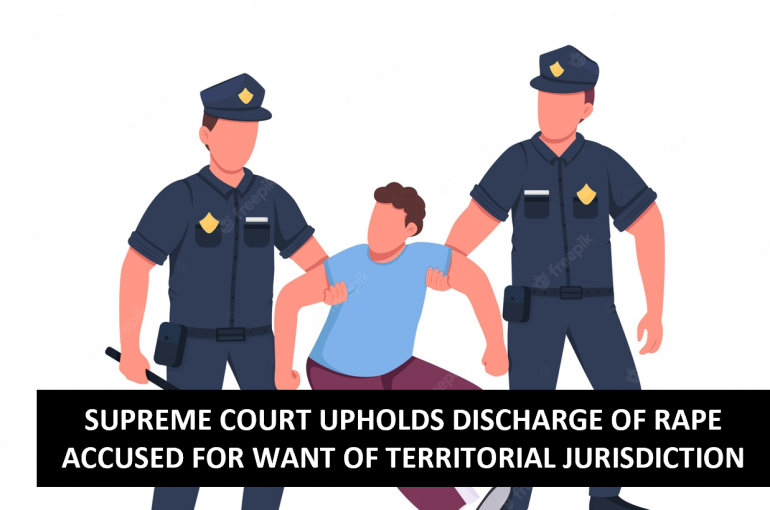 In a recent case of Ms. P vs State of Uttarakhand Criminal Appeal No. 903 of 2022, a two-Judge Bench of the Supreme Court comprising of J. Dinesh Maheshwari and J. Vikram Nath has passed a Judgment dated 16-06-2022 and upheld the Order dated 28-10-2017 passed by the Sessions Judge, Chamoli discharging a rape accused for want of territorial jurisdiction. The Apex Court further observed that where two or more offences are alleged to have been committed by an accused at different places, either of the competent courts can inquire and try the offences together, only if it is established that the series of acts so connected together, form the same transaction.

Thereafter, the Appellant filed a Complaint under Section 156 (3) of the Code of Criminal Procedure 1973 (CrPC) before the Judicial Magistrate First Class, Gairsain, District Chamoli (Magistrate), thereby, complaining of police inaction on the Complaint earlier made by her mother. The Learned Magistrate vide Order dated 21-01-2017 directed the police to investigate and register a First Information Report (FIR). Accordingly, the Police registered an FIR bearing No. 3 of 2017 for offences under Sections 376 of the Indian Penal Code 1860 (IPC) (Punishment for rape), 504 IPC (Intentional insult with intent to provoke breach of the peace) and 506 IPC (Punishment for criminal intimidation); and in view of the involvement of offence under Section 376 IPC, the case was committed to the Court of Sessions Judge, Chamoli.

The Sessions Judge, Chamoli heard the case in Sessions Trial No. 8 of 2017 and passed an Order dated 28-10-2017, thereby observing that the offence of rape under Section 376 IPC had taken place at Delhi. The said offence is not continuing in nature. Further, the threats given by the Respondent No. 4-Accused to the Appellant did not constitute a kind of offence which could be said to be in the series of same transaction. Therefore, the Learned Sessions Judge concluded that the Accused was entitled to be discharged in relation to the offence under Section 376 IPC for want of territorial jurisdiction with liberty granted to the Appellant to proceed against the Accused before the appropriate Court. Further, the Sessions Judge remitted the matter back to the Court of Judicial Magistrate for trial of the remaining offences pertaining to Sections 504 and 506 IPC.

Meanwhile, the Learned Magistrate conducted the trial in Criminal Case No. 137 of 2017 and passed a Judgment dated 01-05-2019, thereby observing that the Appellant could not prove that the Accused hurled abuses or gave death threats to the appellant and her family. As a result, the Accused was acquitted under Sections 504 and 506 IPC.

1) That as per Section 177 of the Code of Criminal Procedure 1973 (CrPC) (Ordinary place of inquiry and trial) “every offence shall ordinarily be inquired into and tried by a Court within whose local jurisdiction it was committed.”

2) That as per Section 184 CrPC (Place of trial for offences triable together) read with Section 220 CrPC (Trial for more than one offence), the offences may be inquired into or tried by any Court competent to inquire into or try any of the offences. Thus, either of the competent courts can inquire and try the offences together, if it is established that the series of acts so connected together, form the same transaction.

3) In order to determine if a series of acts are so connected together, form the same transaction, Courts may consider the proximity of time and place, continuity of action, etc.

5) That the allegations of offences committed by the Respondent No. 2 are distinct from each other, i.e. offence of rape in Delhi, offence of hurling abuses and extending threats on phone calls at District Chamoli.

Thus, based on the aforesaid observations, the Supreme Court held that the aforesaid acts were not proximate in time or place and there was no continuity either. Hence, it cannot be deemed to be a series of acts so connected together that form the same transaction. Therefore, the offence under Section 376 IPC as allegedly committed at Delhi, being different and distinct from the other offences under Sections 504 and 506 IPC and being not of same transaction, could not have been tried by the Sessions Courts at Chamoli. Hence, the Sessions Judge Order dated 28-10-2017 was upheld. As a result, the Appeal was dismissed.