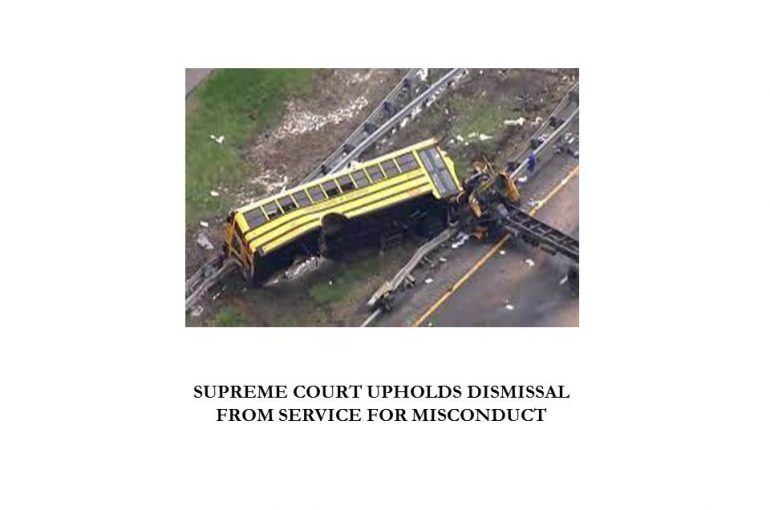 In a recent Judgment, passed by the Division Bench of Justices M.R. Shah and B.V. Nagarathna, titled Maharashtra State Road Transport Corporation v. Dilip Uttam Jayabhay, Civil Appeal No.7403 of 2021, the Court upheld dismissal of an employee for misconduct even though the driver who had committed the accident was acquitted by the Criminal Court for the accident that had occurred.

A very brief overview, the Respondent-Driver who was an employee of Maharashtra State Road Transport Corporation (MSTC) had while driving a bus committed an accident with a jeep coming from the opposite side. The said accident resulted in the death of four passengers and serious injuries to six passengers. The driver underwent a disciplinary enquiry and MSTC found him guilty for misconduct and consequently dismissed him from service. A criminal case was lodged against the driver for negligence and rash driving. However, the Court did not find sufficient evidence to convict him and he was acquitted.

The matter came up in the Supreme Court in Appeal wherein the Apex Court was of the opinion that in the Departmental Proceedings, the misconduct of the driver has been proved. Therefore, the short question before the Court was whether in the facts and circumstances of the case, the punishment of dismissal can be said to be an unfair labour practice and whether the same is disproportionate to the misconduct alleged by the MSTC. the Apex Court after going through the records of the Departmental enquiry and Orders passed by the Labour Court, Industrial Court and Order of acquittal passed by the Criminal Court held that on looking at the cause of action, it appears that the driver was driving at great speed and rashly due to which four people died. Therefore, even though the criminal Court has not held him guilty, he is guilty of contributory negligence which caused havoc and as such, he is guilty.

The Court further held that the acquittal by the Criminal Court is based “on the hostility of the witnesses and the evidence of the interested witnesses; lacuna in examination of the investigating officer; panch for the spot panchnama of the incident, etc. Therefore, criminal court held that the prosecution has failed to prove the case against the respondent beyond reasonable doubt. On the contrary in the departmental proceedings the misconduct of driving the vehicle rashly and negligently which caused accident and due to which four persons died has been established and proved. As per the cardinal principle of law an acquittal in a criminal trial has no bearing or relevance on the disciplinary proceedings as the standard of proof in both the cases are different and the proceedings operate in different fields and with different objectives. Therefore, the Industrial Court has erred in giving much stress on the acquittal of the respondent by the criminal court. Even otherwise it is required to be noted that the Industrial Court has not interfered with the findings recorded by the disciplinary authority holding charge and misconduct proved in the departmental enquiry, and has interfered with the punishment of dismissal solely on the ground that same is shockingly disproportionate and therefore can be said to be an unfair labour practice as per clause No. 1(g) of Schedule-IV of the Maharashtra Recognition of Trade Unions and Prevention of Unfair Labour Practices Act, 1971.”