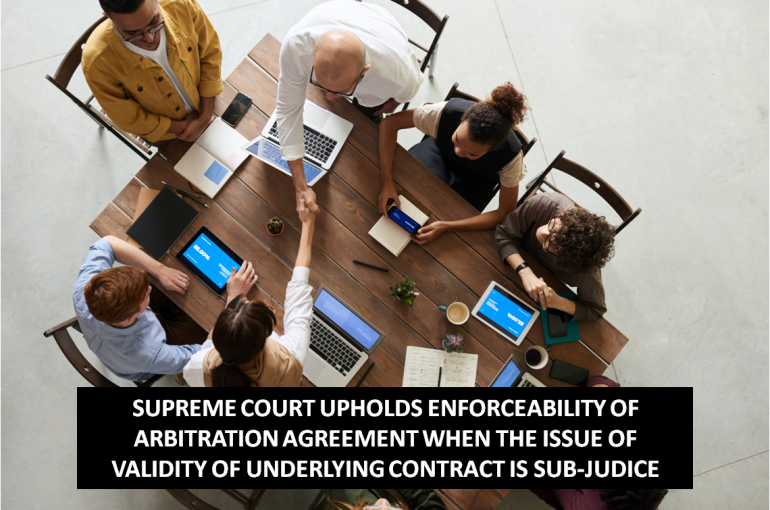 A Two Judge Bench of the Supreme Court presided by Justice Uday Umesh Lalit and Justice Bela M. Trivedi passed a Judgment dated 20.10.2022 in Weatherford Oil Tool Middle East Limited Versus Baker Hughes Singapore Pte in Arbitration Petition No. 03 OF 2022 and two other connected petitions and decided upon the enforceability of arbitration agreement and appointment of arbitrator under Section 11(6) (Appointment of Arbitrators) read with Section 11(12) of the Arbitration and Conciliation Act, 1996 (hereinafter referred to as Arbitration Act, 1996), when the issue of validity of underlying contract is sub-judice.

The Petitioner, WeatherFord Oil Tool Middle East Ltd is a Company incorporated in the British Virgin Islands, engaged in the business of providing products and services for mud logging, drilling jars, etc and oilfield equipments. The Respondent, Baker Hughes Singapore PTE is a Company incorporated under the laws of Singapore and engaged in providing oilfield services to Vedanta Limited (“Operator”).

The Respondent further made a proposal (a) for referring the disputes under the Agreements to mediation and (b) for consolidation and adjudication of disputes arising from the Agreements by a sole arbitrator. Since none of the correspondences worked between the Parties, the Petitioner filed three Arbitration Petitions before the Supreme Court under Section 11(6) read with Section 11(12) of the Arbitration Act, 1996, seeking appointment of a sole arbitrator to adjudicate upon the disputes arising out of the three Agreements executed between the Parties.

2) The Supreme Court held that since the Arbitration Clause contained in all the three Agreements namely, Onshore Service Agreement, Lease Agreement and Drilling Service Agreement were not disputed by the Respondent, and since the Respondent itself had proposed to consolidate the disputes under the said Agreements and to refer them to a sole arbitrator in one single arbitration, the Apex Court is of the opinion that now it does not lie in the mouth of the Respondent to say that the Petitions seeking appointment of a sole arbitrator should not be entertained, on the ground that the matter with regard to the determination of requisite stamp duty under the Maharashtra Stamp Duty Act on the two Agreements is pending before the Collector.

3) The Hon’ble Supreme Court further observed as follows, “As held by this Court in N.N Global Mercantile Unique Pvt. Ltd. Vs. Indo. Unique Flame Ltd. and Others, (2021) 4 SCC 379, there is no legal impediment to the enforceability of the arbitration agreement pending payment of stamp duty on the substantive contract. Of course, the said issue is pending under consideration by the Constitution Bench, nonetheless as observed by this Court in Intercontinental Hotels Group (India) Pvt. Ltd. & Anr. Vs. Waterline Hotels Private Limited, (2022) 7 SCC 662, the matters which are still pending at a pre-appointment stage, cannot be left hanging until the larger Bench settled the issue. Following the said proposition and considering the time sensitivity in the arbitration cases, we deem it appropriate to entertain the present petitions and allow the same”.

Thus, based on the aforesaid reasoning, the Apex Court observed that although the issue with respect to enforceability of the arbitration agreement pending payment of stamp duty on the substantive contract, is sub-judice before a Five Judge Bench of the Supreme Court, but the Bench in the present case, allowed all the three Arbitration Petitions, as arbitration cases are time sensitive and further appointed Mr. Suresh C. Gupte, former Judge, High Court of Bombay as a sole Arbitrator to adjudicate upon the disputes arising out of the said three Agreements treating it as one single arbitration.