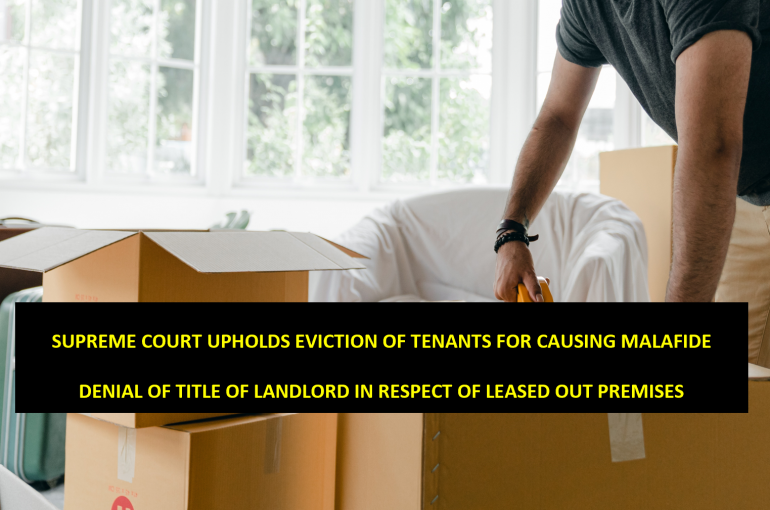 Recently, a two Judge Bench of the Supreme Court comprising of Justice Indira Banerjee and Justice C.T. Ravikumar passed a Judgment dated 22-09-2022 in the matter of Gopi @ Goverdhannath (d) by LRs. & Ors. Vs Sri Ballabh Vyas Civil Appeal No. of 2022 and observed that the Appellants-Tenants denied the Respondent-Landlord’s title in respect of the leased out premises with malafide intention and thus, upheld the lower Courts’ Order for eviction of Tenants.

The Ld. Rent Controller passed an Order dated 07-11-2015 thereby directing eviction of the Appellants-Tenants from the Schedule Property and handover of vacant physical possession of the same to the Respondent-Landlord.

Thus, the aforesaid facts and circumstances prove that the Appellants’ denial of Respondent’s title to the Schedule Property was made with a malafide intention and the High Court further held that Denial of the title of landlord by the tenant with mala fide intention itself is a sufficient ground to evict the tenant from the plaint schedule property.

As a result, the Civil Revision Petition was dismissed by the High Court, vide Order dated 10-07-2018.

Aggrieved, the Appellants-Tenants approached the Supreme Court, which passed a Judgment dated 22-09-2022 and made the following observations:

1) That the Respondent-Landlord produced his Registered Sale Deed dated 27-06-1985 to prove that the denial of Respondent’s title by Appellants-Tenants is not bona fide.

2) That as per Section 54 of the Transfer of Property Act 1882 (Sale) read with Section 17 of the Registration Act 1908 (Documents of which registration is compulsory) an instrument recording the sale of an immovable property of a value more than Rs. 100 is to be compulsorily registered. The real purpose of the said Section is to secure that every person dealing with the property, where such documents require registration, may rely with confidence upon statements contained in the register as a full and complete account of all transactions by which title may be affected.

3) That the genuineness of denial of Respondent’s title cannot be based on presumptions and oral assertations of the Appellants. The Appellants have not produced any document to show that they have title to the Schedule Property. Even though the Appellants claim that their father had paid so-called consideration for the alleged sale done in his favor, such a sale could have happened only through a registered deed of conveyance, which is not produced in this case.

4) That further, in terms of Section 109 of the Transfer of Property Act (Rights of lessor’s transferee), when Ms. Phool Kumari transferred the leased out-Schedule Property in favor of the Respondent-Transferee, the latter stepped into the shoes of the original landlord. Any specific attornment / formal transfer of rights and liabilities in respect of lease to the Respondent-Transferee is not required. Thus, it is clear that jural relationship of landlord and tenant existed between the Respondent and the Appellants.