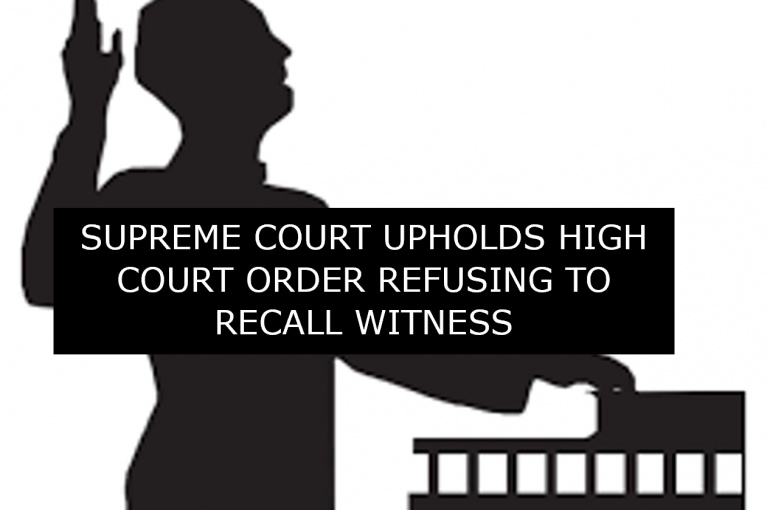 In a recent Criminal Appeal, a two Judge Bench of the Supreme Court comprising of Justice C.T. Ravikumar and Justice Sudhanshu Dhulia passed an Order and Judgement dated 21.06.2022 in ‘Saud Faisal v. State of Uttar Pradesh & Anr. (Special Leave to Appeal (Crl.) No(s). 5647/2022)’ and set aside the Order and Judgement dated 16.05.2022 (Impugned Order) passed by the High Court of Allahabad and held that merely because a different statement was given by the same prosecution witness in another case relating to the same incident, that itself would not be a reason for recalling the witness.

In this case, one, Saud Faisal, the Appellant-Accused was facing trial for an offence under Section 302 of the Indian Penal Code, 1860 (Punishment for murder). One, Nausad, Prosecution Witness No.1 (PW1), on 11.08.2014 gave a statement in his examination-in-chief that he had clearly identified the Accused Saud Faisal as one of the assailants who was carrying a rifle. The PW1 was also put to a lengthy cross-examination but it could not contradict his testimony. Relating to the same incident, the Accused was also facing a case under the Gangsters Act, more specifically known as the U.P. Gangsters and Anti-Social Activities (Prevention) Act, 1986. The same witness (PW1) was examined in that proceeding as PW1 on 20.09.2021. He gave a statement that he could not identify the Accused, as he was wearing a cloth on his face. Relying on the second statement given by PW1 in 2021, the Accused filed an Application in the Trial Court under Section 311 of the Code of Criminal Procedure, 1973 (CrPC) (Power to summon material witness, or examine person present) to recall him as a witness in the first trial. Section 311 of CrPC is reproduced below for easy reference:

The Supreme Court held that, “The Trial Court has rejected this application and in our view rightly so, for the reasons that merely because a different statement given by the same prosecution witness in another case that itself would not be a reason for recalling the witness and that too, after a period of seven years. It is not a case where a contradictory statement was given by some other witnesses in the present trial.”

The Apex Court, therefore, dismissed the Appeal and reaffirmed the Order dated 16.05.2022 passed by the High Court.