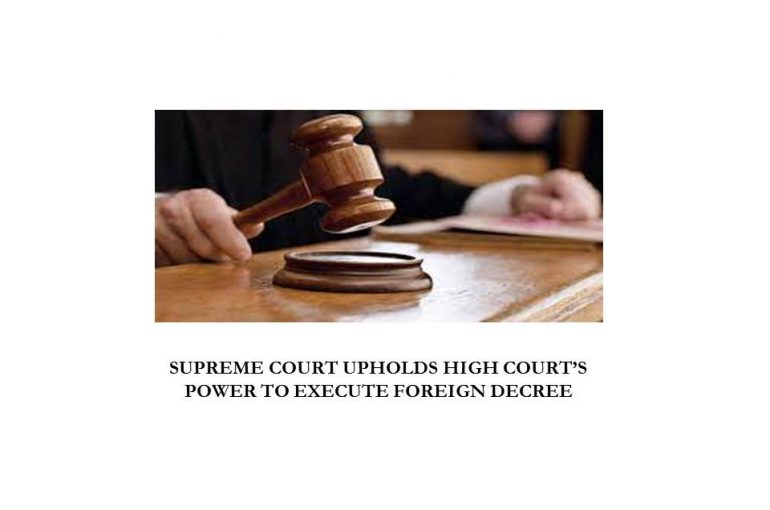 A Division Bench of the Hon’ble Supreme Court of India comprising of Justices Ajay Rastogi and Abhay S. Oka passed a Judgment dated 28-01-2022 in the case of Messer Griesheim Gmbh (Now Called Air Liquide Deutschland GmbH) v. Goyal Mg Gases Pvt. Ltd {Civil Appeal No(S). 521 of 2022 (Arising out of SLP (Civil) No(s). 22539 of 2014)} held that once the pecuniary jurisdiction exceeds, the High Court has the ordinary original civil jurisdiction for execution of a foreign decree under Section 44A.

For reference, Section 2(4) and Section 44A of the Code of Civil Procedure, 1908 are reproduced below:

Section 44A- Execution of decrees passed by Courts in reciprocating territory.

(2) Together with the certified copy of the decree shall be filed a certificate from such superior Court stating the extent, if any, to which the decree has been satisfied or adjusted and such certificate shall, for the purposes of proceedings under this section, be conclusive proof of the extent of such satisfaction or adjustment.

(3) The provisions of section 47 shall as from the filing of the certified copy of the decree apply to the proceedings of a District Court executing a decree under this section, and the District Court shall refuse execution of any such decree, if it is shown to the satisfaction of the Court that the decree falls within any of the exceptions specified in clauses (a) to (f) of section 13.

Explanation 2.– “Decree” with reference to a superior Court means any decree or judgment of such Court under which a sum of money is payable, not being a sum payable in respect of taxes or other charges of a like nature or in respect of a fine or other penalty, but shall in no case include an arbitration award, even if such an award is enforceable as a decree or judgment.

In the present case, the Appellant had initiated proceedings before the High Court of Justice, Queen’s Bench Division, Commercial Court, United Kingdom (English Court). The said Court is a superior Court of a reciprocating territory (namely, United Kingdom of Great Britain and Northern Island) notified under Section 44A of the Code vide Notification No. SRO 399 dated 01-03-1953 issued by the Ministry of Law as amended by GSR 201 dated 13-03-1958. A default decree was passed on 06-02-2003, due to the non-appearance of Respondent/Judgment Debtor in UK Court. Thereafter, the Appellant issued a winding up notice to the Respondent, who objected to the same on the ground that the Judgment dated 06-02-2003 was a default decree. In pursuance to this, the Appellant approached the English Court and sought for the setting aside of the default decree and prayed for passing a decree on merits of the case.

The preliminary objections were overruled by the Ld. Single Judge of the High Court and the Execution Petition was decided on 29-11-2013. The Ld. Single Judge allowed the Application. The Respondent/Judgment Debtor assailed the Judgment dated 29-11-2013 before the Division Bench of the High Court. The Division Bench vide Judgment dated 01-07-2014, held that the High Court, not being a District Court, in terms of Section 44A of the Code, is not vested with the jurisdiction to entertain execution petition and directed to be transferred to the Court of   District Judge within whose jurisdiction the property sought to be attached is situated for being dealt with in accordance with law.

Impugning the Judgment dated 01-07-2014, an Appeal was filed in the Hon’ble Supreme Court of India. After taking into consideration the facts of the case and the arguments advanced by the parties to the dispute, the Apex Court observed that an important question which needs to be addressed here is “whether the High Court of Delhi in exercise of its original jurisdiction is a competent   Court to entertain a petition for executing a money decree (in excess of Rs.20 lakhs) of a foreign Court which is notified as a superior Court of reciprocating territory under Section 44A of the Code?”

In this regard, the Bench made the following observation:

“28. It   leaves   no   manner   of   doubt   that   once   the   pecuniary jurisdiction at the given point of time exceeded Rs. 20 lakhs as notified by the High Court under Section 5(2) of the Act 1966 (later vide notification dated 10th August, 2015 (w.e.f. 26th October, 2015) pecuniary limits has been revised to Rs.2 crores), it is the High Court of Delhi which holds its exclusive jurisdiction as ordinary original civil jurisdiction to execute a foreign decree under Section 44A of the Code and it goes without saying that execution always is in continuation of the proceedings.”

Therefore, the Apex Court while setting aside the Judgment dated 01-07-2014, allowed the Appeal.