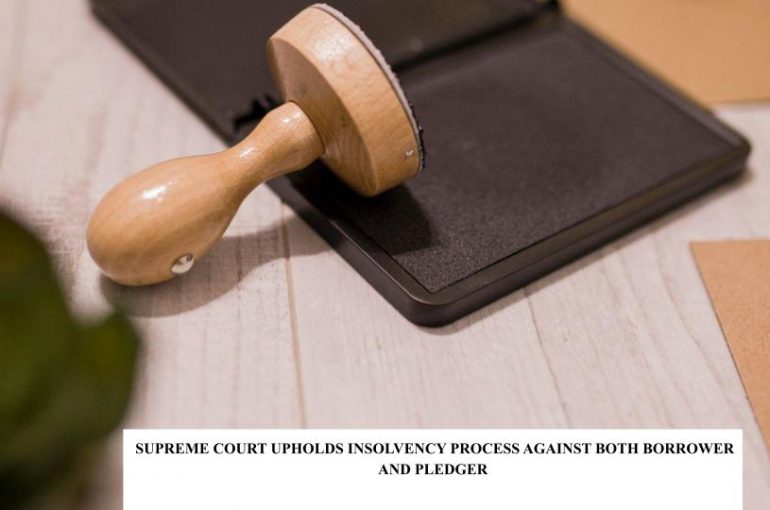 SUPREME COURT UPHOLDS INSOLVENCY PROCESS AGAINST BOTH BORROWER AND PLEDGER

A two Judge Bench of the Hon’ble Supreme Court of India comprising of Justice Indira Banerjee and Justice J.K. Maheshwari decided on 22.09.2022 in the matter titled as Maitreya Doshi vs. Anand Rathi Global Finance Ltd. and Anr in Civil Appeal No. 6613 of 2021 that if there are two borrowers that fall within the ambit of corporate debtors, proceedings under Section 7 of the Insolvency and Bankruptcy Code, 2016 (IBC) can be initiated against both the borrowers / debtors.

The Respondent, Anand Rathi Global Finance Ltd., a Non- Banking Financial Company (Financial Creditor) and M/s Premier Limited (Premier) entered into three separate Loan-cum-Pledge Agreements hereinafter referred as (Agreement), dated 29.06.2015, 04.05.2016 and 05.10.2016 respectively for disbursal of loan of Rs. 6 Crores. For security of the loan, shares were pledged by one, M/s Doshi Holding (Appellant) in favor of the Financial Creditors.

The Appellant claimed that the Agreements included two separate transactions—the disbursal of loan to Premier and the formation of pledge by Doshi Holdings which were analyzed and combined in one document for the sake of convenience.

Due to failure in making repayments in terms of the Agreement, the Financial Creditors called upon Premier to repay its overdue of Rs. 7, 64, 60,360/- within eight months dated from 28.06.2019 to 10.02.2020.  However, Premier did not take any action for the repayment. So, Financial Creditors on 14.02.2020 decided to call upon Premier and Doshi Holdings (Borrowers), to pay the entire outstanding loan amount.

On 19.02.2022 via a Letter, Premier admitted and stated that by the reason of bona fide difficulty, it could not pay outstanding dues to the Financial Creditor.  For default in repayment of Rs. 8, 35, 25,398/-, the Financial Creditor on 21.09.2020, filed a Petition under Section 7 of the IBC being C.P.(IB) No.1224/MB/2020 before National Company Law Tribunal, (NCLT) Mumbai for initiation of Corporate Insolvency Resolution Process (CIRP). Parallely, based on same loan document, another Petition was filed against Doshi Holdings, under Section 7 of the IBC, for initiation of CIRP in respect of the same claim of Rs. 8,35,25,398/-, by the Financial Creditors.

The NCLT heard both the Petitions together which was filed by the Financial Creditor on same date for same cause of action and relief. Both the Petition for initiating CIRP against Premier were admitted vide NCLT Order dated 29.01.2021.

Aggrieved by the NCLT Order dated 29.01.2021, Doshi Holding (Appellant) filed an Appeal under Section 61 (Appeals and Appellate Authority) of IBC before the National Company Law Appellate Tribunal (NCLAT). However, on merits of the case, the NCLAT vide Order dated 25.08.2021 upheld the NCLT Order of admission of Section 7 Petition.

The Appellant aggrieved by the NCLAT Order dated 25.08.2021 approached the Apex Court in Appeal. Mr. K.V. Vishwanathan, learned Senior Counsel appearing on behalf of the Appellant submitted that the loan were disbursed to Premier by the Respondent and no part of loan amount was utilized by the Appellant. Premier and the Appellant entered into the Agreement with the Respondent in separate entity and capacity. For the sake of convenience, the Premier (Borrower) and the Appellant (Pledger) have collectively been referred to as Borrowers.

Further it was submitted that under the Indian Contract Act, 1871 definition of ‘Contract of Indemnity’, ‘Contract of Guarantee’ and ‘Pledge’. All these terms have different connotation in legal sense and they can’t be equated or treated same. This differentiation implies that the creation of pledge of shares of the Corporate Debtor did not and cannot amount to a guarantee and/or indemnity under Section 5(8) (Financial Debt) of the IBC.

The Respondent was represented by Adv. Prateek Sakseria, who submitted that there is presence of dual capacity in the role and responsibility of the Appellant i.e. as pledger and as well as co-borrower as per the Agreement.  More importantly the Appellant was the Director of both entities i.e. Premier and Doshi Holdings.

Also based on the interpretation of the Agreement and supporting documents, the NCLAT came to the conclusion that Doshi Holdings is a Co-Borrower itself.

Aggrieved, the Appellant- Pledger approached the Supreme Court, which passed a Judgment dated 22.09.2022 and observed as follows:-

Thus, based on the aforesaid grounds, the Supreme Court held that as the final fact finding Authority, i.e. NCLAT has concluded upon the facts and hence, the Apex Court would not interfere with the same. Further, the interpretation of law by NCLAT in its Order dated 25.08.2021 was also upheld.