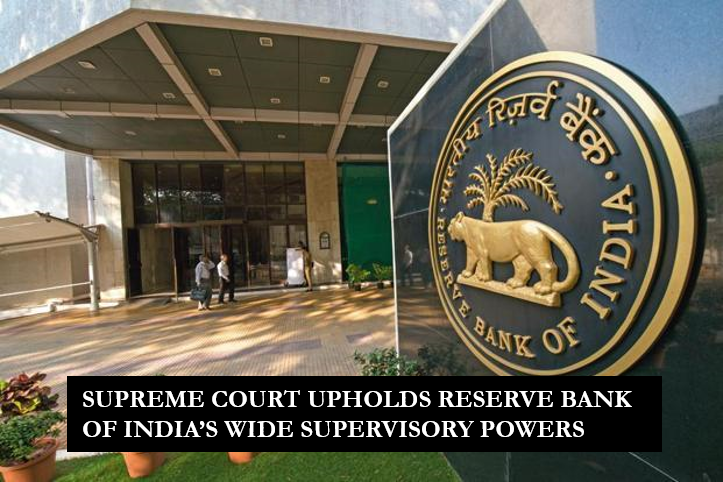 A Two Judge Bench of the Hon’ble #SupremeCourt of India comprising of Justices R. Subhash Reddy and Hrishikesh Roy passed a Judgment dated 03-01-2022 in the case of Small Industries Development Bank Of India Vs M/S. Sibco Investment Pvt. Ltd. {Civil Appeal No. 8 of 2022 (Arising out of SLP(C) No.6533 of 2020)} and held that “#RBI has wide supervisory powers over #financialinstitutions like #SIDBI, in furtherance of which, any direction issued by the RBI, deriving power from the RBI Act or the Banking Regulation Act is statutorily binding.”

In the present case, M/s. SIBCO Investment Pvt Ltd (Plaintiff) had purchased Bonds in the form of Promissory Notes issued by the Small Industries Development Bank of India (SIDBI) (Defendant) being SIDBI Bonds 2003 (4th Series) carrying 13.50% interest and SIDBI Bonds 2004 (5th Series) carrying 12.50% interest. It was agreed that the 4th Series will be redeemed on 21-12-2003 and 5th Series Bonds will be redeemed on 21-12-2004. The Plaintiff purchased 15 Bonds (interest payable @ 13.50%) and 26 Bonds (interest payable @12.50%) of face value of Rs. 10,00,000/- each for an aggregate price of Rs. 3.69 Crores on 01-07-1998 from one Mr. Shankar Lal Saraf, who in turn had purchased the 41 Bonds from one, CRB Capital Markets Ltd in 1997. CRB Capital had initially purchased these Bonds from SIDBI in 1993. CRB Capital eventually ended up in winding up proceedings initiated by the Reserve Bank of India (RBI) in the Company Court at Delhi High Court.

The Ld. Company Court observed vide Judgment dated 17-12-2004 that the subject Bonds are beyond the purview of the liquidation proceeding and directed Mr. Shankar Lal Saraf to put up the matter before the Defendant.

Accordingly, around 17-02-2005, the Bonds were presented to the Defendant.

Later on, during an audit, the Plaintiff demanded a delayed payment of interest from the Appellant. However, the Defendant refused to allow the same stating that the Reserve Bank of India had issued a facsimile directing Defendant not to transfer or otherwise deal with any security invested by CRB Capital and its group Companies without prior permission of the Official Liquidator appointed by the Company Court.

Aggrieved, the Plaintiff filed a Civil Suit claiming delayed redemption of the Bonds. The Trial Court while dismissing the suit noted that “there is a clear stipulation against affecting any transfer, register any lien or otherwise deal with, the securities of CRB Capital with further stipulation that it should not part with the interest, dividend or principal without the permission of the Official Liquidator.”

However, the High Court reversed the Trial Court’s Order and directed the Defendant to pay the interest amount from the date of accrual on the Bonds. Aggrieved, an Appeal was filed in the Hon’ble Supreme Court of India.

After taking into consideration the facts of the case and the Arguments advanced by the Parties to the dispute, the Bench observed that “it is not necessary for RBI to mention a specific provision before issuing directions, for it to have statutory consequences. All that is required is the authority under the law, to issue such direction. Hence, it is undisputed that any direction by the RBI, is compelling and enforceable similarly like the provisions of the RBI Act by its very nature.”

While disposing the Appeals, the Apex Court made the following observation:

1) “the defendant was justified in withholding payment, as they were under RBI’s direction to do so

3) due payment was promptly made to the plaintiffs upon settlement of rights by the court. Moreover, the concerned transactions were during the “suspect spell”. This in our view shows that the defendant acted bona fide and there was no undue delay on their part, to remit the dues.”