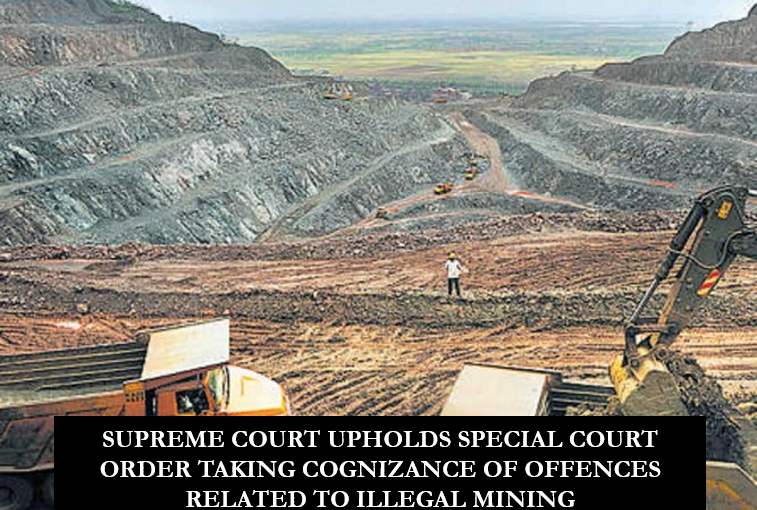 A three Judge Bench of the Supreme Court comprising of J. Dr Dhananjaya Y Chandrachud, J. Vikram Nath and J. B V Nagarathna passed a Judgment dated 29-11-2021 in Pradeep S. Wodeyar vs the State of Karnataka Criminal Appeal No. 1288-1290 of 2021 in respect of an order of cognizance taken by the Special Court, at Bengaluru City pertaining to offences related to illegal mining under the Indian Penal Code 1860 (IPC) and Mines and Mineral (Development and Regulation) Act 1957 (Act).

In this case, one, Canara Overseas Limited (Company) entered into an Agreement with Mr. K. Ramappa, the Owner of Mineral Miners and Traders, Bellary for the purpose of purchasing iron ore and selling the same in India and overseas. In pursuance of the Agreement, the Company purchased Iron-Ore and exported some to China in 2009-10 and sold the remaining to other companies in India. These transactions involved removal of Iron-Ore from Bellary, stocking of Iron-Ore in unauthorised stockyards without bulk permits and transportation of Iron-Ore without authorised forest pass. It has been further alleged that the transportation and export of Iron-Ore was carried out without obtaining requisite permits from the Forest Department and the Department of Mines and Geology.

A Petition has been filed under Article 32 of the Constitution of India 1950 in the Supreme Court in respect of the large-scale illegal mining in Andhra Pradesh and Karnataka, transportation of Iron-Ore and illegal encroachment in forest areas, against the Company represented by its Managing Director, Mr. Pradeep Wodeyar (Accused 1), Mr. Lakshminarayan Gubba, Director of the Company (Accused 2), Mr. K. Ramappa, Owner of Mineral Miners and Traders, Bellary (Accused 3), Mrs. Shanthalakshmi Jayaram, the Mine Owner and its Agent, Mr. J. Mithileshwar (Accused 4 and 5). Based on a Report filed by the Central Empowered Committee dated 07-01-2011, the Apex Court directed investigation by the Central Bureau of Investigation (CBI) on 16-09-2013. Further, the Government of Karnataka also entrusted the investigation to a Special Investigation Team, Lokayukta (SIT) on 22-11-2013.

Thereafter, an FIR was registered on 09-10-2014 by SIT against the Accused 1-5 and Charge-Sheet was submitted. Based on the FIR and Final Report, etc, a case was registered for the following offences against the Accused 1-5 by the 23rd Additional City Civil Sessions Judge and Special Judge for Prevention of Corruption Act at Bengaluru City (Special Court), vide Order dated 30-12-2015 (Cognizance Order):

Thereafter, the Accused 1-5 instituted proceedings under Section 482 of the Code of Criminal Procedure 1973 (CrPC) on 20-03-2017 before the Karnataka High Court seeking quashing of the criminal proceedings initiated against them. The High Court dismissed the said Petitions filed the Accused, vide Judgment dated 12-11-2020.

Aggrieved, the Accused filed Special Leave Petitions before the Supreme Court claiming that (a) the Special Court is not empowered to take cognizance of the offences, unless the Magistrate commits the case to it and (b) the Special Court cannot conduct joint trial of the offences under the Act and CrPC, and hence, the Accused sought to set aside the Cognizance Order.

1) That as per Section 193 CrPC, Except as otherwise expressly provided by this Code or by any other law for the time being in force, no Court of Session shall take cognizance of any offence as a Court of original jurisdiction unless the case has been committed to it by a Magistrate under this Code. Hence, in terms of Section 193 CrPC, the Special Court in this case (which is a Sessions Court) did not have the authority to take cognizance of the offences, as the Magistrate did not commit the case to it and as there is no express provision in CrPC or the Act that provides power to the Special Court to directly take cognizance of the offences.

2) However, in terms of Section 465 CrPC, a finding or order is not reversible due to irregularities, unless a failure of justice is proved. Hence, in order to prove failure of justice, the Accused has to establish that the irregularity, i.e. the Special Court taking cognizance of the offences, has caused prejudice to the Accused. In this case, the Supreme Court observed that the Accused did not raise any objection pertaining to the Cognizance Order before the Special Court and the High Court. This objection has been raised for the first time before the Apex Court. Therefore, even though the Cognizance Order is irregular, it would not vitiate the criminal proceedings initiated against the Accused in view of Section 465 CrPC.

3) Further, Section 22 of the Act provides that No court shall take cognizance of any offence punishable under this Act or any rules made thereunder except upon complaint in writing made by a person authorised in this behalf by the Central Government or the State Government. In this regard, the Government of Karnataka issued a Notification dated 21-01-2014 which authorizes the Sub-Inspector of Police to make a written complaint for the purpose of Section 22 of the Act. In this case, FIR was signed by the authorised Sub-Inspector of Police, Karnataka Lokayukta and based on the said FIR, Final Report, witness statements and connected documents, the Special Court took cognizance of the offences under the Act. Hence, the criteria for taking cognizance of offence under Section 22 of the Act has been duly complied with.

4) Further, the Special Court is empowered to conduct joint trial offences both under the Act and CrPC. Otherwise, if the offences are tried separately by different fora though they arise out of the same transaction, there would be a multiplicity of proceedings and wastage of judicial time, and may result in contradictory judgments.

Thus, based on the aforesaid grounds, the Supreme Court held that the Special Court while passing the Cognizance Order has applied its mind based on various documents including the FIR which has been duly signed by an Officer authorised by the Government of Karnataka. As a result, the Apex Court upheld the Cognizance Order and dismissed the Appeals.