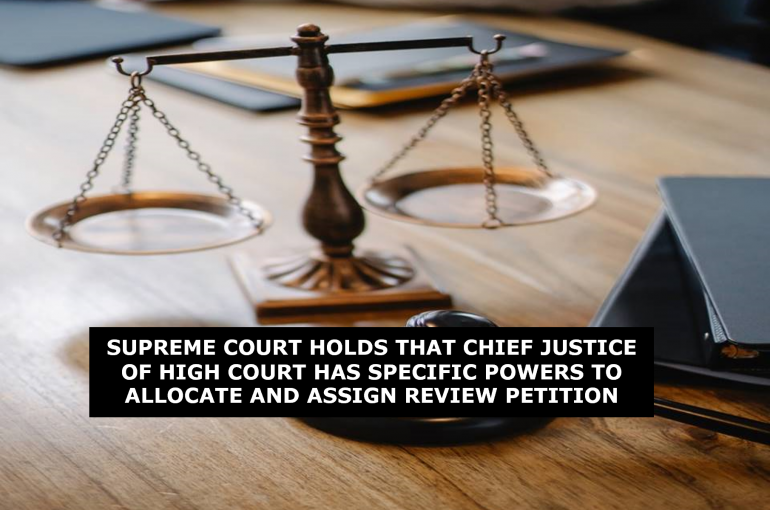 Recently, a two Judge Bench of the Supreme Court comprising of Justice Vikram Nath and Justice Aniruddha Bose passed a Judgment dated 10-11-2022 in Suresh G. Ramnani Vs. Aurelia Ana De Piedade, Miranda @ Ariya, Alvares (Dead Thr. Lrs) & Ors. arising out of SLP (Civil) No. 20623 of 2019, and held that if an application is filed by any of the parties that a review may be heard by the Judge who had passed the order from which the review arose, the matter ought to be placed before the Chief Justice of the said High Court for allocation of review petition to the concerned Judge.

Aggrieved by the Trial Court Judgment and Order, Suresh G. Ramnani (“Appellant”) preferred a Civil Appeal No. 83 of 2013 under Section 96 (“Appeal from original decree”) of the Code of Civil Procedure, 1908 (“CPC”) in the Court of District Judge at Margao, Goa (“First Appellate Court”). After the contest, the First Appellate Court dismissed the said Appeal No. 83 of 2013 vide Judgment and Order dated 22.04.2008.

Dissatisfied by the said Judgment and Order dated 22.04.2008, the Appellant preferred a Second Appeal at the Goa Bench of the Bombay High Court (“High Court”) under Section 100 CPC (“Second Appeal”). The High Court allowed the said Appeal and remanded the matter to the First Appellant Court for fresh hearing and decision thereto. After the hearing, the First Appellant Court dismissed and remanded the Appeal vide Judgment and Order dated 09.07.2012.

Thereafter, the Appellant again preferred a Second Appeal bearing No. 98 of 2013 in the High Court. Justice G.S. Patel (“Justice Patel”) of the High Court reserved Second Appeal vide Judgment and Order dated 10.12.2017. Here it must be noted that Justice Patel returned to the Principal Bench at Bombay on 24.10.2017. Further on 01.11.2017, certain clarifications were made before the Justice Patel by the Parties regarding the issue of whether the Parties are arriving at a settlement or not and consequently the Second Appeal was allowed vide Judgment and Order dated 30.01.2019.

Later, the Respondent filed Review Petition No. 7 of 2019 on 12.02.2019 before Justice Nutan D. Sardessai (“Learned Single Judge”) and the same was admitted on 04.03.2019. Meanwhile, the Appellant on 16.07.2019 registered Civil Application No. 526 of 2019 with the prayer that the Civil Review Application No.7 of 2019 was ordered to be transferred and be placed before Justice Patel for final disposal. However, the said Application got rejected vide Impugned Order dated 16.07.2019. The matter went up to the Supreme Court:-

The present matter was concerned specifically with question of interpretation of the rule and jurisdiction and not related to any factual issue. Further there is no need to entertain the issue of interpretation in order to hold as to whether the review should be heard by Judge ‘A’ or any other Judge.

However, the Supreme Court elaborately discussed that once an application was preferred by any of the parties that a review may be heard by the Judge who had decided the matter and had passed the order from which the review arose, the matter ought to have been placed before the Chief Justice on the administrative side rather than order being passed on the judicial side. Also, The Chief Justice as the ‘Master of the Roster’ conferred with specific powers to allocate and assign review petitions.

Thus, the Civil Application No. 526 of 2019 ought to have referred to the Chief Justice of the concerned High Court and not before learned Single Judge. As a result, Appeal was allowed and Order dated 16.07.2019 passed by the Ld. Single Judge of the High Court was set aside.