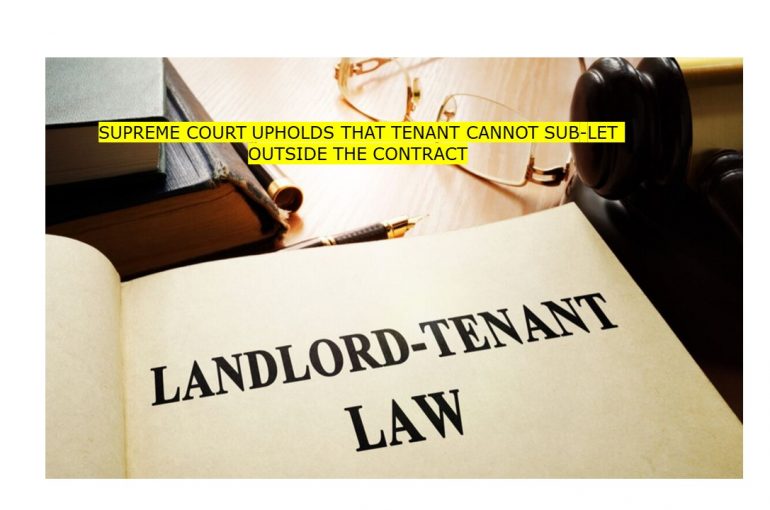 SUPREME COURT UPHOLDS THAT TENANT CANNOT SUB-LET OUTSIDE THE CONTRACT

In a recent Special Leave to Appeal (SLP) (Civil), a two Judge Bench of the Supreme Court, comprising of Justice K.M. Joseph and Justice Hrishikesh Roy, passed a Judgement dated 02.08.2022 in ‘Shabbir Mohammad Sayed v. Mrs. Noor Jehan Mushter Shaikh & Ors., SLP (Civil) No. 32161-32162 OF 2018’ and held that it will not be lawful for a tenant to sublet or to give on license or to assign or transfer in any other manner his interest in the whole or any part of the premises rented out to him.

The Apex Court considered Section 26 of the Maharashtra Rent Control Tenancy Act 1999 (the Act). Section 26 states that in absence of contract, a tenant cannot sub-let or transfer or give on licence. The Supreme Court observed that the law giver has provided that, it will not be lawful for a tenant to sublet or to give on license the whole or any part of the premises let out to him or to assign or transfer in any other manner his interest. The Apex Court further observed that while under the general law, subject to there being no contract to the contrary, a tenant can assign, sublease or mortgage his rights as lessee, on the other hand, in regard to a tenancy governed by the Act, the ordinary rule is that a tenant cannot sublet, give on licence or assign or transfer in any other manner subject to a contract to the contrary.

The Supreme Court held that agreement relied upon by the Appellant dated 24.01.2014, would be illegal on the face of it unless a contract to the contrary was established. The alleged agreement by the so-called
tenant in favour of the Appellant was concerned, was held to be prohibited under Section 26. There was no express contract to the contrary to rescue the Appellant. Accordingly, the Supreme Court dismissed the appeal and upheld the Order of the High Court.