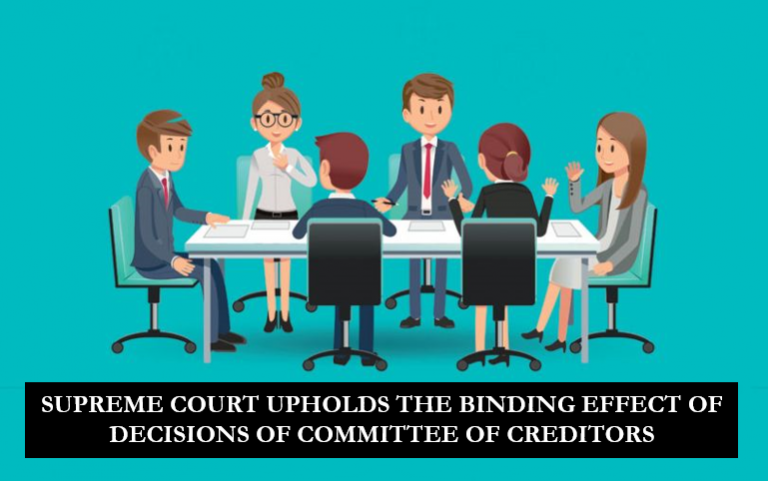 The Two-Judge Bench of the #SupremeCourt comprising of J. Dr Dhananjaya Y Chandrachud and J. M R Shah, has in a recent case of Pratap Technocrats (P) Ltd. & Ors. vs Monitoring Committee of Reliance Infratel Limited & Anr. passed a #Judgment dated 10-08-2021 and decided upon the primary issues (a) whether exclusion of certain #financialcreditors from the committee of creditors (#COC) by the National Company Law Tribunal (#NCLT) would have any implication on the decision already taken by COC to approve a #resolutionplan and (b) whether NCLT or Appellate Authority may judicially review the COC decision to approve the resolution plan. ​

In this case, NCLT Mumbai passed an Order dated 15-05-2018 in respect of commencement of corporate insolvency resolution process (CIRP) of Reliance Infratel Limited (Corporate Debtor). An interim resolution professional (IRP) was appointed on 18-05-2018, who issued a public announcement on 21-05-2018 to invite claims from the creditors of the Corporate Debtor. Owing to a challenge against the aforesaid NCLT Order, the CIRP was stayed and later, resumed on 07-05-2019. The IRP issued a second public announcement on 07-05-2019 and a COC was constituted on 24-05-2019. The COC later replaced the IRP with Mr. Anish Niranjan Nanavaty as the Resolution Professional (RP), which was confirmed by the NCLT on 21-06-2019.

The RP invited for expressions of interest (EOI) from prospective resolution applicants on 15-07-2019. Around 15 EOIs were received by RP, the details of which were furnished to COC on 16-08-2019. Thereafter, a series of resolution plans were submitted by Bharti Airtel Ltd, Reliance Digital Platform & Project Services Limited, VFSI Holdings Pte. Ltd and UV Asset Construction Company Ltd.

The resolution plan submitted by Reliance Digital Platform & Project Services Limited (Resolution Plan) was approved with a 100 per cent voting share of the COC, on the ground of “feasibility, viability and implementability” and upon due verification of its eligibility under Section 29A of the Insolvency and Bankruptcy Code 2016 (IBC), in the COC Meeting of 02-03-2020.

Meanwhile, one of the financial creditors of the Corporate Debtor, i.e. Doha Bank challenged the decision of RP that recognised certain indirect lenders as financial creditors, before the NCLT. Pending hearing in this challenge, the NCLT approved the Resolution Plan vide Order dated 03-12-2020, as it has been unanimously approved by COC. However, the NCLT held that the distribution of payments to creditors shall be subject to orders to be passed in the said challenge.

The Appellant-Operational Creditor, namely, Pratap Technocrats (P) Ltd. was aggrieved by the NCLT Order dated 03-12-2020 approving the Resolution Plan, as their claims had not received a fair and equitable treatment and that substantial claims of nearly Rs 120 Crores have been rejected in the Resolution Plan. Hence, the Appellants filed an Appeal before the National Company Law Appellate Tribunal (NCLAT).

The NCLAT passed a Judgment dated 04-01-2021 and dismissed the Appeal on the ground that “equitable treatment can be claimed only by similarly situated creditors”. Further, the NCLAT observed that the approved Resolution Plan needs to be revised as it provided for payment of 19.62% towards operational creditors’ verified claims and only 10.32% towards financial creditors’ verified claims.

Aggrieved by the NCLAT Judgment dated 04-01-2021, the Appellants filed an Appeal under Section 62 IBC before the Supreme Court.

The Apex Court made the following observations in this case about the primary issues (a) whether exclusion of certain financial creditors from COC by the NCLT would have any implication on the decision already taken by COC to approve the Resolution Plan and (b) whether NCLT or NCLAT may judicially review the COC decision, based on the submissions of the Appellant that their claims had not received a fair and equitable treatment:

1) That the proceedings initiated by Doha Bank in NCLT have no implication on the status of approval of Resolution Plan, as it has been approved unanimously with 100% voting share in COC. Thus, the exclusion of such indirect lenders from the list of financial creditors by the NCLT, resulting in exclusion from COC, would have no bearing on the Resolution Plan, as even after their exclusion, the Resolution Plan continues to be approved with a 100 per cent majority by the remaining COC members.

3) Further, as per Section 31 IBC, COC decisions are binding on the Corporate Debtor and its employees, members, creditors, including Central / State Government / any local authority to whom statutory dues are owed, and guarantors and other stakeholders involved in the resolution plan.

4) That the NCLT or NCLAT cannot sit in judicial review or interfere with the commercial wisdom or business decisions taken by COC in approving or rejecting a resolution plan.

5) That the ambit of NCLT under Sections 30 (2) and 31 IBC is to determine that the amount payable to operational creditors under the resolution plan is consistent with the said provisions:

(i) the amount to be paid to such creditors in the event of a liquidation of the corporate debtor under section 53; or

(ii) the amount that would have been paid to such creditors, if the amount to be distributed under the resolution plan had been distributed in accordance with the order of priority in sub-section (1) of section 5

7) Hence, if Section 30 (2) IBC requirements are fulfilled, the distribution as per the provisions of law is to be treated as fair and equitable to the operational creditors.

Therefore, in the present case, the Supreme Court upheld the decisions of the NCLT and NCLAT for being in accordance with law. As a result, the Appeal was dismissed by the Apex Court.