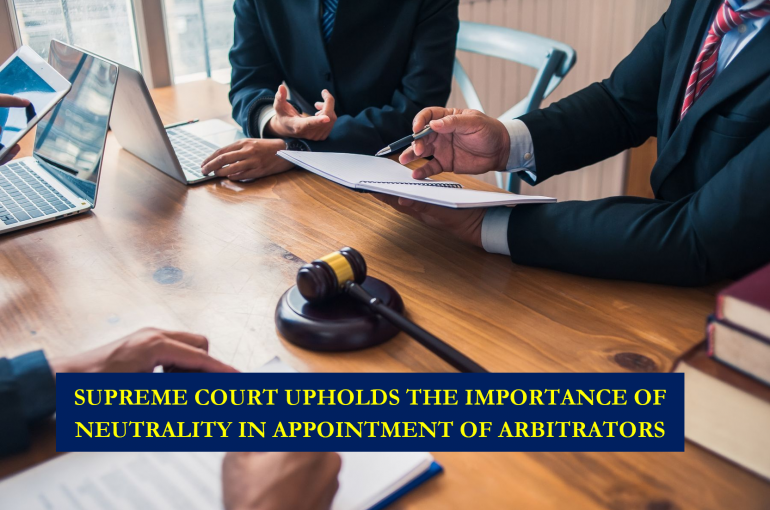 SUPREME COURT UPHOLDS THE IMPORTANCE OF NEUTRALITY IN APPOINTMENT OF ARBITRATORS

The Division Bench of the Hon’ble Supreme Court comprising of Justice M.R. Shah and Justice B.V. Nagarathana, in the matter of Ellora Paper Mills v. State of Madhya Pradesh (Civil Appeal No. 7697/2021) has passed a Judgement dated 04.01.2022, thereby setting aside the Order of the Hon’ble High Court of Madhya Pradesh dated 27.08.2021, whereby the High Court dismissed the Application filed by Ellora Paper Mills (herein referred as ‘Appellant’) seeking appointment of fresh arbitrator under Section 11 of the Arbitration and Conciliation Act, 2015 (Herein referred as ‘Arbitration Act’) (Appointment of Arbitrators) read with Section 14 (Impossibility to act) and Section 15 of the Arbitration Act (Termination of mandate and substitution of Arbitrator).

The State of Madhya Pradesh (herein referred ‘Respondent’) had issued a Tender for cream woven paper and duplicating paper in year 1993-1994. The Appellant herein participated in the Tender and got a Supply Order on 22.09.1993. The Appellant alleged that they supplied the Order as per specifications, however, the Respondents rejected some consignments without stating any reasons thereof and made only 90% of the total payment. The Respondent vide Letter dated 15.11.1993 replied to the Appellant that the paper quality was sub-standard and hence it could not be utilised.

Thereafter, the Appellant filed a Civil Suit in Bhopal seeking permanent injunction so as to prevent the Respondent to allot the Order to any third party. But in the meantime, the Respondent allotted the remaining Order to a third party and hence the Suit became infructuous.

The Appellant then filed another Civil Suit in Bhopal, contending that since there is an Arbitration Clause in the Agreement, therefore the present Civil Proceedings should be stayed. The Civil Court dismissed the above Suit, against which the Appellant preferred a Revision Petition before the Hon’ble High Court of Madhya Pradesh which was allowed.  On the orders of the High Court, the Stationary Purchase Committee (herein referred as ‘Committee’) was constituted to carry out arbitration between both Parties. The Committee comprised of Respondent members exclusively.

The Appellant filed its objections to the constitution and jurisdiction of the Committee by moving an Application under Section 13 of the Arbitration Act (Challenge procedure) before the Committee on 12.09.2000, which was dismissed via Order dated 02.02.2001.

Subsequently, the Appellant filed an Application with Hon’ble High Court under Section 11, 14 and 15 of the Arbitration Act, seeking termination of the Stationary Purchase Committee as it comprised only of the Respondent’s Company members and also sought appointment of new Arbitrator.

1) The Committee was constituted by the High Court in year 2001, but proceedings could not be initiated as in view of the number of proceedings filed by the Appellant. During the pendency of the proceedings, the Arbitrators of the said Committee retired, therefore it can be said that no arbitration proceedings took place after 2001.

2) The personnel appointed by the Committee for arbitration comprised of High Ranking Officials of the post of Secretaries and Dy. Secretaries which were working in the Respondent Company. The Court emphasising on the aspect of neutrality of Arbitrators dealt in Section 12(5) of the Arbitration Act (Grounds for Challenge) read with 7th Schedule of the Arbitration Act, also relied upon Jaipur Zila Dugdh Utpadak Sahkari Sangh Limited v. Ajay Sales & Suppliers, 2021 SCC OnLine SC 730 stating that:

“….14. It is further observed and held by this Court in the aforesaid decision that independence and impartiality of the arbitrator are the hallmarks of any arbitration proceedings. Rule against bias is one of the fundamental principles of natural justice which apply to all judicial and quasi-judicial proceedings. It is further observed that it is for this reason that notwithstanding the fact that relationship between the parties, to the arbitration and the arbitrators themselves are contractual in nature and the source of an arbitrator’s appointment is deduced from the agreement entered into between the parties, notwithstanding the same non independence and non-impartiality of such arbitrator would render him ineligible to conduct the arbitration…..”

The Supreme Court, based on the aforesaid observations, dismissed the Order dated 27.08.2021 passed by the High Court of Madhya Pradesh. The Apex Court further appointed an Arbitrator to expedite the Arbitration Proceedings.

In light of the present case, the Hon’ble Supreme Court has reiterated the importance of neutrality of Arbitrator in an Arbitration Proceeding and violation of the same, would be against the Principles of Natural Justice.