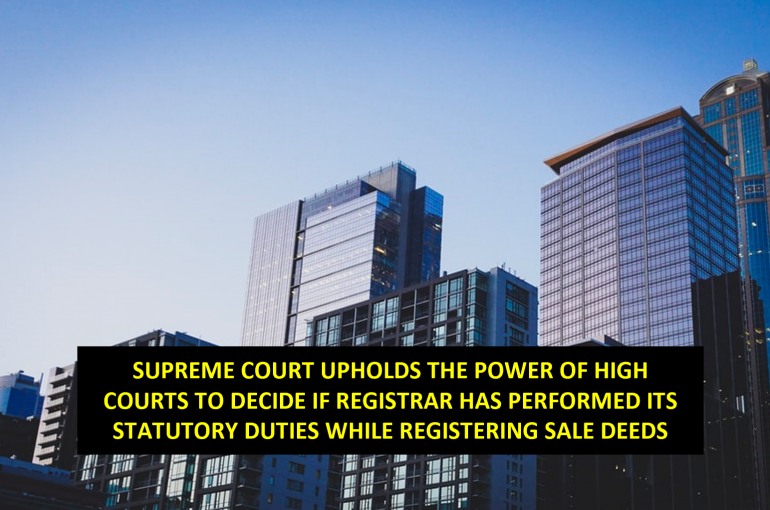 A Two Judge Bench of the Supreme Court comprising of J. Hemant Gupta and J. V. Ramasubramanian passed a Judgment dated 04-05-2022 in the matter of Asset Reconstruction Company (India) Limited Versus S.P. Velayutham & Ors., Civil Appeal Nos.2752­-2753 of 2022, and observed that the High Court would have powers to exercise jurisdiction under Article 226 of the Constitution of India to determine if the Registering Officer has failed to perform his statutory duties of registering a sale deed as per procedure established by law.

In this case, Indian Bank had sanctioned certain loan facilities to M.V.R. Group of Industries (Company) in 1992. Against the said loan, the Company mortgaged an immovable property as collateral security. As a result, mortgage by deposit of title deeds was created in 1995-96. Thereafter, when the Company defaulted in repayment of loan, the Bank filed an Application under Section 19 (Application to the Tribunal) of Recovery of Debts Due to Banks and Financial Institutions Act, 1993 (1993 Act) before the Debts Recovery Tribunal (DRT) at Madras.

Based on the registered POA dated 23-08-2006, which did not confer power to sell the Company property, Mr. S.P. Velayutham sold the property to his son, Mr. Amar by way of Sale Deed dated 05-07-2007. The said Sale Deed was registered before the SRO.

Aggrieved, the Appellant, during the pendency of the aforesaid cases before DRT, filed a Writ Petition bearing W.P.No. 33462 of 2014 before the Madras High Court seeking declaration that the act of the SRO in registering the sale deed executed by Mr. S.P. Velayutham in favor of his son, Mr Amar, as null and void, on the ground that such a sale was effected on the basis of the registered POA dated 23-08-2006 executed by the Company in favor of Mr. S.P. Velayutham, which did not confer power to sell the Company property to the Agent.

The Learned Single Judge of the Madras High Court allowed the said Petition vide Order dated 04-01-2016, as the SRO did not follow the mandate of the law prescribed under Section 32 of the Registration Act 1908 (Persons to present documents for registration) and Section 35 of the Registration Act 1908 (Procedure on admission and denial of execution respectively), while registering the sale deed without verifying the POA dated 23-08-2006.

Aggrieved by the said Order of the Single Judge dated 04-01-2016, the Respondents, Mr. S.P. Velayutham and his son, Mr Amar filed Writ Appeals bearing W.A.No.59 of 2016 and W.A.No.60 of 2016 before the Division Bench of the High Court. The said Appeals were allowed vide Judgment dated 28-09-2021 on the ground that the Appellant should have taken a recourse to a civil suit and not a writ petition.

Aggrieved by the Judgment dated 28-09-2021 passed by the Division Bench of the High Court, the Appellant filed an Appeal before the Supreme Court. The Apex Court passed a Judgment dated 04-05-2022 and made the following observations in this case:

1) That ‘registration of deeds and documents’ falls under the Concurrent List of the Seventh Schedule of the Constitution.

Hence, although the Registration Act is a Central Act, the State Governments have power to make amendments thereto. Thus, in this case, interpretation of the Act has been made specific to the State in litigation, i.e. State of Tamil Nadu.

6) That in this case, the registered POA dated 23-08-2006, on the basis of which, the Sale Deed dated 05-07-2007 was executed and registered before the SRO, did not provide the power to the Respondent-Agent to sell the property on behalf of the Company or to appear before the SRO for the purpose of sale of property as an agent.

Thus, based on the aforesaid observations, the Supreme Court held that the SRO was obliged to verify the details of the registered POA dated 23-08-2006 before registering the Sale Deed. Failing which, the High Court has powers under Article 226 to determine whether the Registering Officer has failed to perform his statutory duties of registering a sale deed as per procedure established by law. In case the Appellant would have resorted to a civil suit for declaration of Sale Deed as null and void, the civil court could have only decided upon the issue whether the agent was at fault in executing the Sale Deed without any power thereto, but not decide upon the issue whether the Registering Officer failed to perform his duties properly or not. Therefore, the High Court’s jurisdiction under Article 226 cannot be said to be ousted in such case.

Hence, the Apex Court allowed the Appeals and thereby, upheld the Order of the Single Judge dated 04-01-2016 and dismissed the Impugned Judgment dated 28-09-2021 passed by the Division Bench of the High Court.