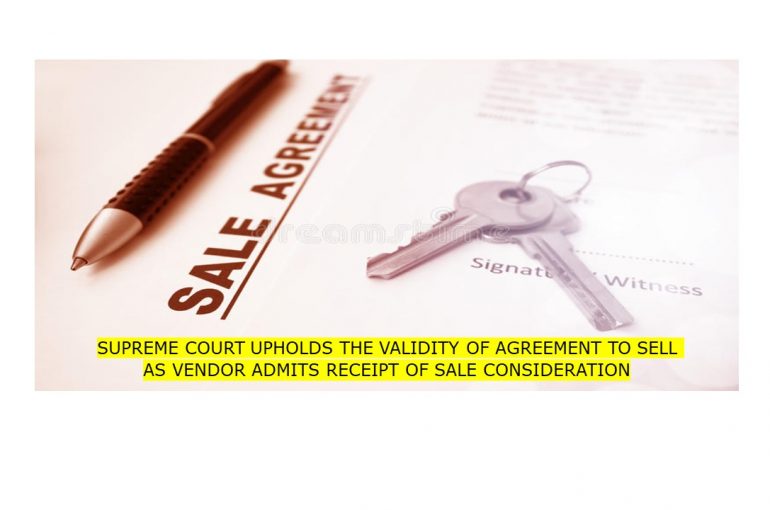 A Division Bench of the Supreme Court, comprising of Justice M.R. Shah and Justice B.V. Nagarathna, passed a Judgement dated 11.04.2022 while deciding the case of P. Ramasubbamma v. V. Vijaylakshmi & ors., Civil Appeal No. 2095 of 2022 and held that once the execution of agreement to sell and the payment/receipt of advance sale consideration is admitted by the vendor, thereafter nothing further is required to be proved by the vendee.

The Trial Court, after appreciating the evidence and the witnesses placed on record, passed a Decree for Specific Performance of the Contract vide Order dated 01.12.2014 on the ground that the Respondent No. 1 who is the original owner of the Suit Property has admitted to have entered into the Agreement to Sell with the Appellant.

The Appellant preferred an Appeal against this Order of the High Court, before the Supreme Court. The Respondents did not contest the Appeal and hence the Apex Court proceeded ex-parte.

The Supreme Court, observed that Respondent No.1 is the original owner of the Suit Property and has admitted to have entered into a Contract for Sale with the Appellant. The Respondent No.1 has also admitted to the receipt of substantial advance sale consideration. The Apex Court made the observation that once the execution of agreement to sell and the
payment/receipt of advance substantial sale consideration was admitted by the vendor, thereafter nothing further was required to be proved by the Appellant/ vendee.

The Supreme Court then referred to the case of Lala Durga Parsad and Anr. Vs. Lala Deep Chand and Ors., 1954 SCR 360, in which it was held that, “In our opinion, the proper form of decree is to direct specific performance of the contract between the vendor and the plaintiff and direct the subsequent transferee to join in the conveyance so as to pass on the title which resides in him to the plaintiff. He does not join in any special covenants made between the plaintiff and his vendor; all he does is to pass on his title to the plaintiff. This was the course followed by the Calcutta High Court in Kafiladdin v. Samiraddin [AIR 1931 Cal 67] and appears to be the English practice. We direct accordingly.”

Therefore, the Apex Court held that once the execution of Agreement to Sell and the payment/receipt of advance substantial sale consideration has been admitted by the Respondent No. 1-Vendor, thereafter nothing further is required to be proved by the Appellant-Vendee. In view of the said observations, the Supreme Court allowed the Appeal and thereby set aside the High Court Judgement dated 20.07.2021 and restored the Trial Court Order dated 01.12.2014.